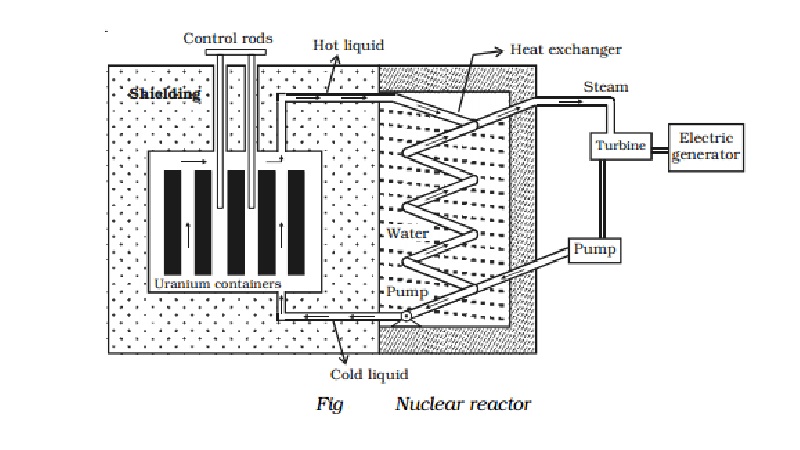 Numerous reactors of different designs have been constructed all over the world for a variety of purposes, but there exists a number of general features common to all the reactors.

A nuclear reactor is a device in which the nuclear fission reaction takes place in a self sustained and controlled manner. The first nuclear reactor was built in 1942 at Chicago USA.

Numerous reactors of different designs have been constructed all over the world for a variety of purposes, but there exists a number of general features common to all the reactors. The schematic diagram of a nuclear reactor is shown in Fig. 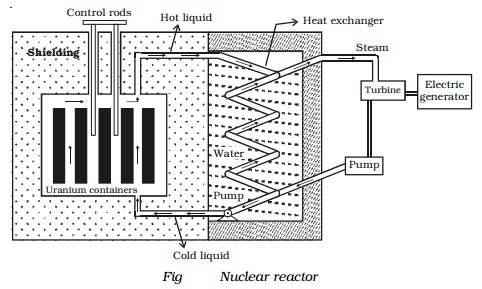 (i) Fissile material or fuel

The fissile material or nuclear fuel generally used is 92U 235. But this exists only in a small amount (0.7%) in natural uranium. Natural uranium is enriched with more number of 92U235 (2 - 4%) and this low enriched uranium is used as fuel in some reactors. Other than U235, the fissile isotopes U233 and Pu239 are also used as fuel in some of the reactors.

In the pressurised heavy water reactors (PHWR) built in our country, natural uranium oxide is used as fuel. Tiny pellets of uranium oxide are packed in thin tubes of zirconium alloy and sealed to form a fuel rod. Nineteen such rods are tied together to form a fuel bundle. The reactor vessel which goes by the name 'Calandria' has about three hundred tubes passing through it. The fuel bundles are placed in these tubes. The part of the reactor vessel which contains the fuel rods is known as reactor core.

In the pressurised light water reactors (PWR), low enriched uranium is used. In the fast breeder test reactor (FBTR) at Kalpakkam, a mixture of the carbides of uranium and plutonium is used as fuel. The fuel of the prototype fast breeder reactor (PFBR) that is being built at Kalpakkam, is a mixture of oxides of plutonium and uranium. In the fast breeder reactors, the fuel pellets are packed in special stainless steel tubes to withstand the high temperature.Kamini [Kalpakkam mini reactor] is the only operating reactor in the world which uses 92U233 as fuel. In this reactor, the fuel is an alloy of uranium and aluminium and is in the form of plates.

The function of a moderator is to slow down fast neutrons produced in the fission process having an average energy of about 2 MeV to thermal neutrons with an average energy of about 0.025 eV, which are in thermal equilibrium with the moderator. Ordinary water and heavy water are the commonly used moderators. A good moderator slows down neutrons by elastic collisions and it does not remove them by absorption. The moderator is present in the space between the fuel rods in a channel. Graphite is also used as a moderator in some countries.

In fast breeder reactors, the fission chain reaction is sustained by fast neutrons and hence no moderator is required.

A source of neutron is required to initiate the fission chain reaction for the first time. A mixture of beryllium with plutonium or radium or polonium is commonly used as a source of neutron.

The control rods are used to control the chain reaction. They are very good absorbers of neutrons. The commonly used control rods are made up of elements like boron or cadmium. The control rods are inserted into the core and they pass through the space in between the fuel tubes and through the moderator. By pushing them in or pulling out, the reaction rate can be controlled. In our country, all the power reactors use boron carbide (B4C), a ceramic material as control rod.

The cooling system removes the heat generated in the reactor core. Ordinary water, heavy water and liquid sodium are the commonly used coolants. A good coolant must possess large specific heat capacity and high boiling point. The coolant passes through the tubes containing the fuel bundle and carries the heat from the fuel rods to the steam generator through heat exchanger. The steam runs the turbines to produce electricity in power reactors.

The coolant and the moderator are the same in the PHWR and PWR. In fast breeder reactors, liquid sodium is used as the coolant. A high temperature is produced in the reactor core of the fast breeder reactors. Being a metal substance, liquid sodium is a very good conductor of heat and it remains in the liquid state for a very high temperature as its boiling point is about 1000o C.

Neutron reflectors prevent the leakage of neutrons to a large extent, by reflecting them back. In pressurised heavy water reactors the moderator itself acts as the reflector.

In the fast breeder reactors, the reactor core is surrounded by depleted uranium (uranium which contains less than 0.7% of 92U235) or thorium (90Th232) which acts as neutron reflector. Neutrons escaping from the reactor core convert these materials into Pu239 or U233 respectively.

As a protection against the harmful radiations, the reactor is surrounded by a concrete wall of thickness about 2 to 2.5 m.

92U238 and 90Th232 are not fissile materials but are abundant in nature. In the reactor, these can be converted into a fissile material 94Pu239 and 92U233 respectively by absorption of neutrons. The process of producing more fissile material in a reactor in this manner than consumed during the operation of the reactor is called breeding. A fast reactor can be designed to serve as a good breeder reactor.

(1)   Nuclear reactors are mostly aimed at power production, because of the large amount of energy evolved with fission.

(3) Nuclear reactor acts as a source of neutrons, hence used in the scientific research.