The syndrome is apparent in any condition that seriously damages the glomerular capillary membrane and results in in-creased glomerular permeability.

Nephrotic syndrome is a primary glomerular disease character-ized by the following:

·      Marked increase in protein in the urine (proteinuria)

·       Decrease in albumin in the blood (hypoalbuminemia)

The syndrome is apparent in any condition that seriously damages the glomerular capillary membrane and results in in-creased glomerular permeability.

Nephrotic syndrome can occur with almost any intrinsic renal disease or systemic disease that affects the glomerulus. Although generally considered a disorder of childhood, nephrotic syn-drome does occur in adults, including the elderly. Causes include chronic glomerulonephritis, diabetes mellitus with intercapillary glomerulosclerosis, amyloidosis of the kidney, systemic lupus ery-thematosus, multiple myeloma, and renal vein thrombosis.

Nephrotic syndrome is characterized by the loss of plasma protein, particularly albumin, in the urine. Although the liver is capable of increasing the production of albumin, it cannot keep up with the daily loss of albumin through the kidneys. Thus, hypoalbuminemia results (Fig. 45-4). 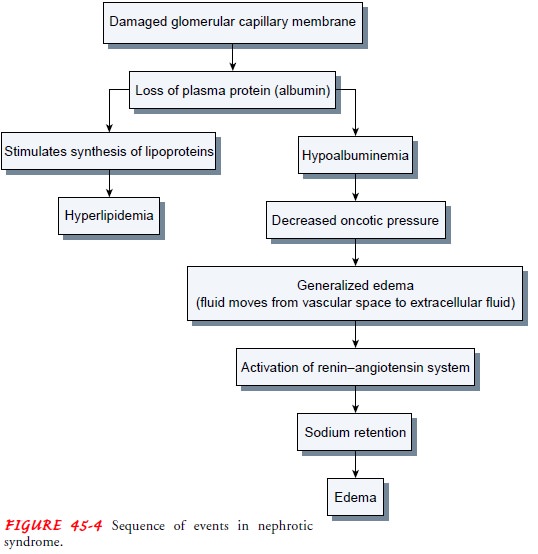 The major manifestation of nephrotic syndrome is edema. It is usually soft and pitting and most commonly occurs around the eyes (periorbital), in dependent areas (sacrum, ankles, and hands), and in the abdomen (ascites). Other symptoms, including malaise, headache, irritability, and fatigue, are common (Fogo, 2000).

Proteinuria (predominately albumin) exceeding 3 to 3.5 g/day is sufficient for the diagnosis of nephrotic syndrome. Protein elec-trophoresis and immunoelectrophoresis may be performed on the urine to categorize the type of proteinuria. The urine may also contain increased WBCs as well as granular and epithelial casts. A needle biopsy of the kidney may be performed for histologic examination of renal tissue to confirm the diagnosis. Recent stud-ies have confirmed the usefulness of serum markers as a means of assessing the disease process. Anti-C1q antibodies are the most reliable markers for assessing disease activity in lupus nephritis (Moroni et al., 2001).

Complications of nephrotic syndrome include infection (due to a deficient immune response), thromboembolism (especially of the renal vein), pulmonary emboli, acute renal failure (due to hypo-volemia), and accelerated atherosclerosis (due to hyperlipidemia).

The objective of management is to preserve renal function. Diuretic agents may be prescribed for the patient with severe edema; how-ever, caution must be used because of the risk of reducing the plasma volume to the point of impaired circulation with subsequent prerenal acute renal failure. The use of angiotensin-converting enzyme (ACE) inhibitors in combination with diuretics often reduces the degree of proteinuria but may take 4 to 6 weeks to be effective.

Other medications used in treating nephrotic syndrome in-clude antineoplastic agents (cyclophosphamide [Cytoxan]) or immunosuppressant medications (azathioprine [Imuran], chlor-ambucil [Leukeran], or cyclosporine). It may be necessary to re-peat treatment with corticosteroids if relapse occurs. Treatment of the associated hyperlipidemia is controversial. The usual med-ications used to treat hyperlipidemia are often ineffective or have serious consequences, including muscle injury.

The patient may be placed on a low-sodium, liberal-potassium diet to enhance the sodium/potassium pump mechanism, thereby assisting in elimination of sodium to reduce edema. Protein in-take should be about 0.8 g/kg/day, with emphasis on high bio-logic proteins (dairy products, eggs, meats), and the diet should be low in saturated fats (Deschenes & Doucet, 2000).

In the early stages of the disease, the nursing management is sim-ilar to that of the patient with acute glomerulonephritis, but as the disease worsens, management is similar to that of the patient with chronic renal failure (see the section that follows). The pa-tient who is receiving corticosteroids or cyclosporine requires in-structions about the medications and signs and symptoms that should be reported to the physician. Dietary instructions may also be necessary.

Patients with nephrotic syndrome need adequate instruction about the importance of following all medication and dietary reg-imens so that their condition can remain stable as long as possible. The patient must be made aware of the importance of commu-nicating any health-related change to the health care provider as soon as possible so that appropriate medication and dietary changes can be made before further changes occur within the glomeruli. When indications of an acute infection, such as an acute respiratory tract infection, are first apparent, increased doses of maintenance corticosteroids have been found to decrease the risk of relapse (Mattoo & Mahmoud, 2000).