Mitral stenosis almost always occurs as a delayed complication of rheumatic fever. However, mitral stenosis can also occur in dialysis-dependent patients. Two-thirds of patients with mitral stenosis are female. The stenotic process is estimated to begin after a minimum of 2 years following rheumatic heart disease and results from progressive fusion and calcification of the valve leaflets. Symptoms gener-ally develop after 20–30 years, when the mitral valve orifice is reduced from its normal 4–6 cm 2 opening to less than 1.5 cm2. Less than 50% of patients have isolated mitral stenosis; the remaining patients also have mitral regurgitation, and up to 25% of patients also have rheumatic involvement of the aortic valve (stenosis or regurgitation).

The rheumatic process causes the valve leaflets to thicken, calcify, and become funnel shaped; annu-lar calcification may also be present. The mitral commissures fuse, the chordae tendinae fuse and shorten, and the valve cusps become rigid; as a result, the valve leaflets typically display bowing or doming during diastole on echocardiography.

Significant restriction of blood flow through the mitral valve results in a transvalvular pressure gradient that depends on cardiac output, heart rate (diastolic time), and cardiac rhythm. Increases in either cardiac output or heart rate (decreased dia-stolic time) necessitate higher flows across the valve and result in higher transvalvular pressure gradients. The left atrium is often markedly dilated, promoting SVTs, particularly AF. Blood flow stasis in the atrium promotes the formation of thrombi, usually in the left atrial appendage. Loss of normal atrial systole withAF (which is usually responsible for 20% to 30% of ventricular filling) necessitates even higher diastolic flow across the valve to maintain the same cardiac output and increases the transvalvular gradient.

Embolic events are common in patients with mitral stenosis and AF. Dislodgment of clots from the left atrium results in systemic emboli, most com-monly to the cerebral circulation. Patients also have an increased incidence of pulmonary emboli, pulmo-nary infarction, hemoptysis, and recurrent bronchi-tis. Hemoptysis most commonly results from rupture of pulmonary–bronchial venous communications. Chest pain occurs in 10% to 15% of patients with mitral stenosis, even in the absence of CAD; its etiol-ogy often remains unexplained, but may be emboli in the coronary circulation or acute right ventricu-lar pressure overload. Patients may develop hoarse-ness as a result of compression of the left recurrent laryngeal nerve by the enlarged left atrium.

Left ventricular function is normal in the majority of patients with pure mitral stenosis (Figure 21–8), but impaired left ventricular func-tion may be encountered in up to 25% of patients and presumably represents residual damage from rheumatic myocarditis or coexistent hypertensive or ischemic heart disease.

The left ventricle is chronically underloaded in the patient with mitral stenosis. At the same time, the left atrium, right ventricle, and right atrium are frequently dilated and dysfunctional. Vasodilatation that occurs following both neuraxial and general 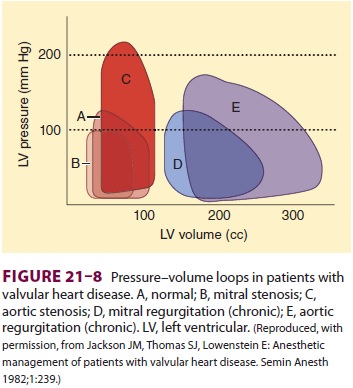 anesthesia can lead to peripheral venous blood pool-ing and inadequate volume delivery to the left ventricle. This can precipitate hemodynamic collapse.

Two-dimensional and Doppler echocardiography can be used to estimate both the pressure drop across a stenotic valve and the valve area. Based on the assumption that the velocity of blood flow is much greater distal than proximal to an obstruction, the Bernoulli equation can be simplified:

where ∆P is the pressure gradient (mm Hg) and V is blood flow velocity (m/s) distal to the obstruc-tion. Valve orifice can be estimated from the time it takes for the initial peak pressure gradient to fall to one-half of its original value, the pressure half-time (T1/2). This relationship is approximated by

where A is valve orifice (cm2) and T1/2 is the time from peak flow velocity (Vmax) to Vmax /1.4. This relationshipis based on the observation that T1/2 remains rela-tively constant for a given orifice over a wide range of flows. A pressure half-time of 220 msec corre-sponds to a mitral valve area of 1 cm 2.

Mitral valve areas less than 1 cm 2 are typically associated with transvalvular gradients of 20 mm Hg at rest and dyspnea with minimal exertion; a mitral valve area less than 1 cm 2 is often referred to as critical mitral stenosis. Patients with valve areas between 1.5 and 2.0 cm2 are generally asymptomatic or have only mild symptoms with exertion. When the mitral valve area is between 1 and 1.5 cm 2, most patients are symptomatic with mild to moderate exertion. Although cardiac output may be normal at rest, it fails to increase appropriately during exertion because of decreased left ventricular preload.

The time from onset of symptoms to incapacitation averages 5–10 years. At that stage, most patients die within 2–5 years. Surgical correction is there-fore usually undertaken once significant symptoms develop. Percutaneous transseptal balloon valvulo-plasty may be used in selected young or pregnant patients, as well as older patients who are poor sur-gical candidates. Medical management is primarily supportive and includes limitation of physical activ-ity, sodium restriction, and diuretics. Small doses of a β-adrenergic blocking drug may also be useful in controlling heart rate in patients with mild to mod-erate symptoms. Patients with a history of emboli and those at high risk (age older than 40 years; a large atrium with chronic atrial fibrillation) are usu-ally anticoagulated.

The principal hemodynamic goals are to main-tain a sinus rhythm (if present preoperatively)and to avoid tachycardia, large increases in cardiac output, and both hypovolemia and fluid overload by judicious administration of intravenous fluids.

Invasive hemodynamic monitoring is often used for major surgical procedures, particularly those associ-ated with large fluid shifts. TEE can also be used to help guide perioperative management. Overzealous fluid replacement readily precipitates pulmonary edema in patients with severe disease. Pulmonary cap-illary wedge pressure measurements in the presence of mitral stenosis reflect the transvalvular gradient and not necessarily left ventricular end-diastolic pressure. Prominent a waves and a decreased y descent are typi-cally present on the pulmonary capillary wedge pres-sure waveform in patients who are in sinus rhythm. A prominent cv wave on the central venous pressure waveform is usually indicative of secondary tricuspid regurgitation. The ECG typically shows a notched P wave in patients who are in sinus rhythm.

Patients may be very sensitive to the vasodilating effects of spinal and epidural anesthesia. Epidural anesthesia may be easier to manage than spinal anesthesia because of the more gradual onset of sym-pathetic blockade. There is no “ideal” general anes-thetic, and agents should be employed to achieve the desired effects of permitting sufficient diastolic time to adequately load the left ventricle. Vasopressors are often needed to maintain vascular tone following anesthetic induction.

Intraoperative tachycardia may be controlled by deepening anesthesia with an opioid (excluding meperidine) or β-blocker (esmolol or metoprolol). In the presence of atrial fibrillation, ventricular rate should be controlled. Marked hemodynamic dete-rioration from sudden SVT necessitates cardiover-sion. Phenylephrine is preferred over ephedrine as avasopressor because the former lacks β-adrenergic agonist activity. Vasopressin can also be employed to restore vascular tone should hypotension develop secondary to anesthetic induction.