Myocardial ischemia is characterized by a meta-bolic oxygen demand that exceeds the oxygen sup-ply. Ischemia can therefore result from a marked increase in myocardial metabolic demand, a reduc-tion in myocardial oxygen delivery, or a combina-tion of both. Common causes include coronary arterial vasospasm or thrombosis; severe hyperten-sion or tachycardia (particularly in the presence of ventricular hypertrophy); severe hypotension, hypoxemia, or anemia; and severe aortic stenosis or regurgitation.

By far, the most common cause of myocardial ischemia is atherosclerosis of the coronary arteries. CAD is responsible for about 25% of all deaths in Western societies and is a major cause of periop-erative morbidity and mortality. The overall inci-dence of CAD in surgical patients is estimated to be between 5% and 10%. Major risk factors for CAD include hyperlipidemia, hypertension, diabetes, cigarette smoking, increasing age, male sex, and a positive family history. Other risk factors includeobesity, a history of cerebrovascular or peripheral vascular disease, menopause, use of high-estrogen oral contraceptives (in women who smoke), and a sedentary lifestyle.

Unstable angina is defined as (1) an abrupt increase in severity, frequency (more than three episodes per day), or duration of anginal attacks (crescendo angina): (2) angina at rest; or (3) new onset of angina (within the past 2 months) with severe or frequent episodes (more than three per day). Unstable angina may occur following MI or be precipitated by non-cardiac medical conditions (including severe ane-mia, fever, infections, thyrotoxicosis, hypoxemia, and emotional distress) in previously stable patients.

Unstable angina, particularly when it is asso-ciated with significant ST-segment changes at rest, usually reflects severe underlying coronary disease and frequently precedes MI. Plaque disruption with platelet aggregates or thrombi and vasospasm are fre-quent pathological correlates. Critical stenosis in one or more major coronary arteries is present in more than 80% of patients with these symptoms. Patients with unstable angina require evaluation and treat-ment, which may include admission to a coronary care unit and some form of coronary intervention.

Anginal chest pains are most often substernal, exer-tional, radiating to the neck or arm, and relieved by rest or nitroglycerin. Variations are common, including epigastric, back, or neck pain, or transient shortness of breath from ventricular dysfunction (anginal equivalent). Nonexertional ischemia and silent (asymptomatic) ischemia are recognized as fairly common occurrences. Patients with diabetes have an increased incidence of silent ischemia.

Symptoms are generally absent until the ath-erosclerotic lesions cause 50% to 75% occlusion of the coronary circulation. When a stenotic segment reaches 70% occlusion, maximum compensatory dilatation is usually present distally: blood flow is generally adequate at rest, but becomes inadequate with increased metabolic demand. An extensive col-lateral blood supply allows some patients to remain relatively asymptomatic in spite of severe disease. Coronary vasospasm is also a cause of transient transmural ischemia in some patients; 90% of vaso-spastic episodes occur at preexisting stenotic lesions in epicardial vessels and are often precipitated by a variety of factors, including emotional upset and hyperventilation (Prinzmetal’s angina). Coronary spasm is most often observed in patients who have angina with varying levels of activity or emotional stress (variable-threshold); it is least common with classic exertional (fixed-threshold) angina.

The overall prognosis of patients with CAD is related to both the number and severity of coronary obstructions, as well as to the extent of ventricular dysfunction.

The general approach in treating patients with isch-emic heart disease is five-fold:

·        Correction of risk factors, with the hope of slowing disease progression.

·        Modification of the patient’s lifestyle to reduce stress and improve exercise tolerance.

·        Correction of coronary lesions by percutaneous coronary intervention (angioplasty [with or without stenting] or atherectomy) or coronary artery bypass surgery.

The last three approaches are of direct relevance to anesthesiologists. The same principles should be applied in the care of these patients in both the oper-ating room and the intensive care unit.

The most commonly used pharmacological agents are nitrates, β-blockers, and calcium channel blockers. These drugs also have potent circulatory effects, which are compared in Table 21–8. Any of these agents can be used for mild angina. Calcium channel blockers are the drugs of choice for patients with predominantly vasospastic angina. β-Blockers improve the long-term outcome of patients with CAD. Nitrates are good agents for both types of angina.

Perhaps equally important, nitrates dilate the coronary arteries. Even minor degrees of dilatation at stenotic sites may be sufficient to increase blood flow, because flow is directly related to the fourth power of the radius. Nitrate-induced coronary vaso-dilatation preferentially increases subendocardial blood flow in ischemic areas. This favorable redistri-bution of coronary blood flow to ischemic areas maybe dependent on the presence of collaterals in the coronary circulation.Nitrates can be used for both the treatment of acute ischemia and prophylaxis against frequent anginal episodes. Unlike β-blockers and calcium channel blockers, nitrates do not have a negative inotropic effect—a desirable feature in the presence of ventricular dysfunction. Intravenous nitroglyc-erin can also be used for controlled hypotensive anesthesia.

Nifedipine’s potent eff ects on the systemic blood pressure may precipitate hypotension, reflex tachycardia, or both; its fast-onset preparations (eg, sublingual) have been associated with MI in some patients. Its tendency to decrease afterload generally offsets any negative inotropic effect. The slow-release form of nifedipine is associated with much less reflex tachycardia and is more suitable than other agents for patients with ventricular 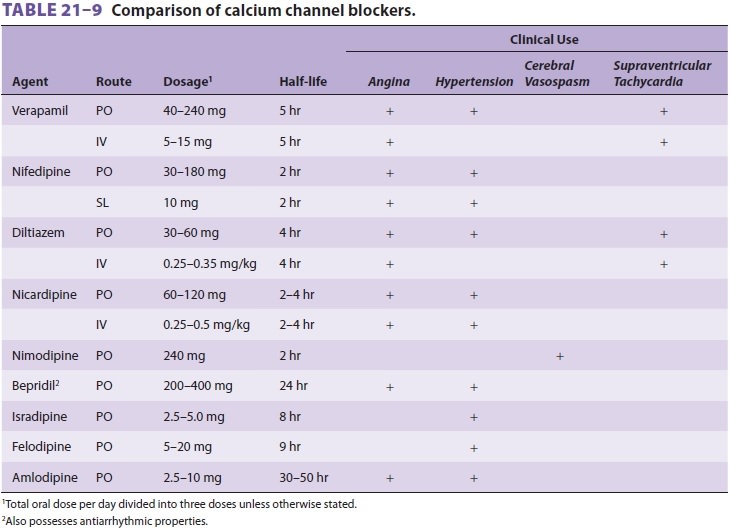 dysfunction. In contrast, verapamil and diltiazem have greater effects on cardiac contractility and atrioventricular (AV) conduction and therefore should be used cautiously, if at all, in patients with ventricular dysfunction, conduction abnormalities, or bradyarrhythmias. Diltiazem seems to be better tolerated than verapamil in patients with impaired ventricular function. Nicardipine, nimodipine, and clevidipine generally have the same effects as nife-dipine; nimodipine is primarily used in preventing cerebral vasospasm following subarachnoid hemor-rhage, whereas nicardipine is used as an intravenous arterial vasodilator. Clevidipine is an ultrashort–act-ing arterial vasodilator.

Calcium channel blockers can have significant interactions with anesthetic agents. All calcium channel blockers potentiate both depolarizing and nondepolarizing neuromuscular blocking agents and the circulatory effects of volatile agents. Both verapamil and diltiazem can potentiate depression of cardiac contractility and conduction in the AV node by volatile anesthetics. Nifedipine and simi-lar agents can potentiate systemic vasodilatation by volatile and intravenous agents. 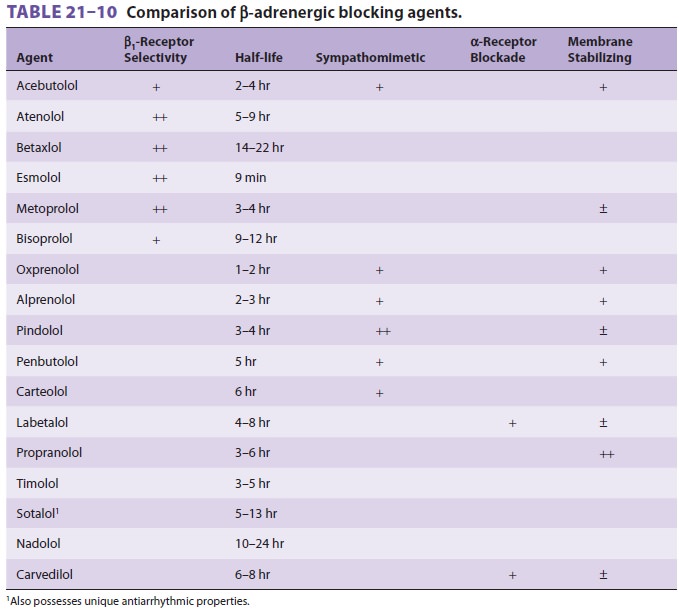 intrinsic sympathomimetic properties are better tol-erated by patients with mild to moderate ventricu-lar dysfunction. Certain β-blockers (carvedilol and extended-duration metoprolol) improve survival in patients with chronic heart failure. This has not been shown to be a drug class effect. Blockade of β2-adrenergic receptors also can mask hypoglyce-mic symptoms in patients with diabetes, delay meta-bolic recovery from hypoglycemia, and impair the handling of large potassium loads. Cardioselective (β1-receptor-specific) agents, although generally better tolerated than nonselective agents in patients with reactive airways, must still be used cautiously in such patients. The selectivity of cardioselective agents tends to be dose dependent. Patients on long-standing β-blocker therapy should have these agents continued perioperatively. Acute β-blocker withdrawal in the perioperative period places patients at a markedly increased risk of cardiac mor-bidity and mortality.

Documentation of avoidance of β-blocker withdrawal is a frequent tool by which “quality” of anesthesia services can be assessed by regulatory agencies.