A recurring question in anesthetic practice is the degree of preoperative hypertension that is accept-able for patients scheduled for elective surgery.

A recurring question in anesthetic practice is the degree of preoperative hypertension that is accept-able for patients scheduled for elective surgery. Except for optimally controlled patients, most hyper-tensive patients present to the operating room with some degree of hypertension. Although data suggest that even moderate preoperative hypertension (dia-stolic pressure <90–110 mm Hg) is not clearly statis-tically associated with postoperative complications, other data indicate that the untreated or poorly con-trolled hypertensive patient is more apt to experi-ence intraoperative episodes of myocardial ischemia, arrhythmias, or both hypertension and hypotension. Intraoperative adjustments in anesthetic depth and use of vasoactive drugs should reduce the incidence of postoperative complications referable to poor preoperative control of hypertension.

Although patients should ideally undergo elective surgery only when rendered normoten-sive, this is not always feasible or necessarily desir-able because of altered cerebral autoregulation. Excessive reductions in blood pressure can com-promise cerebral perfusion. Moreover, the deci-sion to delay or to proceed with surgery should be individualized, based on the severity of the preop-erative blood pressure elevation; the likelihood of coexisting myocardial ischemia, ventricular dys-function, or cerebrovascular or renal complica-tions; and the surgical procedure (whether major surgically induced changes in cardiac preload or afterload are anticipated). With rare exceptions, antihypertensive drug therapy should be con-tinued up to the time of surgery. Some clinicians withhold ACE inhibitors and ARBs on the morn-ing of surgery because of their association with an increased incidence of intraoperative hypoten-sion; however, withholding these agents increases the risk of marked perioperative hypertension and the need for parenteral antihypertensive agents. It also requires the surgical team to remember torestart the medication after surgery. The decision to delay elective surgical procedures in patients with sustained preoperative diastolic blood pressures higher than 110 mm Hg should be made when the perceived benefits of delayed surgery exceed the risks. Unfortunately, there are few appropriate studies to guide the decision-making.

The preoperative history should inquire into the severity and duration of the hypertension, the 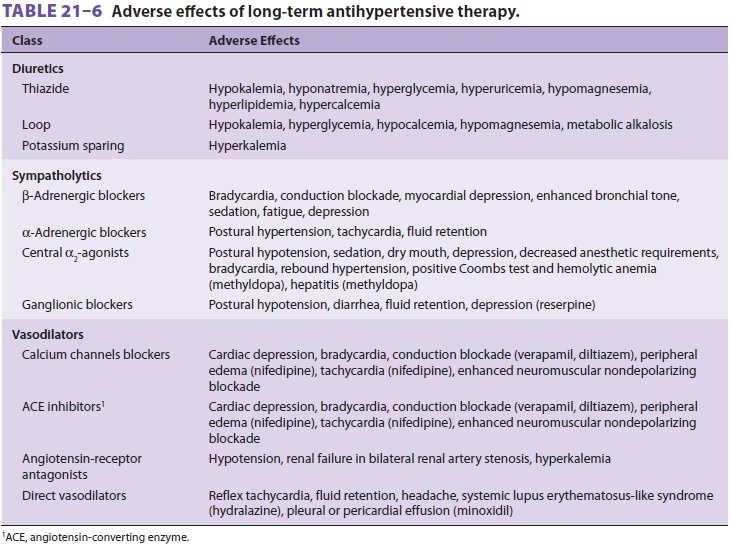 drug therapy currently prescribed, and the pres-ence or absence of hypertensive complications. Symptoms of myocardial ischemia, ventricular failure, impaired cerebral perfusion, or peripheral vascular disease should be elicited, as well as the patient’s record of compliance with the drug regi-men. The patient should be questioned regarding chest pain, exercise tolerance, shortness of breath (particularly at night), dependent edema, postural lightheadedness, syncope, episodic visual dis-turbances or episodic neurologic symptoms, and claudication. Adverse effects of current antihyper-tensive drug therapy (Table 21–6) should also be identified.

Ophthalmoscopy is useful in hypertensive patients. Visible changes in the retinal vasculature usually parallel the severity and progression of arterioscle-rosis and hypertensive damage in other organs. An S4 cardiac gallop is common in patients with LVH. Other physical findings, such as pulmonary rales and an S 3 cardiac gallop, are late findings and indi-cate congestive heart failure. Blood pressure can be measured in both the supine and standing positions. Orthostatic changes can be due to volume deple-tion, excessive vasodilatation, or sympatholytic drug therapy; preoperative fluid administration can pre-vent severe hypotension after induction of anesthe-sia in these patients. Although asymptomatic carotid bruits are usually hemodynamically insignificant, they may be reflective of atherosclerotic vascular disease that may affect the coronary circulation. When a bruit is detected, further workup should be guided by the urgency of the scheduled surgery and the likelihood that further investigations, if diag-nostic, would result in a change in therapy. Doppler studies of the carotid arteries can be used to define the extent of carotid disease.

The ECG is often normal, but in patients with a long history of hypertension, it may show evi-dence of ischemia, conduction abnormalities, an old infarction, or LVH or strain. A normal ECG does not exclude CAD or LVH. Similarly, a normal heart size on a chest radiograph does not exclude ventricular hypertrophy. Echocardiography is a sensitive test of LVH and can be used to evaluate ventricular systolic and diastolic functions in patients with symptoms of heart failure. Chest radiographs are rarely useful in an asymptomatic patient, but may show a boot-shaped heart (suggestive of LVH), frank cardiomeg-aly, or pulmonary vascular congestion.

Renal function is best evaluated by measure-ment of serum creatinine and blood urea nitro-gen levels. Serum electrolyte levels (K) should be determined in patients taking diuretics or digoxin or those with renal impairment. Mild to moder-ate hypokalemia (3–3.5 mEq/L) is often seen in patients taking diuretics, but does not have adverse outcome effects. Potassium replacement should be undertaken only in patients who are symptomatic or who are also taking digoxin. Hypomagnesemia is often present and may be a cause of perioperative arrhythmias. Hyperkalemia may be encountered in patients who are taking potassium-sparing diuretics or ACE inhibitors, particularly those with impaired renal function.

Premedication reduces preoperative anxiety and is desirable in hypertensive patients. Mild to moderate preoperative hypertension often resolves following administration of an agent such as midazolam.