Patients with hypertension frequently present for elective surgical procedures. Some will have been effectively managed, but unfortunately, many others will not have been.

Patients with hypertension frequently present for elective surgical procedures. Some will have been effectively managed, but unfortunately, many others will not have been. Hypertension is a leading cause of death and disability in most Western societies and the most prevalent preoperative medical abnormal-ity in surgical patients, with an overall prevalence of 20% to 25%. Long-standing uncontrolled hyper-tension accelerates atherosclerosis and hypertensive organ damage. Hypertension is a major risk factor for cardiac, cerebral, renal, and vascular disease.

Complications of hypertension include MI, con-gestive heart failure, stroke, renal failure, periph-eral occlusive disease, and aortic dissection. The presence of left ventricular hypertrophy (LVH) in hypertensive patients may be an important predic-tor of cardiac mortality. However, systolic blood pressures below 180 mm Hg, and diastolic pressures below 110 mm Hg, have not been associated with increased perioperative risks. When patients present with systolic blood pressures greater than 180 mm Hg and diastolic pressures greater than 110 mm Hg, anesthesiologists face the dilemma of delaying sur-gery to allow optimization of oral antihypertensive therapy, but adding the risk of a surgical delay versus proceeding with surgery and achieving blood pres-sure control with rapidly acting intravenous agents. Intravenous β-blockers can be useful to treat preop-erative hypertension. Of note, patients with preop-erative hypertension are more likely than others to develop intraoperative hypotension. This is particu-larly frequent in patients treated with angiotensin receptor blockers and/or angiotensin-converting enzyme (ACE) inhibitors. 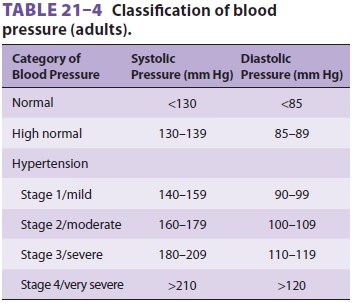 Hypertension can be either idiopathic (essential), or, less commonly, secondary to other medical con-ditions such as renal disease, renal artery stenosis, primary hyperaldosteronism, Cushing’s disease, acromegaly, pheochromocytoma, pregnancy, or estrogen therapy. Essential hypertension accountsfor 80% to 95% of cases and may be associated with an abnormal baseline elevation of cardiac output, systemic vascular resistance (SVR), or both. An evolving pattern is commonly seen over the course of the disease, where cardiac output returns to (or remains) normal, but SVR becomes abnormally high. The chronic increase in cardiac afterload results in concentric LVH and altered diastolic function. Hypertension also alters cerebral autoregulation, such that normal cerebral blood flow is maintained in the face of high blood pressures; autoregulation limits may be in the range of mean blood pressures of 110–180 mm Hg.

Some patients with mild hypertension require only single-drug therapy, which may consist of a thi-azide diuretic, ACE inhibitor, angiotensin-receptor blocker (ARB), β-adrenergic blocker, or calcium channel blocker, although guidelines and outcome studies favor the first three options. Concomitant illnesses should guide drug selection. All patients with a prior MI should receive a β-adrenergic blocker and an ACE inhibitor (or ARB) to improve outcomes, irrespective of the presence of hyperten-sion. In many patients, the “guideline specified” agents will also be more than sufficient to control hypertension.

Patients with moderate to severe hyperten-sion often require two or three drugs for control. The combination of a diuretic with a β-adrenergic blocker and an ACE inhibitor is often effective when single-drug therapy is not. As previously noted, ACE inhibitors (or ARBs) prolong survival in patients with congestive heart failure, left ventricular dys-function, or a prior MI. Familiarity with the names, mechanisms of action, and side effects of commonly used antihypertensive agents is important for anes-thesiologists (Table 21–5). 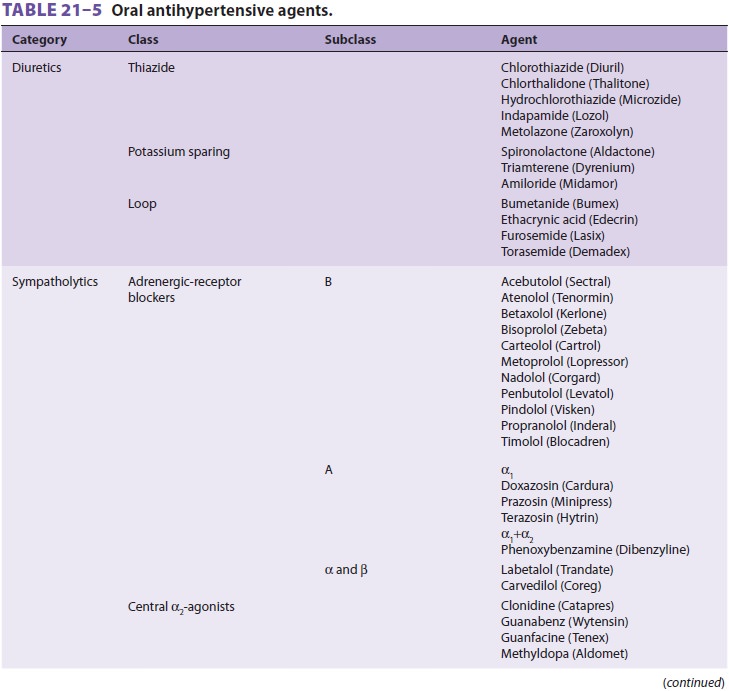 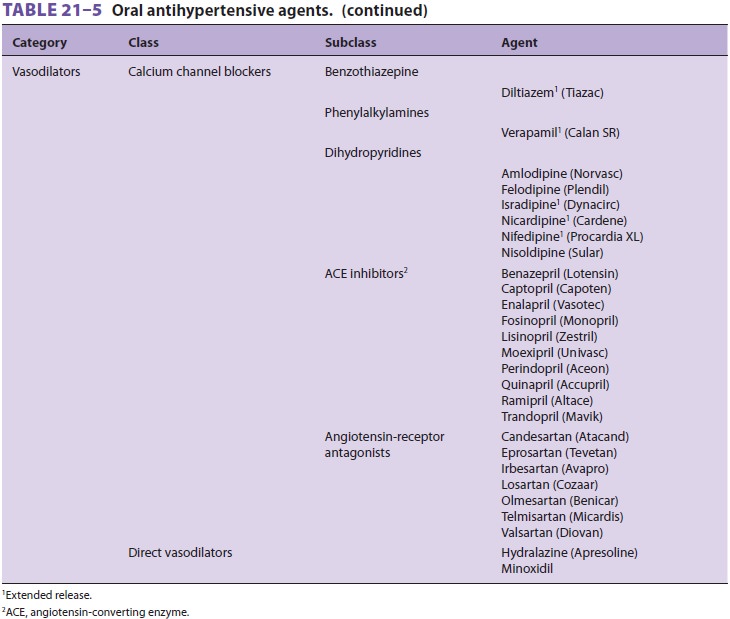