The drinking water of most communities and municipalities is obtained from surface sources - rivers, streams and lakes.

The drinking water of most communities and municipalities is obtained from surface sources - rivers, streams and lakes. Such natu-ral water supplies are likely to be polluted with domestic and industrial water. Many city dwellers (whose water comes from the rivers) are not aware that a considerable portion of their drinking water may have been used earlier for domestic and industrial purposes. Water is used for bathing, washing clothes, washing utensils and flushing toi-lets. The domestic water consumption may vary with the availability of water. Most of the water taken into the houses may be returned as waste water through drainage system. All these waste waters contain organic and inorganic waste as suspended or dissolved matter. In ad-dition, these waste waters contain microorganisms, including those of faecal origin and pathogenic nature. As a potential of pathogenic or-ganisms, water can be in danger to health and life. The pathogens most frequently transmitted through water are those which cause infections of the intestinal tract, namely, typhoid and paraty phoid bacteria, dysentery (Bacillary) and cholera bacteria and viruses. The causative organisms of these diseases are present in the feces or urine of an infected person.

Distribution of microorganisms in aquatic environment

Microorganisms occur in all depths. The surface film and bot-tom sediments have a high concentration of microorganisms. Drifting microbial life of aquatic environment is called Plankton. It is com-posed of Phytoplankton eg. Algae and Zooplankton. The bottom region of the body of water harbours largest number and kinds of mi-croorganisms called benthic microorganisms.

The movement of water by wind, tide and currents affect the distribution of microorganisms up welling occurs in oceans. It is a process in which the bottom water carries with it a rich supply of nutri-ents and delivers it to the surface region.

Aquatic microorganisms in ponds and lakes

The zonation and stratification of lakes and ponds influence the occurrence of microorganisms. Lakes and ponds of temperate region show thermal stratification, which influences the microbial population in different seasons. In spring and autumn mixing occurs resulting in mas-sive growth of algae called bloom. Lakes and ponds enriched with nutrients show eutrophication. The common microorganisms found in fresh water are Pseudomonas, Flavobacterium, Aeromonas and Alcaligenes. Estuary is semi-enclosed coastal water body having con-nection with the open sea. It receives fresh water with all particulate suspensions through rivers. In areas receiving domestic wastes with organic nutrients contain the following organisms: Coliforms, FaecalStreptococci, Bacillus, Clostridium, Thiothrix and Thiobacillus. Soilbacteria such as Azotobacter, Nitrosomonas and Nitrobacter are also foundganismsin fromwater.theVeryclassesfw fungal or Ascomycetes Phycomycetes and Fungi-imperfecti are also present inwater.

Aquatic microorganisms in the sea

The sea is the largest natural environment inhabited by microbes. Bacteria, algae, protozoa, molds and yeast are major groups of micro-organisms found in the sea. The number of microorganisms is more in coastal waters and it gradually decreases in the open sea.

In sea, phytoplanktons form group of microorganisms which convert radiant energy into chemical energy and which support the en-tire population of fishes eg. Diatoms, Cyanobacteria, Dinoflagel-lates, Chrysomonads and Chlamydomonas.

Aquatic microorganisms, both plants and animals, interact among themselves and between microorganisms. Algae, protozoa and other phytoplankton play key role in the food chain in water and certain or-ganisms perform photosynthesis. They are called primary procedures in an aquatic ecosystem. Bacteria and other fungal organisms also play an important role in biogeo chemical transformation in soil.

The only source of potable fresh water nature provides is the rain water. This itself gets polluted by the action of nature, as water falls on land and runs as stream, gathering different types of minerals and suspended particles. In this running water, due to anthropogenic activities, more minerals, more chemicals and organic materials are added, that makes the water polluted. There are three main sources of pollution of waters.

The industrial effluents are classified under the following heads.

Water free from disease causing organisms and free from harm-ful chemicals is known as Potable water. Water contaminated with sewage, domestic or industrial waste with chemicals and pathogenic microorganisms is termed as contaminated water or polluted water.

The characteristics of water from various sources depend on rain, nature of substratum on which it is in contact and the effect of other substances added to it. The chemical analysis of water is neces-sary to ascertain the quality of water. For human consumption, potable water should be used. Any water can be called as potable water, it if is free from undesirable odour, flavour and contains no bacteria capable of producing diseases in man. 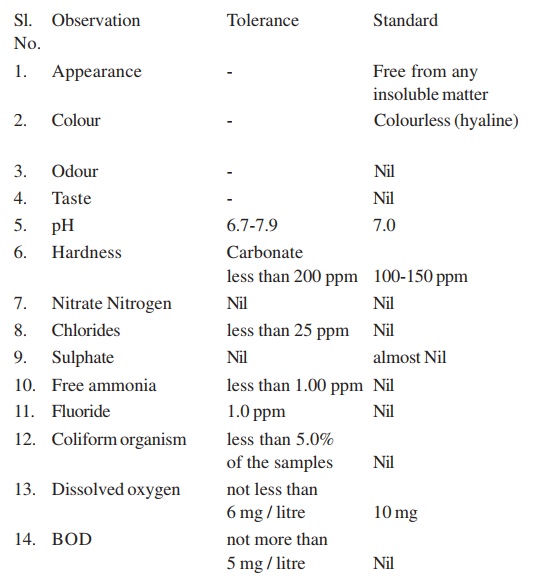 It is almost impossible to isolate from water the organisms re-sponsible for water-borne diseases. Few organisms are present and they do not multiply in water. The only safe method to prevent water-borne disease is to condemn fecally polluted water as being unfit for human use, as it may contain harmful organisms. Fecal pollution can be determined by examination of water for colon bacilli (E.coli).E.coli is abundant in feces and not found outside intestinal tract in nature. The E.coli in water indicates the presence of pathogenic microorganisms inwater, which may be responsible for a number of water-borne dis-eases. Hence, E.coli is known as indicator organism. Water also con-tains bacteria that resemblebutmayE.colir may not be of fecalorigin. These bacteria also ferment lactose with formation of gas like E.coli. The other indicator organisms are Streptococcus faecalis Strep-tococcus faecium, Streptococcus bovis, Streptococcus equinus etc., and Clostridium perfringenes.