The air in the atmosphere, which is found outside the buildings, is referred to as outside air. The dominant microflora of outside air are fungi. The two common genera of fungi are Sporobolomyces. Besides these two genera, other genera found in airare Aspergillusand,Alternaria, Phytophthora ysipheEr . The out-door air also contains basidispores, ascopores of yeast, fragments of mycelium and conidia of molds.

Among the bacterialClostridiumandgenera Bacillus         , Sarcina, Micrococcus, Corynebacterium and Achromobacter are widely foundin the outside air. The number and kind of microorganisms may vary from place to place, depending upon the human population densities.

The atmosphere consists of a mixture of gases and variable quantities of water and solid particles. According to Landsberg, air has the following composition:

The composition shows slight variations with latitude and to a lesser extent with altitude. The ozone owes its existence in the atmo-sphere to photosynthesis from oxygen under the influence of solar ul-traviolet radiations.

The air should be free from pathogenic microorganisms. As per the definition of the World Health Organization air pollution is a â€śsitua-tion which are harmful to people or their environment. The Central Pollution Board, New Delhi has fixed standard for ambient air quality in India under the Air Act, 1981, beyond which an ambient air can be considered polluted in a legal sense. 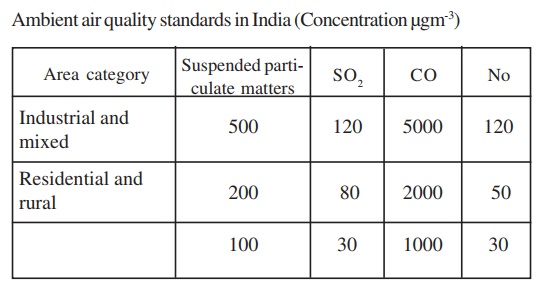 The Air Act prescribes emission standards. Thus the air quality standard is a limit on the amount of a given pollutant permitted in the air around us.

Enumeration and assessment of microorganisms in air

In this method, the air drawn is through a very small openings or a capillary tube bubbled through the liquid. The organisms get trapped in the liquid medium. Aliquots of the liquid are then plated with medium to determine its microbial content. In this method, living cells which are present in air can be enumerated.

In this method, microorganisms are collected or impinged directly on the solid surface of agar medium by gravitational force.

Colonies develop on the surface of the medium after few days of incu-bation. Several devices are used; of which settling plate technique is the simplest. In this method, cover of the petridish containing agar medium is removed, and the agar surface is exposed to the air sample for several minutes. A certain number of colonies develop on incuba-tion of the petridish. Since the technique does not record the actual volume of sampled, it gives only approximate estimate of microorgan-isms. However, it gives information about the kind and number of organisms in a particular area.

The major sources of contamination in the air are, automobile exhausts like incomplete combustion of fuel, agricultural sources like spraying of pesticides and insecticides, hospitals, industries like tan-nery industries, distilleries, nuclear power plants and chemical indus-tries. All these industries provide smoke into the air. The smoke com-prises of dust particles from the combustion of coal and oil. Automo-bile engines driven by petrol, produce many different substances in its exhaust. Some of these substances are serious air pollutants. Air pol-lutants are Co, CO2, unburnt hydrocarbon NO2, SO2 and lead from leaded petrol.