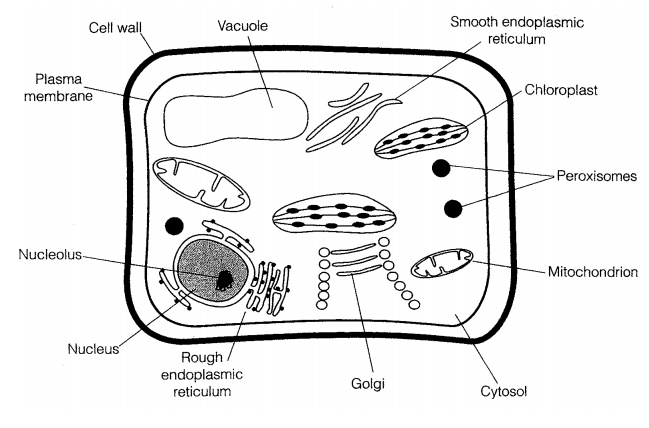 That eucaryotic cells are, for the most part, larger and much more complex than procaryotes, containing a range of specialised subcellular organelles.

That eucaryotic cells are, for the most part, larger and much more complex than procaryotes, containing a range of specialised subcellular organelles (Fig-ure 3.13). Within the microbial world, the major groups of eucaryotes are the fungi and the protists (protozoans and algae); all of these groups have single-celled representatives, and there are multicellular forms in the algae and fungi. 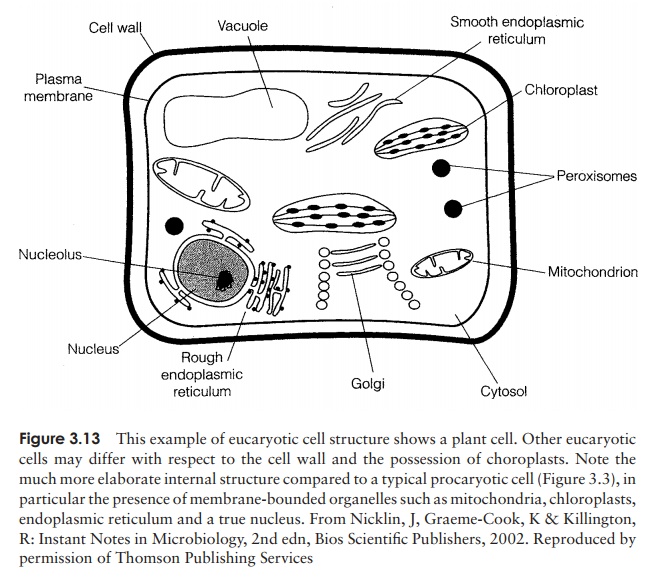 Our survey of eucaryotic cell structure begins once more with the genetic material, and works outwards. However, since many internal structures in eucaryotes are en-closed in a membrane, it is appropriate to preface our description by briefly considering eucaryotic membranes. These are, in fact, very similar to the fluid mosaic structure we described earlier, as depicted in Figure 3.5. The main difference is that eucaryotic membranes contain lipids called sterols, which enhances their rigidity. We shall consider the significance of this when we discuss the plasma membrane of eucary-otes below. Cholesterol, which we usually hear about in a very negative context, is a very important sterol found in the membranes of many eucaryotes. 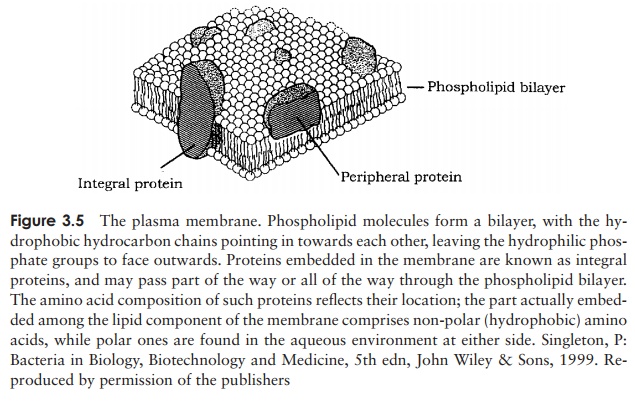 The principal difference between procaryotic and eucaryotic cells, and the one that gives the two forms their names, lies in the accommodation of their genetic material. Eucaryotic cells have a true nucleus, surrounded by a nuclear membrane. This is in fact a double membrane; it contains pores, through which messenger RNA leaves the nucleus on its way to the ribosomes during protein synthesis.

The organisation of genetic material in eucaryotes is very different from that in procaryotes. Instead of ex-isting as a single closed loop, the DNA of eucaryotes is organised into one or more pairs of chromosomes. The fact that they occur in pairs highlights another important difference from procaryotes: eucaryotes are genetically diploid in at least some part of their life cycle, while pro-caryotes are haploid. The DNA of eucaryotic chromo-somes is linear in the sense that it has free ends; however, because there is so much of it, it is highly condensed and wound around proteins called histones. These carry a strong positive charge and associate with the negatively charged phosphate groups on the DNA.

As well as the chromosomes, the nucleus also contains the nucleolus, a discrete structure rich in RNA, where ri-bosomes are assembled. The ribosomes themselves have the same function as their procaryotic counterparts; the differences in size have already been discussed (see Table 3.3). They may be found free in the cytoplasm or associated with the endoplasmic reticulum , depending on the type of protein they synthesise.

Running throughout the cell and taking up much of its volume, the endoplasmic retic-ulum (ER) is a complex membrane system of tubes and flattened sacs. The presence of numerous ribosomes on their surface gives those parts of the ER involved in protein syn-thesis a granular appearance when seen under the electron microscope, giving rise to the name rough ER. Areas of the ER not associated with ribosomes are known as smoothER; this is where the synthesis of membrane lipids takes place. The ER also serves as acommunications network, allowing the transport of materials between different parts of the cell.

Another function of the Golgi apparatus is to package certain hydrolytic (digestive) enzymes into membrane-bound packets called lysosomes. The enzymes are needed to digest nutrient molecules that enter the cell by endocytosis (Figure 3.14), and would break down the fabric of the cell itself if they were not contained within the lyso-somes. Peroxisomes are similar to lysosomes, but smaller, and also contain degradative enzymes. They contain the enzyme catalase, which breaks down the potentially toxic hydrogen peroxide generated by other breakdown reactions within the peroxisome. 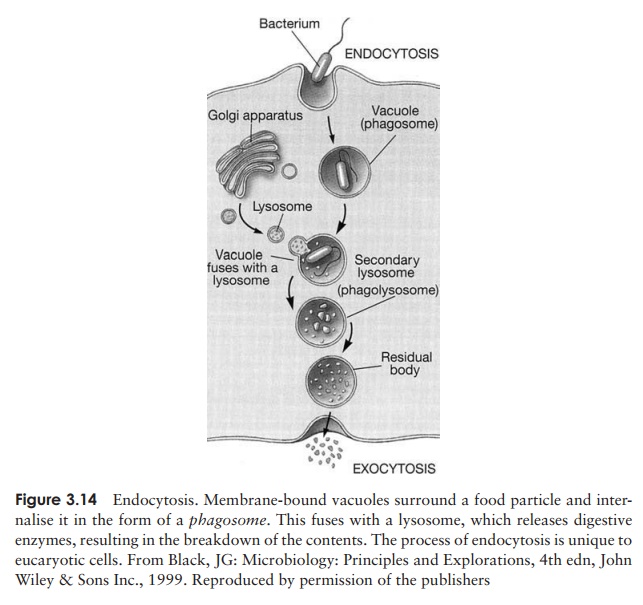 Whereas in procaryotes the enzymes involved in adenosine triphosphate generation  are associated with the plasma membrane, in eucaryotes they are found in specialised organelles called mitochondria. These are generally rod-shaped and may be present in large numbers. They are enclosed by a double membrane, the inner sur-face of which is folded into finger-like projections called cristae. Respiratory enzymes are located on the increased surface area this provides, while other metabolic reactions take place in the semi-fluid matrix (Figure 3.15). 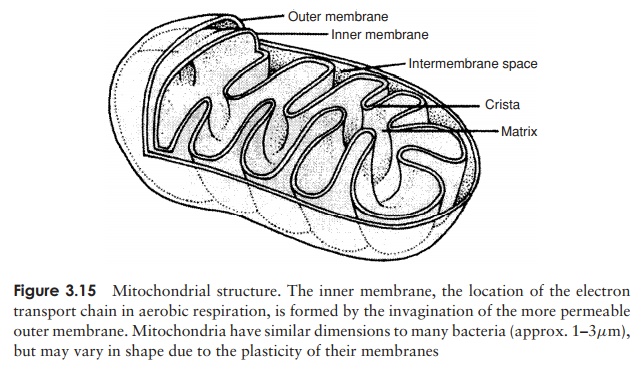 The mitochondrial cristae of algae, fungi and protozoans each have their own char-acteristic shapes. Until very recently, a few primitive protozoans, such as Giardia, ap-peared to lack mitochondria completely, and were thought to represent an intermediate stage in the evolution of the eucaryotic condition. Recent research, however, has shown them to possess highly reduced remnants of mitochondria, which have been given the name mitosomes. It seems that such organisms did, after all, once possess mitochondria, but have subsequently lost much of their function – an example of so-called reductive evolution.

Chloroplasts are specialised organelles involved in the process of photosynthesis, the conversion of light into cellular energy. As such, they are characteristic of green plants and algae. Like mitochondria, chloroplasts are surrounded by a double membrane, and serve as the location for energy-generating reactions. Inside the chloroplast are 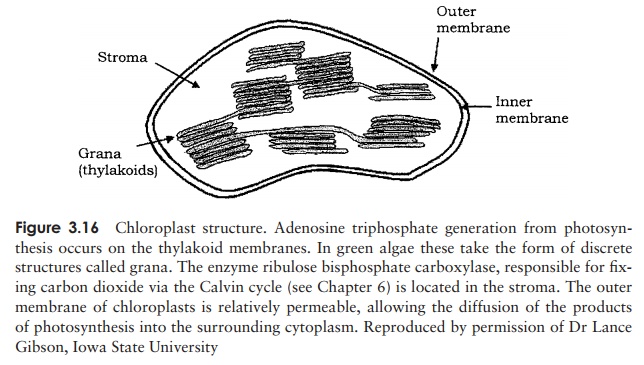 Mitochondria and chloroplasts both contain 70S ribosomes (similar to those found in procaryotes), a limited amount of circular DNA and the means to replicate themselves. This is seen as key evidence for the endosymbiotic theory of eucaryotic evolution, which envisages that specialised organelles within eucaryotic cells arose from the ingestion of small procaryotes, which over a long period of time lost their independent existence.

Vacuoles are membrane-covered spaces within cells, and derive from the Golgi appara-tus. They act as stores for various nutrients, and also for waste products. Some types of vacuole are important in regulating the water content of the cell.

Many eucaryotes do not have cell walls, so the plasma membrane represents the out-ermost layer of the cell. The sterols mentioned earlier are important in helping these cells to resist the effects of osmotic pressure. The only procaryotes to contain sterols are the mycoplasma, which are unusual in not possessing the typical bacterial cell wall. Although the eucaryotic plasma membrane does not have the role in cellular respira-tion associated with its procaryotic counterpart, it does have additional functions. The process of endocytosis (and its reverse, exocytosis), by which particles or large soluble molecules are enveloped and brought into the cell, is carried out at the plasma mem-brane. Also, carbohydrate residues in the membrane act as receptors for cell-to-cell recognition, and may be involved in cell adhesion.

As we have just noted, not all eucaryotes possess a cell wall; among those that do are fungi, algae and plants. Whilst the function, like that of procaryotes, is to give strength to the cell, the chemical composition is very different, generally being a good deal simpler. The cell walls of plants, algae and lower members of the fungi are based on cellulose (Figure 3.17a), a repeating chain of glucose molecules joined by β-1,4 linkages, and may also include pectin and hemicellulose, both also polymers of simple sugars. Most fungi such as yeasts and mushrooms contain chitin, a polymer of N-acetylglucosamine (Figure 3.17b: we have encountered N-acetylglucosamine before, as a component of peptidoglycan in bacterial walls.) Chitin is also to be found as the major component of insect and crustacean exoskeletons, where the function is also to provide strength and rigidity. As in procaryotes, the cell wall plays little part in the exchange of materials between the cell and its environment, a role fulfilled by the plasma membrane. 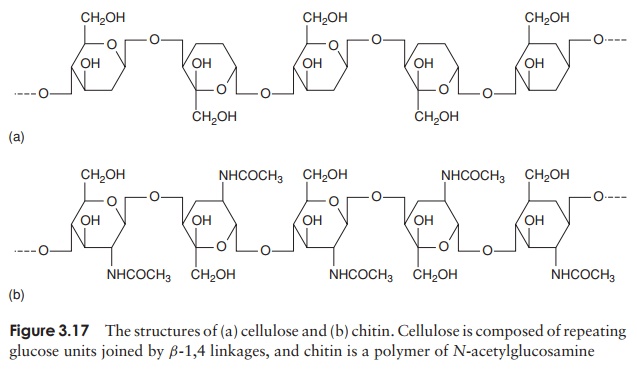 Some protozoans and unicellular algae are surrounded by a flexible pellicle made of protein.

Motility in eucaryotic cells may be achieved by means of flagella or cilia; cilia can be thought of as, essentially, short flagella. Both are enclosed within the plasma membrane and anchored by means of a basal body. Flagellated cells generally have a single flagel-lum, whereas cilia are often present in very large numbers on each cell. In the microbial world, flagella are found in protozoans and motile algal forms, whilst cilia are mostly found in a class of protozoans called the Ciliophora. Flagella and cilia are not found in members of the Fungi. Although they share the same thread-like gross morphology, 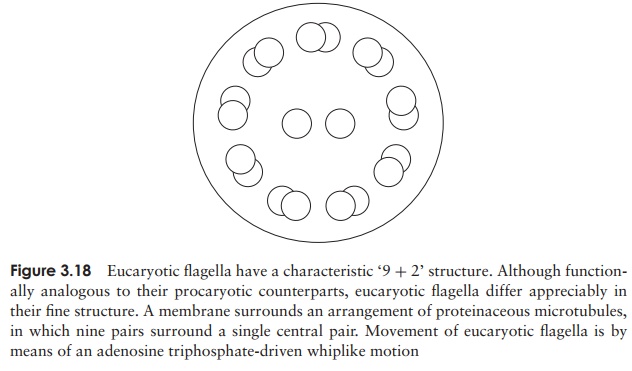 eucaryotic flagella differ dramatically in their ultrastructure from those of procaryotes. Seen in cross-section, they have a very characteristic appearance, made up of two central microtubules, surrounded by a further nine pairs arranged in a circle (Figure 3.18). Themicrotubules are made of a protein called tubulin. Flagella in eucaryotes beat in waves, rather than rotating; cilia, present in large numbers, beat in a coordinated fashion so that some are in forward motion while others are in the recovery stroke (rather like a ‘Mexican wave’!). In animals, ciliary motion has been adapted to move particulate matter across a tissue surface; ciliated cells of the respiratory tract, for example, act as a first line of defence in the removal of inhaled particles, such as bacteria from the airways.