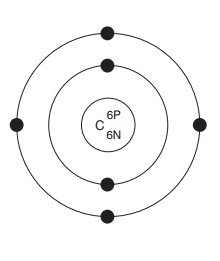 All atoms have a central, positively charged nucleus, which is very dense, and makes up most of the mass of the atom. 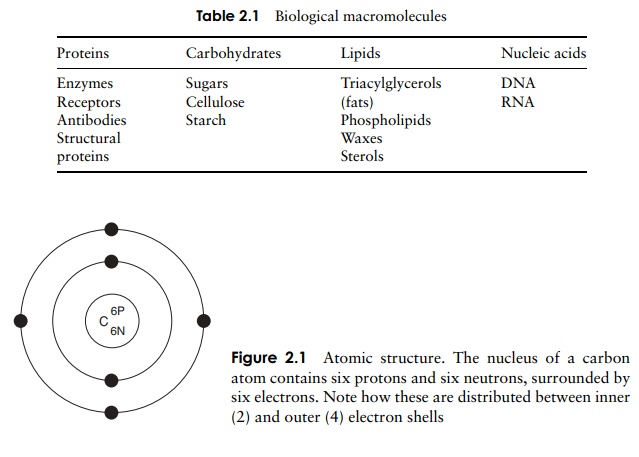 Atoms having the same atomic number have the same chemical properties; such atoms all belong to the same element. An element is made up of one type of atom only and cannot be chemically broken down into simpler substances; thus pure copper for example is made up entirely of copper atoms. There are 92 of these elements occurring naturally, 26 of which commonly occur in living things. Each element has been given a universally agreed symbol; examples which we shall encounter in biological macro-molecules include carbon (C), hydrogen (H) and oxygen (O). The atomic numbers of selected elements are shown in Table 2.2. 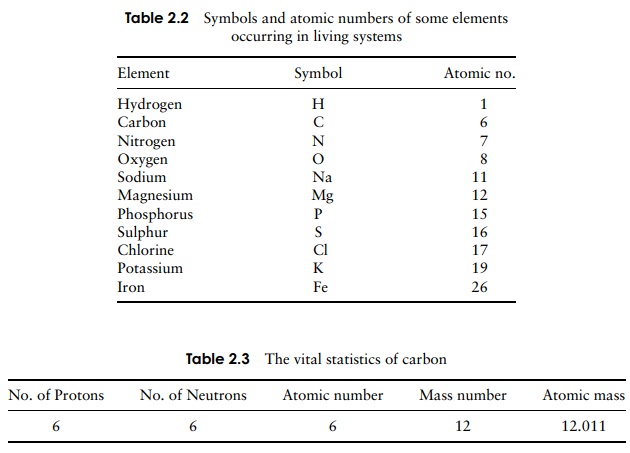 The relationship between neutrons, protons, atomic number, and mass number is illustrated in Table 2.3, using carbon as an example, since all living matter is based upon this element. The carbon represented can be expressed in the form:

The number of neutrons in an atom can be deduced by subtracting the atomic number from the mass number. In the case of carbon, this is the same as the number of protons (6), but this is not always so. Phosphorus for example has 15 protons and 16 neutrons, giving it an atomic number of 15 and a mass number of 31. 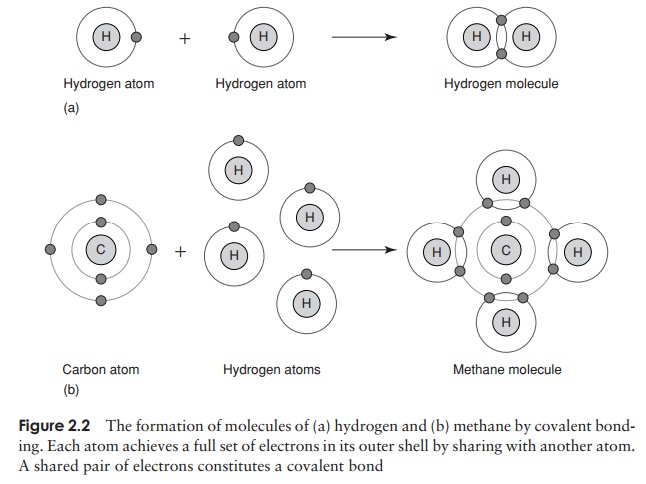 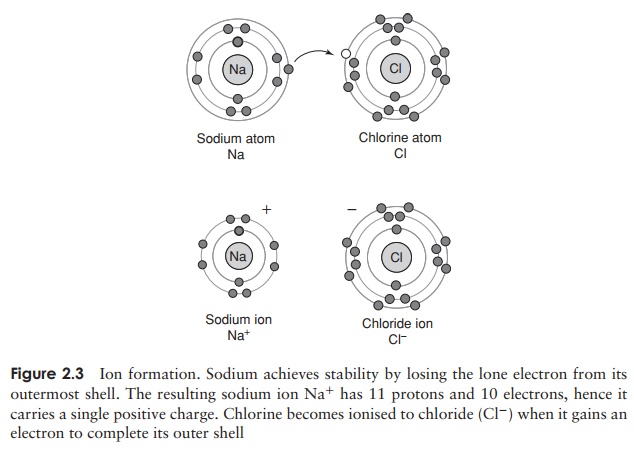 The force that causes two or more atoms to join together is known as a chemical bond, and several types are found in biological systems. The interaction between sodium and chloride ions shown in Figure 2.4 is an example of ionic bonding, where the transfer of an electron from one party to another means that both achieve a complete outer electron shell. There is an attractive force between positively and negatively charged ions, called an ionic bond. Certain elements form ions with more than a single charge, by gaining or losing two or more electrons in order to achieve a full outer electron shell; thus calcium ions (Ca2+ ) are formed by the loss of two electrons from a calcium atom.

The goal of stability through a full complement of outer shell electrons may also be achieved by means of sharing one or more pairs of electrons. Consider the formation of water (Figure 2.2); an oxygen atom, which has two spaces in its outer shell, can achieve a full complement by sharing electrons from two separate hydrogen atoms. This type of bond is a covalent bond.

Sometimes, a pair of atoms share not one but two pairs of electrons (see Figure 2.5). This involves the formation of a double bond. Triple bonding, through the sharing of three pairs of electrons, is also possible, but rare.

In the examples of covalent bonding we’ve looked at so far, the sharing of the electrons has been equal, but this is not always the case because sometimes the electrons may be drawn closer to one atom than another (Figure 2.6a). This has the effect of making one atom slightly negative and another slightly positive. Molecules like this are called polar molecules and the bonds are polar bonds. Sometimes a large molecule may have both polar and non-polar areas.

Polar molecules are attracted to each other, the negative areas of one molecule and the positive areas of another acting as magnets for one another (Figure 2.6b). In water, 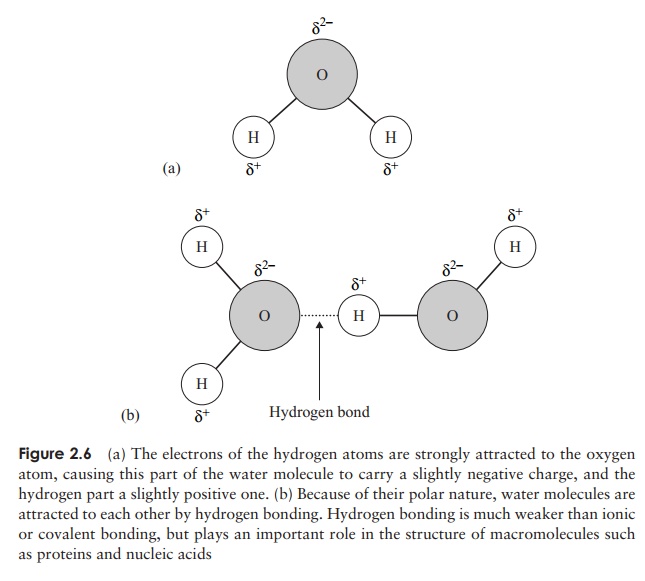 bonds; however, if sufficient of them form in a compound the overall bonding force can be appreciable. Each water molecule can form hydrogen bonds with others of its kind in four places (Figure 2.6b). In order to break all these bonds, a large input of energy is required, explaining why water has such a relatively high boiling point, and why most of the water on the planet is in liquid form.

Another weak form of interaction is brought about by Van der Waals forces, which occur briefly when two non-polar molecules (or parts of molecules) come into very close contact with one another. Although transient, and generally even weaker than hydrogen bonds, they occur in great numbers in certain macromolecules and play an important role in holding proteins together .

Water is essential for living things, both in the composition of their cells and in the environment surrounding them. Organisms are made up of between 60 and 95 per cent water by weight, and even inert, dormant forms like spores and seeds have a significant water component. This dependence on water is a function of its unique properties, which in turn derive from its polar nature.

Water is the medium in which most biochemical reactions take place; it is a highly efficient solvent, indeed more substances will dissolve in water than in any other sol-vent. Substances held together by ionic bonds tend to dissociate into anions and cations in water, because as individual solute molecules become surrounded by molecules of water, hydration shells are formed, in which the negatively charged parts of the solute attract the positive region of the water molecule, and the positive parts the negative region (Figure 2.7). The attractive forces that allow the solute to dissolve are called hy-drophilic forces, and substances which are water-soluble are hydrophilic (water-loving).Other polar substances such as sugars and proteins are also soluble in water by forming hydrophilic interactions.

ions. Water molecules form hydration shells around both Na+ and Cl− ions Molecules such as oils and fats are non-polar, and because of their non-reactivity with water are termed hydrophobic (‘water-fearing’). If such a molecule is mixed with water, it will be excluded, as water molecules ‘stick together’. This very exclusion by water can act as a cohesive force among hydrophobic molecules (or hydrophobic areas of large molecules). This is often called hydrophobic bonding, but is not really bonding as such, rather a shared avoidance of water. All living cells have a hydrophilic interior surrounded by a hydrophobic membrane.

An amphipathic substance is one which is part polar and part non-polar. When such a substance is mixed with water, micelles are formed (Figure 2.8); the non-polar

parts are excluded by the water and group together as described above, leaving the polar groups pointing outwards into the water, where they are attracted by hydrophilic forces. Detergents exert their action by trapping insoluble grease inside the centre of a micelle, while interaction with water allows them to be rinsed away.

Water takes part in many essential metabolic reactions, and its polar nature allows for the breakdown to hydrogen and hydroxyl ions (H+ and OH− ), and re-synthesis as water. Water acts as a reactant in hydrolysis reactions such as:

and as a product in certain synthetic reactions, such as: