Carbohydrates are made up of just three different ele-ments, carbon, hydrogen and oxygen.

have the general formula (CH2O)n. They are classed as either aldoses or ketoses, ac-cording to whether they contain an aldehyde group or a ketone group (Figure 2.10). Monosaccharides can further be classified on the basis of the number of carbon atoms they contain. The simplest are trioses (three carbons) and the most important biologi-cally are hexoses (six carbons).

Monosaccharides are generally crystalline solids which are soluble in water and have a sweet taste. They all reducing sugars, so called because they are able to reduce alkaline solutions of cupric ions (Cu2+ ) to cuprous ions (Cu+ ).

A disaccharide is formed when two monosaccharides (which may be of the same type or different), join together with a concomitant loss of a water molecule (Fig-ure 2.11). Further monosaccharides can be added, giving chains of three, four, five 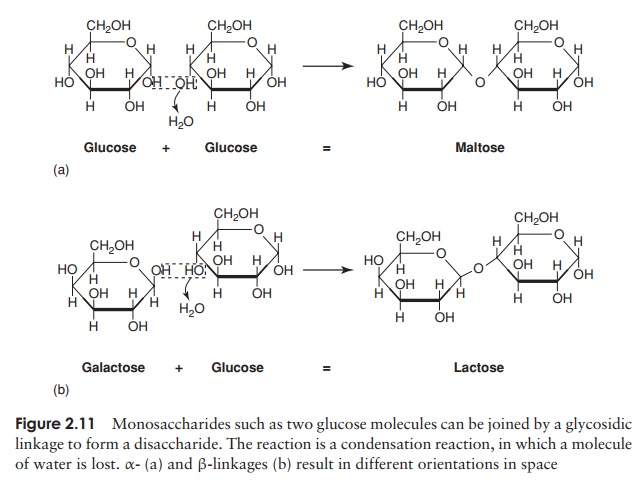 Biologically important molecules such as starch, cellulose and glycogen are all polysaccharides. Another is dextran, a sticky substance produced by some bacteria to aid their adhesion. They differ from monosaccharides in being generally insoluble in water, not tasting sweet and not being able to reduce cupric ions. Most polysaccharides are made up from either pentose or hexose sugars, and, like di- and oligosaccharides, can be broken down into their constituent subunits by hydrolysis reactions.