The third class of polymeric macromolecules are the nucleic acids. These are deoxyri-bonucleic acid (DNA) and ribonucleic acid (RNA), and both are polymers of smaller molecules called nucleotides. As we shall see, there are important differences both in the overall structures of RNA and DNA and in the nucleotides they contain, so we shall consider each of them in turn.

The structure of DNA

The composition of a DNA nucleotide is shown in Figure 2.20(a). It has three parts, a five-carbon sugar called deoxyribose, a phosphate group and a base. This base can be any one of four molecules; as can be seen in Figure 2.21, these are all based on a cyclic structure containing nitrogen. Two of the bases, cytosine and thymine, have a single ring and are called pyrimidines. The other two, guanine and adenine, have a double ring structure; these are the purines. The four bases are often referred to by their initial letter only, thus we have A, C, G and T. 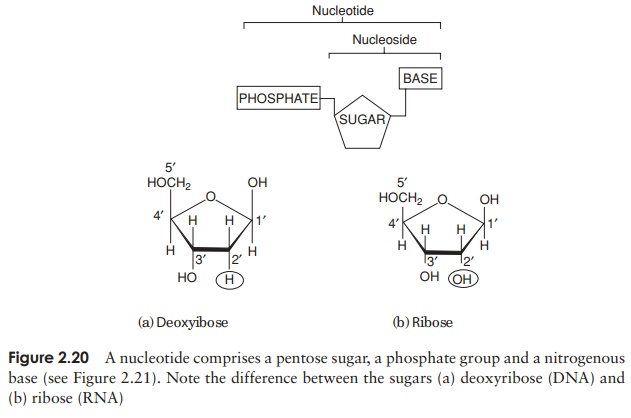 One nucleotide differs from another by the identity of the base it contains; the rest of the molecule (sugar and phosphate) is identical. You will recall from the previous section that the properties of a protein depend on the order in which its constituent amino acids are linked together; we have exactly the same situation with nucleic acids, except that instead of an ‘alphabet’ of 20 ‘letters’, here we have one of only four. Nevertheless, because nucleic acid molecules are extremely long, and the bases can occur in almost any order, an astronomically large number of different sequences is possible. 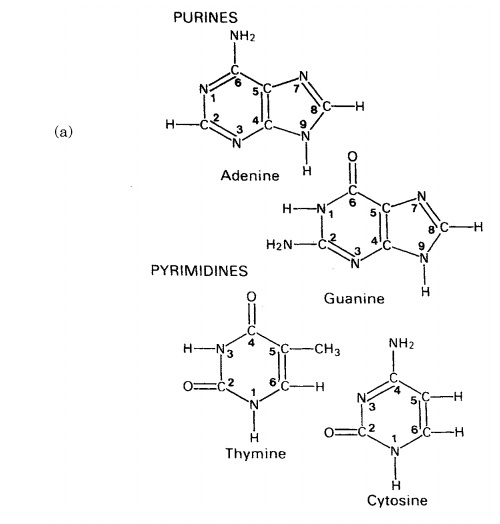 The nucleotides join together by means of a phosphodiester bond. This links the phosphate group of one base to an -OH group on the 3-carbon of the deoxyribose sugar of another (Figure 2.22). The chain of nucleotides therefore has a free -OH group attached to the 3-carbon (the 3 end) and a free phosphate group attached to the 5-carbon (the 5 end). This remains the case however long the chain becomes. 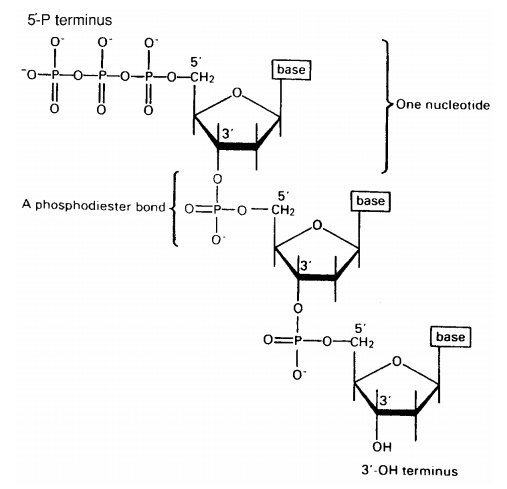 The structure of DNA however is not just a sin-gle chain of linked nucleotides, but two chains wound around each other to give the double helix form made famous by the model of James Watson and Francis Crick in 1953 (Figure 2.23). If we com-pare this to an open spiral staircase, alternate sugar and phosphate groups make up the ‘skeleton’ of the stair-case, while the inward-facing bases pair up by hydro-gen bonding to form the steps. Notice that each nu-cleotide pair always comprises three rings, resulting from a combination of one purine and one pyrimidine base. This means that the two strands of the helix are always evenly spaced. The way in which the bases pair is further governed by the phenomenon of complementary basepairing. A nucleotide containing thymine will only pair with one containing adenine,and likewise guanine always pairs with cytosine (Figure 2.24). Thus, the sequence of 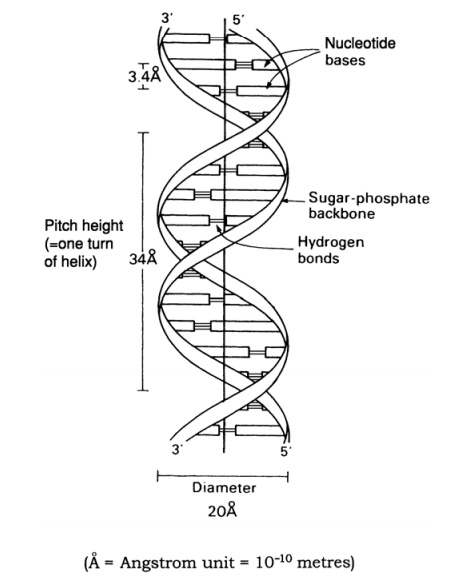 nucleotides on one strand of the double helix determines that of the other, as it has a complementary structure. Figure 2.23 shows how the two strands of the double helix are antiparallel, that is they run in opposite directions, one 5 → 3 and the other 3 →5 . We shall look at how this structure was used to propose a mechanism for the way in which DNA replicates and genetic material is copied.

The structure of RNA

In view of the similarities in the structure of DNA and RNA, we shall confine ourselves here to a consideration of the major differences. There are two important differences in the composition of nucleotides of RNA and DNA. The central sugar molecule is not deoxyribose, but ribose; as shown in Figure 2.20, these differ only in the possession of an -H atom or an -OH group attached to carbon-2. Second, although RNA shares three of DNA’s nitrogenous bases (A, C and G), instead of thymine it has uracil. Like thymine, this pairs specifically with adenine.

The final main difference between RNA and DNA is the fact that RNA generally comprises only a single polynucleotide chain, although this may be subject to secondary and tertiary folding as a result of complementary base pairing within the same strand. The roles of the three different forms of RNA will be discussed.