Critical to the development of microbiology during its ‘golden age’ was the advance in culturing techniques, enabling the isolation and pure culture of specific microorganisms.

Critical to the development of microbiology during its ‘golden age’ was the advance in culturing techniques, enabling the isolation and pure culture of specific microorganisms. The study of pure cultures made it possible to determine the properties of a specific organism such as its metabolic characteristics or its ability to cause a particular disease. It also opened up the possibility of classifying microorganisms, on the basis of the characteristics they display in pure culture.

The artificial culture of any organism requires a supply of the necessary nutrients, together with the provision of appropriate conditions such as temperature, pH and oxygen concentration. The nutrients and conditions provided in the laboratory are usu-ally a reflection of those found in the organism’s natural habitat. It is also essential that appropriate steps are taken to avoid contamination. In the next section we shall describe the techniques used to isolate and propagate microorganisms in the labo-ratory.

Microorganisms in the natural world do not live in pure cultures; they exist as part of complex ecosystems com-prising numerous other organisms. The first step in the cultivation of microorganisms is therefore the creation of a pure culture. A key development for the production of pure cultures was the ability to grow microorganisms on a solid medium. Koch had noticed that when a nutrient surface such as cut potato was exposed to air, individual microbial colonies grew up, and he inferred from this that these had each arisen from the numerous divisions of single cells.

It soon became apparent that a number of organisms would not grow on potatoes, so Koch and his colleagues turned to gelatin as a means of solidifying a synthetic nutrientgrowth medium. Horizontal slabs were cut, and coveredto help keep them free from atmospheric contaminants. Gelatin was a convenient means of solidifying media, as it could be boiled and then allowed to set in the desired vessel. There were two main drawbacks to its use, how-ever; many organisms needed to be incubated at around body temperature (37 ◦ C), and gelatin melted before this temperature was reached. Also, it was found that a num-ber of bacteria were capable of utilising gelatin as a nu-trient source, resulting in the liquefaction of the gel.

A more suitable alternative was soon found in the form of agar. This is a complex polysaccharide derived from seaweeds, and was suggested by the wife of one of Koch’s colleagues, who had used it as a setting agent in jam making. Agar does not melt until near boiling point; this means that cultures can be incubated at 37 ◦ C or above without the medium melting. Moreover, when it cools, agar remains molten until just over 40 ◦ C, allowing heat-sensitive media componentssuch as blood to be added. In addition, most bacteria can tolerate a short exposure to temperatures in this range, so they too can be inoculated into molten agar (see pour plate method below). Crucially, agar is more or less in-ert nutritionally; only a very few organisms are knownthat are able to use agar as a food source; consequently, it is the near ideal setting agent, resisting both thermal and microbial breakdown. Agar soon became the setting agent of choice, and has remained so ever since; shortlyafterwards, Richard Petri developed the two-part culture dish that was named after him, and which could be sterilised separately from the medium and provided protection from contamination by means of its lid,. This again is still standard equipment today, although the original glass has been largely replaced by presterilised, disposable plastic.

The standard method of obtaining a pure bacterial culture is the creation of a streakplate (Figure 4.2). A wire inoculating loop is used to spread out a drop of bacterialsuspension on an agar plate in such a way that it becomes progressively more dilute; 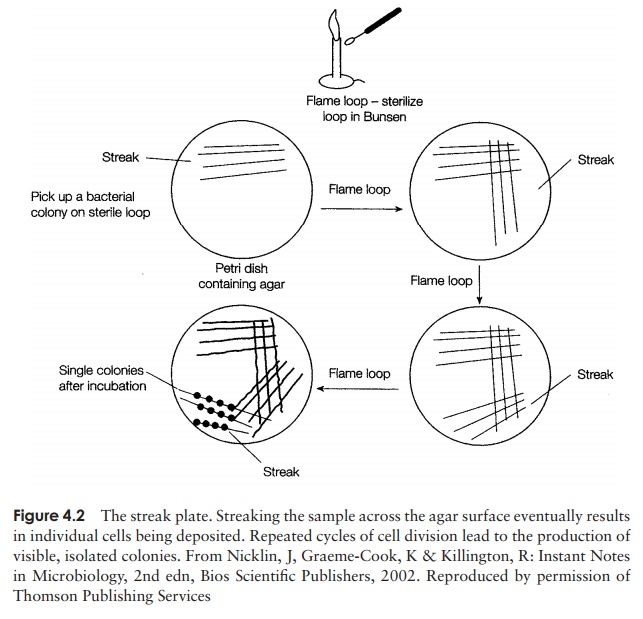 eventually, individual cells will be deposited on the agar surface. Following incubation at an appropriate temperature, a succession of cell divisions occurs, resulting in the for-mation of a bacterial colony, visible to the naked eye. Colonies arise because movement is not possible on the solid surface and all the progeny stay in the same place. A colony represents, in theory at least, the offspring of a single cell and its members are therefore genetically identical. (In reality, a clump of cells may be deposited together and give rise to a colony; this problem can be overcome by repeated isolation and restreaking of single colonies.)

An alternative method for the isolation of pure cultures is the pour plate (Figure 4.3). In this method, a dilute suspension of bacteria is mixed with warm molten agar, and poured into an empty petri plate. As the agar sets, cells are immobilised, and once again their progeny are all kept together, often within, as well as on, the agar. This method is especially useful for the isolation of bacteria that are unable to tolerate atmospheric levels of oxygen

Growth media for the cultivation of bacteria

A synthetic growth medium may be defined, that is, its exact chemical composition is known, or undefined. A defined growth medium may have few or many con-stituents, depending on the nutritional requirements of the organism in question. Examples of each are given in Table 4.3. An undefined or complex medium may have a variable composition due to the inclusion of a component such as blood, yeast extract or tap wa-ter (Table 4.4). Peptones are also commonly found in complex media; these are the products of partially di-gesting protein sources such as beef or casein. The exact composition of a complex medium is neither known nor critically important. A medium of this type would generally be chosen for the cultivation of fastidious bacteria such as Neisseria gonorrhoeae(thecausative agent of gonorrhoea); it is easier and less ex-pensive to supply the many nutrients required by such an organism in this form rather than supplying them all in-dividually. Bacteria whose specific nutrient requirements are not known are also grown on complex media. 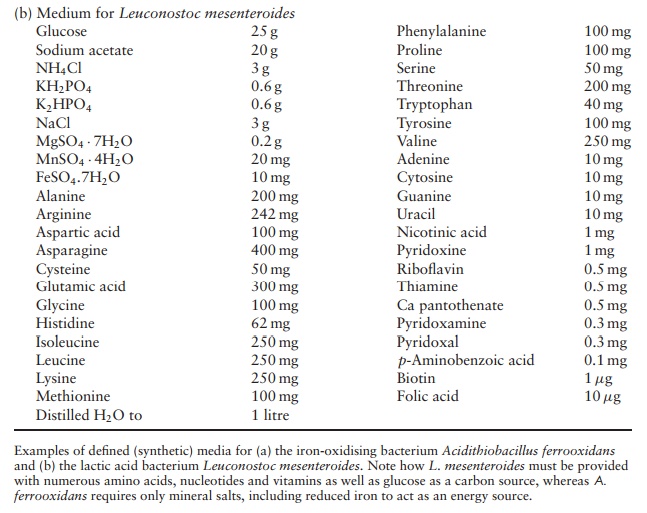 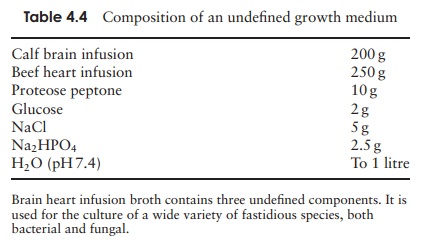 pathogenic bacterium Salmonella typhi, one of the few organisms that can tolerate the bismuth. Specific media called differentialmedia can be used to distinguish be-tween organisms whose growth they support, usually by means of a coloured indica-tor. MacConkey agar contains lactose and a pH indicator, allowing the differentiation between lactose fermenters (red colonies) and non-lactose fermenters (white/pale pink colonies). Many me-dia act both selectively and differentially; MacConkey agar, for example, also contains bile salts and the dye crystal violet, both of which serve to inhibit the growth of unwanted Gram-positive bacteria. Mannitol salt agar is also both selective and differential. The high (7.5 per cent) salt content suppresses growth of most bacteria, whilst a combination of mannitol and an indicator permits the detection of mannitol fer-menters in a similar fashion to that just described. Sometimes, it is desirable to isolate an organism that is present in small numbers in a large mixed population (e.g. faeces or soil).Enrichment media provide conditions that selectively encourage the growth of these organisms; the use of blood agar in the isolation of streptococci provides an example of such a medium. Blood agar can act as a differential medium, in allow-ing the user to distinguish between haemolytic and non-haemolytic bacteria.

Microbial cultures are preserved by storage at low temperatures, in order to suspend growth processes. For short periods, most organisms can be kept at refrigerator temper-ature (around 4◦ C), but for longer-term storage, more specialised treatment is necessary. Using deep freezing or freeze-drying, cultures can be kept for many years, and then resurrected and re-cultured. Deep freezing requires rapid freezing to −70 ◦ C to −95 ◦ C, while freeze-drying (lyophilisation) involves freezing at slightly less extreme temperatures and removing the water content under vacuum. Long-term storage may be desirable to avoid the development of mutations or loss of cell viability.