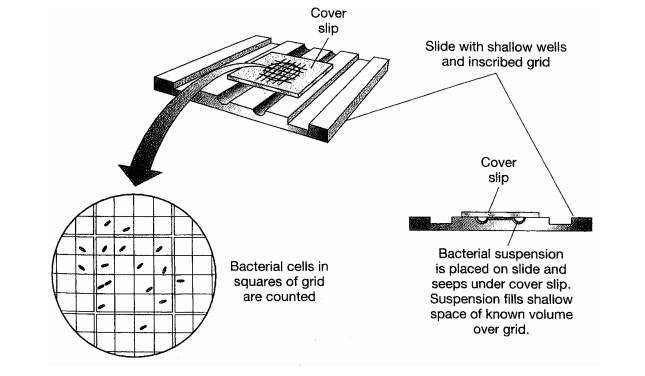 Several methods exist for the measurement of bacterial numbers, most of which are also applicable to the enumeration of other unicellular forms such as yeasts. Such methods fall into two main categories: those that count total cell numbers, and those that count viable cells only.

Several methods exist for the measurement of bacterial numbers, most of which are also applicable to the enumeration of other unicellular forms such as yeasts. Such methods fall into two main categories: those that count total cell numbers, and those that count viable cells only.

Total cell counts are generally done by direct microscopic examination. A specialisedglass slide is employed, which carries an etched grid of known area (Figure 5.1). The depth of the liquid sample is also known, so by counting the number of cells visible in the field of view, the number of cells per unit volume can be determined. The method may be made more accurate by the use of a fluorescent dye such as acridine orange, which binds to DNA, and hence avoids confusion with non-cellular debris. However, such methods cannot differentiate between living and non-living cells. Their usefulness is further limited by the fact that the smallest bacteria are difficult to resolve as indi-vidual cells by light microscopy. Other total cell count methods use cell-sorting devices, originally developed for separating blood cells in medical research. These pass the cell suspension through an extremely fine nozzle, and a detector registers the conductivity change each time a particle passes it. Again, no distinction can be made between viable and non-viable cells.

A viable cell count, on the other hand, is a measure of the number of living cells in a sample, or more specifically those capable of multiplying and producing a visible colony of cells. It is most commonly estimated by spreading a known volume of cell suspension onto an agar plate, and counting the number of colonies that arise after a period of 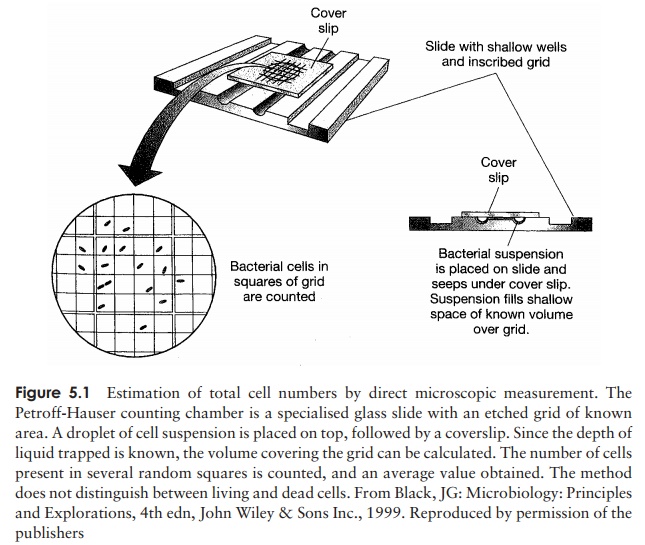 incubation. The method is based on the premise that each visible colony has derived from the repeated divisions of a single cell. In reality, it is accepted that this is not always the case, and so viable counts are expressed in colony-forming units (cfu), rather than cells, per unit volume. It is generally necessary to dilute the suspension before plating out, otherwise the resulting colonies will be too numerous to count. In order to improve statistical reliability, plates are inoculated in duplicate or triplicate, and the mean value is taken.

Viable cell counts can also be made using liquid media, in the most probable number(MPN) technique. Here, a series of tubes containing a broth are inoculatedwith a sample of a progressively more dilute cell suspension, incubated, and examined for growth. The method is based on the statistical probability of each sample containing viable cells. It is well suited to the testing of drinking water, where low bacterial densities are to be expected.

Another method employed for the enumeration of bacteria in water is the membranefilter test. Here, a large volume of water is passed through a membrane filter with apore size (0.45 µm) suitable for trapping bacteria (Figure 5.2). The filter is placed on an appropriate solid growth medium and colonies allowed to develop. 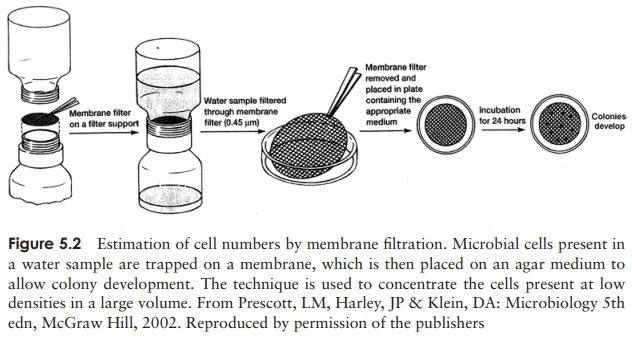 None of the methods described above provides a particularly rapid result, yet some-times it is desirable to have an estimate of bacterial numbers immediately. 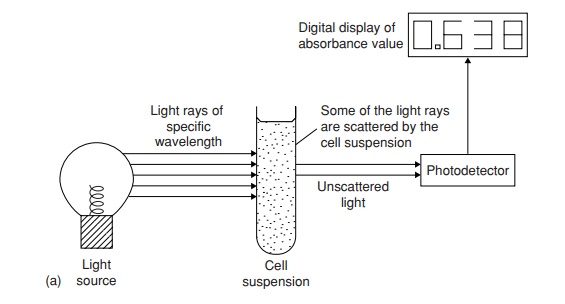 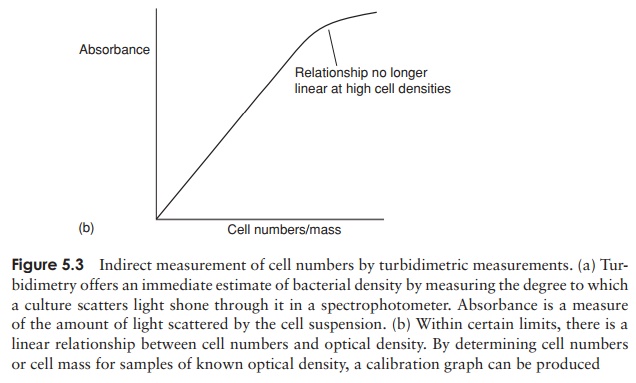 A useful method for doing this is based on how cloudy or turbid the liquid growth medium becomes due to bacterial growth. Turbidimetric methods measure the change in optical density or absorbance of the medium, that is, how much a beam of light is scattered by the suspended particulate matter (Figure 5.3). They can be carried out very quickly by placing a sample in a spectrophotometer. Values of optical density can be directly related to bacterial numbers or mass by reference to a standard calibration curve. Thus, an estimate of bacterial numbers, albeit a fairly approximate one, can be obtained almost instantaneously during an experimental procedure. Other indirect methods of measuring cell density include wet and dry weight estimations, and the measurement of cell components such as total nitrogen, protein or nucleic acid.