As the following section shows, growth may be profoundly affected by a number of physical factors.

We discussed the nutrient requirements of microorganisms. Assuming these are present in an adequate supply, what other factors do we need to consider in order to provide favourable conditions for microbial growth? As the following section shows, growth may be profoundly affected by a number of physical factors.

Microorganisms as a group are able to grow over a wide range of temperatures, from around freezing to above boiling point. For any organism, the minimum and maximumgrowth temperatures define the range over which growth is possible; this is typically about 25–30 ◦ C. Growth is slower at low temperatures because enzymes work less efficiently and also because lipids tend to harden and there is a loss of membrane fluid-ity. Growth rates increase with temperature until the optimum temperature is reached, then the rate falls again (Figure 5.4). The optimum and limiting temperatures for an organism are a reflection of the temperature range of its enzyme systems, which in turn are determined by their three-dimensional protein structures. The op-timum temperature is generally closer to the maximum growth temperature than the minimum. Once the optimum value is passed, the loss of activity caused by denatu-ration of enzymes causes the rate of growth to fall away sharply (see also Figures 6.3 and 6.4). 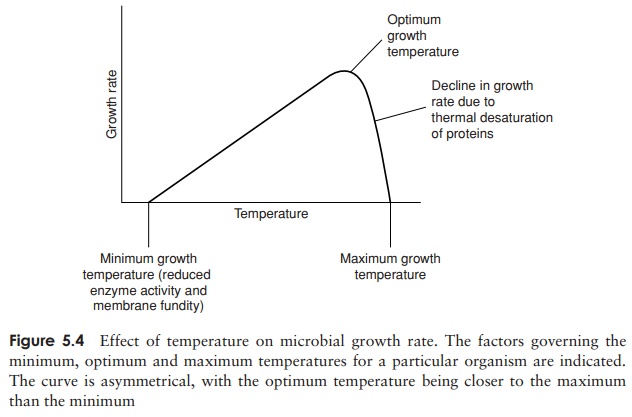 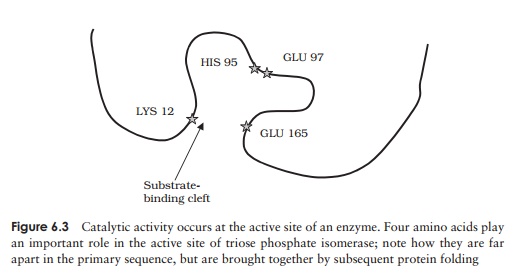 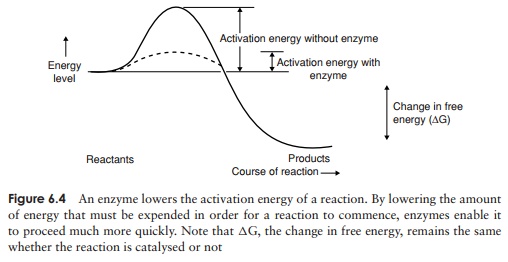 The majority of microorganisms achieve optimal growth at ‘middling’ temperatures of around 20–45 ◦ C; these are called mesophiles (Figure 5.5). Contrast these with ther-mophiles, which have become adapted to not only surviving, but thriving at much highertemperatures. Typically, these would be capable of growth within a range of about 40–80 ◦ C, with an optimum around 50–65 ◦ C. Extreme thermophiles have optimum values in excess of this, and can tolerate temperatures in excess of 100 ◦ C. In 2003, a member of the primitive bacterial group called the Archaea  was reported as growing at a temperature of 121 ◦ C, a new world record! Psychrophiles occupy the other extreme of the temperature range; they can grow at 0◦ C, with optimal growth occurring at 15 ◦ C or below. Such organisms are not able to grow at tem-peratures above 25◦ C or so. Psychrotrophs, on the other hand, although they can also grow at 0 ◦ C, have much higher temperature optima (20–30 ◦ C). Members of this group are often economically significant due to their ability to grow on refrigerated foodstuffs. 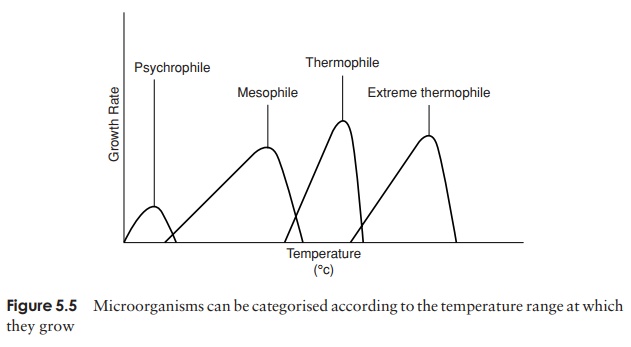 In the laboratory, appropriate temperatures for growth are provided by culturing in an appropriate incubator. These come in a variety of shapes and sizes, but all are thermostatically controlled and generally hold the temperature within a degree or two of the desired value.

Microorganisms are strongly influenced by the prevailing pH of their surroundings. As with temperature, we can define minimum, optimum and maximum values for growth of a particular type (Figure 5.6). The pH range (between minimum and maximum values) is greater in fungi than it is in bacteria. Most microorganisms grow best around neutrality (pH 7). Many bacteria prefer slightly alkaline conditions but relatively few 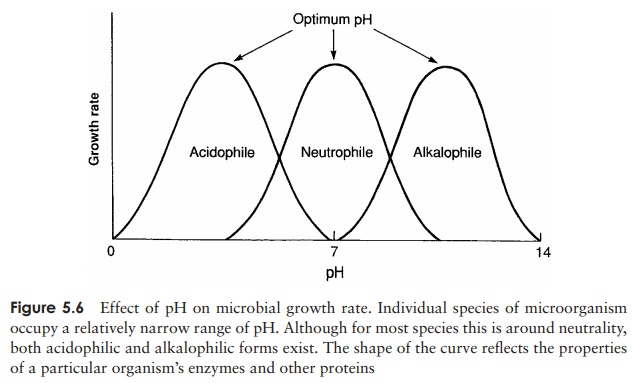 are tolerant of acid conditions, and fewer still are aci-dophilic. Fungi, on the other hand, generally preferslightly acid conditions and therefore tend to dominate bacteria when these prevail. The reason for the growth rate falling away either side of the optimum value is again due to alterations in three-dimensional protein structure.

The pH value of growth media is adjusted to the de- sired value by the addition of acid or alkali during its preparation. The metabolic ac-tivities of microorganisms often means that they change the pH of their environment as growth proceeds, so it is important in a laboratory growth medium that a desirable pH is not only set but maintained. This is achieved by the use of an appropriate buffer system. Phosphate buffers are widely used in the microbiology laboratory; they enable media to minimise changes in their pH when acid or alkali is produced.

Oxygen is present as a major constituent (20 per cent) of our atmosphere, and most life forms are dependent upon it for survival and growth. Such organisms are termedaerobes. Not all organisms are aerobes however; some anaerobes are able to survive in the absence of oxygen,and for some this is actually a necessity.

Aerobic organisms require oxygen to act as a terminal electron acceptor in their respiratory chains. Such organisms, when grown in laboratory culture, must therefore be provided with enough oxygen to sat-isfy their requirements. For a shallow layer of medium such as that in a petri dish, sufficient oxygen is available dissolved in surface moisture. In a deeper culture such asa flask of broth however, aerobes will only grow in the surface layers unless additional oxygen is provided (oxygen is poorly soluble in water). This is usually done by shaking or mechanical stirring.

Obligate anaerobes cannot tolerate oxygen at all. They are culturedin special anaerobic chambers, and oxygen excluded from all liquid and solid media. Facultative anaerobes are able to act like aerobes in the presence of oxygen, but have theadded facility of being able to survive when conditions become anaerobic.Aerotolerantanaerobes are organisms that are basically anaerobic; although they are not inhibited byatmospheric oxygen, they do not utilise it. Microaerophiles require oxygen, but are only able to tolerate low concentrations of it (2–10 per cent), finding higher concentrations harmful. Organisms inoculated into a static culture medium will grow at positions that reflect their oxygen preferences (Figure 5.7). 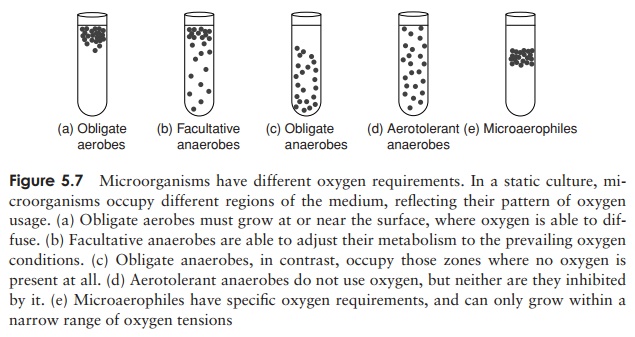 We saw that autotrophic organisms are able to use carbon dioxide as a carbon source; when grown in culture, these are provided with bicarbonate in their growth medium or incubated in a CO2-enriched atmosphere. However, heterotrophic bacteria also require small amounts of carbon dioxide, which is incorporated into var-ious metabolic intermediates. This dependency can be demonstrated by the failure of these organisms to grow if carbon dioxide is deliberately removed from the atmosphere.

Osmosis is the diffusion of water across a semipermeable membrane from a less con-centrated solution to a more concentrated one, equalising concentrations. The pressure required to make this happen is called the osmotic pressure. If a cell were placed in ahypertonic solution (one whose solute concentration ishigher), osmosis would lead to a loss of water from the cell (plasmolysis). This is the basis of using high con-centrations of salt or other solutes in preserving foods against microbial attack. In the opposite situation, wa-ter would pass from a dilute (hypotonic) solution into the cell, causing it to swell and burst. The rigid cell walls of bacteria prevent them from bursting; this, together with their minute size, makes them less sensitive to variationsin osmotic pressure than other types of cell. They are generally able to tolerate NaCl con-centrations of between 0.5 and 3.0 per cent. Haloduric (‘salt-tolerant’) bacteria are able to tolerate concentrations ten times as high, but prefer lower concentrations, whereas halophilic(‘salt-loving’) forms are adapted to grow best in conditions of high salinitysuch as those that prevail in the Dead Sea in the Middle East. In order to do this without plasmolysis occurring, they must build up a higher internal solute concentration, which they do by actively concentrating potassium ions inside the cell.

Phototrophic organisms require light in order to carry out photosynthesis. In the lab-oratory, care must be taken that light of the correct wavelength is used, and that the source used does not also act as a heat source. Fluorescent light produces little heat, but does not provide the wavelengths in excess of 750 nm needed by purple and green photosynthetic bacteria.