Within any embedded system design that uses external memory, it is almost a sure bet that the system will contain a mixture of non-volatile memory such as EPROM (erasable pro-grammable read only memory) to store the system software and DRAM (dynamic random access memory) for use as data and additional program storage.

Within any embedded system, memory is an important part of the design, and faced with the vast variety of memory that is available today, choosing and selecting the right type for the right application is of paramount importance. Today's designs use more than just different types of memory and will include both memory management and memory protection units to partition and isolate the memory system. Memory caches are used to keep local copies of data and code so that it is accessed faster and does not delay the processor. As a result, the memory subsystem has become extremely complex. Designs only seen on mainframes and supercomputers are now appearing on the humble embedded processor. This chapter goes through the different types that are available and discusses the issues associated with them that influence the design.

Within any embedded system design that uses external memory, it is almost a sure bet that the system will contain a mixture of non-volatile memory such as EPROM (erasable pro-grammable read only memory) to store the system software and DRAM (dynamic random access memory) for use as data and additional program storage. With very fast systems, SRAM (static random access memory) is often used as a replacement for DRAM because of its faster speed or within cache memory subsystems to help improve the system speed offered by DRAM. 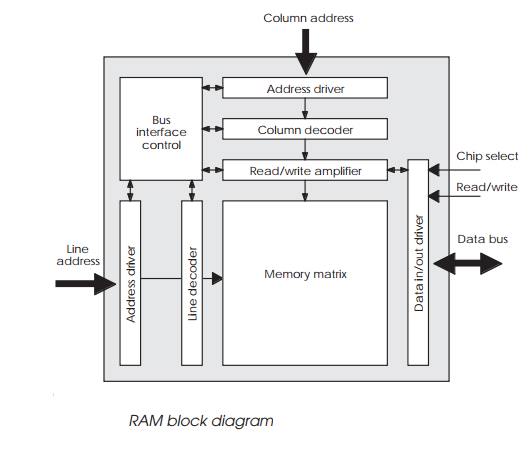 The address bus is used to select the particular location within the memory chip. The signals may be multiplexed as in the case with DRAM or non-multiplexed as with SRAM.

This bus provides the data to and from the chip. In some cases, the memory chip will use separate pins for incoming and outgoing data, but in others a single set of pins is used with the data direction controlled by the status of chip select signals, the read/write pin and output enable pins.

These can be considered as additional address pins that are used to select a specific chip within an array of memory devices. The address signals that are used for the chip selects are normally the higher order pins. In the example shown, the address decode logic has enabled the chip select for the second RAM chip — as shown by the black arrow — and it is therefore the only chip driving the data bus and supplying the data. As a result, each RAM chip is located in its own space within the memory map although it shares the same address bus signals with all the other RAM chips in the array. 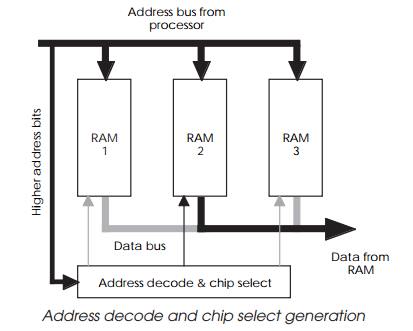 Depending on the functionality provided by the memory device, there are often additional control signals. Random access memory will have a read/write signal to indicate the type of access. This is missing from read only devices such as EPROM. For devices that have multiplexed address buses, as in the case with DRAM, there are control signals associated with this type of operation.

There are now several different types of semiconductor memory available which use different storage methods and have different interfaces.

DRAM is the predominantly used memory technology for PCs and embedded systems where large amounts of low cost memory are needed. With most memory technologies, the cost per bit is dependent on two factors: the number of transistors that are used to store each bit of data and the type of package that is used. DRAM achieves its higher density and lower cost because it only uses a single transistor cell to store each bit of data. The data storage element is actually a small capacitor whose voltage repre-sents a binary zero or one which is buffered by the transistor. In comparison, a SRAM cell contains at least four or five transistors to store a single bit of data and does not use a capacitor as the active storage element. Instead, the transistors are arranged to form a flip-flop logic gate which can be flipped from one binary state to the other to store a binary bit. 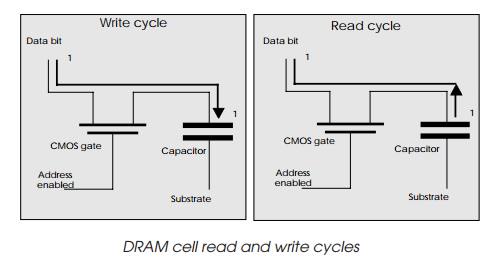 DRAM technology does have its drawbacks with the major one being its need to be refreshed on a regular basis. The term ‘dynamic’ refers to the memory’s constant need for its data to be refreshed. The reason for this is that each bit of data is stored using a capacitor, which gradually loses its charge. Unless it is fre-quently topped up (or refreshed), the data disappears.

This may appear to be a stupid type of memory — but the advantage it offers is simple — it takes only one transistor to store a bit of data whereas static memory takes four or five. The memory chip’s capacity is dependent on the number of transistors that can be fabricated on the silicon and so DRAM offers about four times the storage capacity of SRAM (static RAM). The refresh overhead takes about 3–4% of the theoretical maximum processing available and is a small price to pay for the larger storage capacity. The refresh is performed automatically either by a hardware controller or through the use of software. These techniques will be described in more detail later on in this chapter. 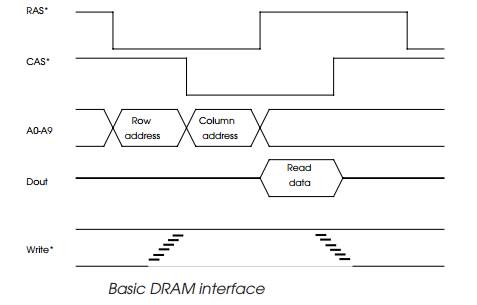 The basic DRAM interface takes the processor generated address, places half of the address (the high order bits) onto the memory address bus to form the row address and asserts the RAS* signal. This partial address is latched internally by the DRAM. The remaining half (the low order bits), forming the column address, are then driven onto the bus and the CAS* signal asserted. After the access time has expired, the data appears on the Dout pin and is latched by the processor. The RAS* and CAS* signals are then negated. This cycle is repeated for every access. The majority of DRAM specifications define minimum pulse widths for the RAS* and CAS* and these often form the major part in defining the memory access time. When access times are quoted, they usually refer to the time from the assertion of the RAS* signal to the appearance of the data. There are several variations on this type of interface, such as page mode and EDO. These will be explained later on in this chapter

A derivative of DRAM is the VRAM (video RAM), which is essentially a DRAM with the ability for the processor to update its contents at the same time as the video hardware uses the data to create the display. This is typically done by adding a large shift register to a normal DRAM. This register can be loaded with a row or larger amounts of data which can then be serially clocked out to the video display. This operation is in parallel with normal read/ write operations using a standard address/data interface.