The MEI protocol — modified, exclusive, invalid — does not implement the shared state and so does not support the MESI shared state where multiple processors can cache shared data.

The MEI protocol — modified, exclusive, invalid — does not implement the shared state and so does not support the MESI shared state where multiple processors can cache shared data. 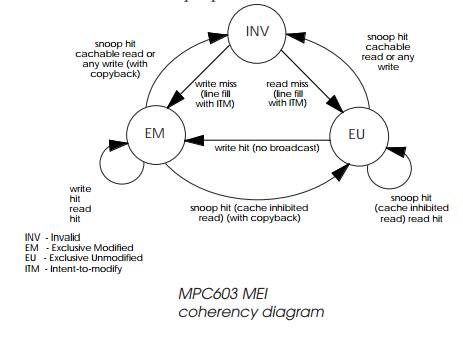 The MPC603 uses this simplified form of protocol to sup-port other intelligent bus masters such as DMA controllers. It is not as good as the MESI bus for true multiprocessor support. On the other hand, it is less complex and easier to implement. The three states are defined as follows:

Exclusive unmodified The target address is in the cache but the data is coherent with system memory.

Exclusive modified The target address is in the cache, but the contents have been modified and are not coherent with system memory. No other cache in the system has this data.

Note that the cache coherency implementation is processor specific and may change. The two mechanisms described here are the two most commonly used methods for processors and are likely to form the basis of future designs.

Two final points: these schemes require information to be passed by the external buses to allow other bus masters to identify the transitions. This requires the hardware design to implement them. If this is not done, these schemes will not work and the software environment may require extensive change and the imposition of constraints. Cache coherency may need to be re-stricted to cache inhibited or write-through. DMA accesses could only be made to cache inhibited memory regions. The supervisor must take responsibility for these decisions and implementations to ensure correct operation. In other words, do not assume that cache coherency software for one hardware design will work on another. It will, if the bus interface design is the same. It will not if they are different.

Finally, cache coherency also means identifying the areas of memory which are not to be cached.

The adoption of burst interfaces by virtually all of today’s high performance processors has led to the development of special memory interfaces which include special address generation and data latches to help the designer. Burst interfaces take advantage of page and nibble mode memories which supply data on the first access in the normal time, but can supply subsequent data far quicker.

The burst interface, which is used on processors from Motorola, Intel, AMD, MIPs and many other manufacturers gains its performance by fetching data from the memory in bursts from a line of sequential locations. It makes use of a burst fill technique where the processor will access typically four words in succession, enabling a complete cache line to be fetched or written out to memory. The improved speed is obtained by taking advantage of page mode or static column memory. These type of memories offer faster access times — single cycle in many cases — after the initial access is made.

The advantage is a reduction in clock cycles needed to fetch the same amount of data. To fetch four words with a three clock memory cycle takes 12 clocks. Fetching the same amount of data using a 2-1-1-1 burst (two clocks for the first access, single cycles for the remainder) takes only five clocks. This type of interface gives a good fit with the page mode DRAM where the first access is used to set up the page access and the remainder of the burst accesses addresses within the page, thus taking advantage of the faster access.

Burst fill offers advantages of faster and more efficient memory accesses, but there are some fundamental changes in its operation when compared with single access buses. This is par-ticularly so with SRAM when it is used as part of a cache:

For a designer implementing such a system there are four methods of improving the SRAM interface and specification to meet the timing criteria:

While faster and faster memories are becoming available, they are more expensive, and memory speeds are now becoming limited by on- and off-chip buffer delays rather than the cell access times. The latter three methods depend on semiconductor manu-facturers recognising the designer’s difficulties and providing static RAMs which interface better with today’s high performance processors.

This approach is beneficially for many high speed proces-sors, but it is not a complete solution for the burst interfaces. They still need external logic to generate the cyclical addresses from the presented address at the beginning of the burst memory access. This increases the design complexity and forces the use of faster memories than is normally necessary simply to cope with the propagation delays. The obvious step is to add this logic to the latches and registers of a synchronous memory to create a protocol specific memory that supports certain bus protocols. The first two members of Motorola’s protocol specific products are the MCM62940 and MCM62486 32k × 9 fast static RAMs. They are, as their part numbering suggests, designed to support the MC68040 and the Intel 80486 bus burst protocols. These parts offer access times of 15 and 20 ns.

The first access may take two processor clocks but remain-ing accesses can be made in a single cycle. There are some restric-tions to this: the subsequent accesses must be in the same memory page and the processor must have somewhere to store the extra data that can be collected. The obvious solution is to use this burst interface to fill a cache line. The addresses will be in the same page and by storing the extra data in a cache allows a processor to use it at a later date without consuming additional bus bandwidth. The main problem faced by designers with these interfaces is the generation of the new addresses. In most designs the processor will only issue the first address and will hold this constant during the extra accesses. It is up to the interface logic to take this address and increment it with every access. With processors like the MC68030, this function is a straight incremental count. With the MC68040, a wrap-around burst is used where the required data is fetched first and the rest of the line fetched, wrapping around to the line beginning if necessary. Although more efficient for the processor, the wrap-around logic is more complicated. 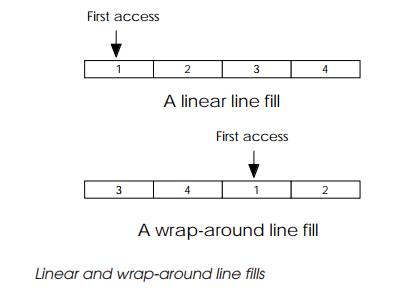 The solution is to add this logic along with latches and registers to a memory to create a specific part that supports certain bus protocols. The first two members of Motorola’s protocol specific products are the MCM62940 and MCM62486 32k × 9 fast static RAMs. They are, as their part numbering suggests, designed to support the MC68040 and the Intel 80486 bus burst protocols. These parts offer access times of 15 and 20 ns.

The MCM62940 has an on-chip burst counter that exactly matches the MC68040 wrap-around burst sequence. The address and other control data can be stored either by using the asynchro-nous or synchronous signals from the MC68040 depending on the design and its needs. A late write abort is supported which is useful in cache designs where cache writes can be aborted later in the cycle than normally expected, thus giving more time to decide whether the access should result in a cache hit or be delayed while stale data is copied back to the main system memory.

The MCM62486 has an on-chip burst counter that exactly matches the Intel 80486 burst sequence, again removing external logic and time delays and allowing the memory to respond to the processor without the need for the wait state normally inserted at the cycle start. In addition, it can switch from read to write mode while maintaining the address and count if a cache read miss occurs, allowing cache updating without restarting the whole cycle.