The biggest challenge with cache design is how to solve the problem of data coherency, while remaining hardware and soft-ware compatible. The issue arises when data is cached which can then be modified by more than one source.

The biggest challenge with cache design is how to solve the problem of data coherency, while remaining hardware and soft-ware compatible. The issue arises when data is cached which can then be modified by more than one source. An everyday analogy is that of a businessman with two diaries — one kept by his secretary in the office and the other kept by him. If he is out of the office and makes an appointment, the diary in the office is no longer valid and his secretary can double book him assuming, incorrectly, that the office diary is correct.

This problem is normally only associated with data but can occur with instructions within an embedded application. The stale data arises when a copy is held both in cache and in main memory. If either copy is modified, the other becomes stale and system coherency is destroyed. Any changes made by the processor can be forced through to the main memory by a ‘write-through’ policy, where all writes automatically update cache and main memory. This is simple to implement but does couple the processor unnec-essarily to the slow memory. More sophisticated techniques, like ‘copy-back’ and ‘modified write-back’ can give more performance (typically 15%, although this is system and software dependent) but require bus snooping support to detect accesses to the main memory when the valid data is in the cache.

The ‘write-through’ mechanism solves the problem from the processor perspective but does not solve it from the other direction. DMA (Direct Memory Access) can modify memory directly without any processor intervention. Consider a task swap-ping system. Task A is in physical memory and is cached. A swap occurs and task A is swapped out to disk and replaced by task B at the same location. The cached data is now stale. A software solution to this involves flushing the cache when the page fault happens so the previous contents are removed. This can destroy useful cached data and needs operating system support, which can make it non–compatible. The only hardware solution is to force any access to the main memory via the cache, so that the cache can update any modifications.

This provides a transparent solution — but it does force the processor to compete with the DMA channels and restricts cach-ing to the main memory only, with a resultant impact on perform-ance.

While many system designs use cache memory to buffer the fast processor from the slower system memory, it should be remembered that access to system memory is needed on the first execution of an instruction or software loop and whenever a cache miss occurs. If this access is too slow, these overheads greatly diminish the efficiency of the cache and, ultimately, the proces-sor’s performance. In addition, switching on caches can cause software that works perfectly to crash and, in many configura-tions, the caches remain switched off to allow older software to execute correctly.

Other problems can occur when data that is not intended to be cached is cached by the system. Shared memory or I/O ports are two areas that come immediately to mind. Shared memory relies on the single memory structure to contain the recent data. If this is cached then any updates may not be made to the shared memory. Any other CPU or DMA that accesses the shared memory will not get the latest data and the stale data may cause the system to crash. The same problem can happen with I/O ports. If accesses are cached then reading an I/O port to get status information will return with the cached data which may not be consistent with the data at the I/O port. It is important to be able to control which memory regions are cached and which are not. It should be no surprise that MMUs and memory protection units are used to perform this function and allow the control of the caches to be performed automatically based on memory addresses and associ-ated access bits.

A lot is made of cache implementations — but unless the main system memory is fast and software reliable, system and software performance will degrade. Caches help to regain per-formance lost through system memory wait states but they are never 100% efficient. A system with no wait states always pro-vides the best performance. Add to that the need for control and the selection of the right cache coherency policy for the system and designing for any system that has caches requires a detailed understanding of what is going on to get the best out of the system.

In this case, all data writes go through to main memory and update the system as well as the cache. This is simple to implement but couples the processor unnecessarily to slow memory. If data is modified several times before another master needs it, the write-through policy consumes external bus bandwidth supplying data that is not needed. This is not terribly efficient. In its favour, the scheme is very simple to implement, providing there is only a single cache within the system. 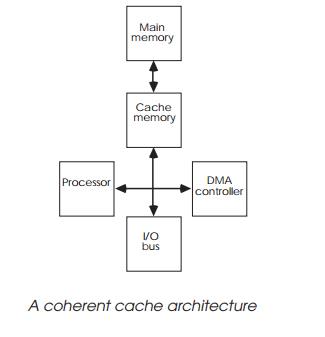 If there are more than two caches, the stale data problem reappears in another guise. Consider such a system where two processors with caches have a copy of a global variable. Neither processor accesses main memory when reading the variable, as the data is supplied by the respective caches. Processor A now modifies the variable — its cache is updated, along with the system memory. Unfortunately, processor B´s cache is left with the old stale data, creating a coherency problem. A similar prob-lem can occur within paging systems.

DMA (direct memory access) can modify memory directly without any processor intervention. Consider a UNIX paging system. Page A is in physical memory and is cached. A page fault occurs and page A is swapped out to disk and replaced by page B at the same location. The cached data is now stale. A software solution to this involves flushing the cache when the page fault happens so the previous contents are removed. This can destroy useful cached data and needs operating system support, which can make it non-compatible. The only hardware solution is to force any access to the main memory via the cache, so that the cache can update any modifications. This provides a transparent solution, but it does force the processor to compete with the DMA channels, and restricts caching to the main memory only, with the subsequent reduced performance.

In this case, the cache is updated first but the main memory is not updated until later. This is probably the most efficient method of caching, giving 15–20% improvement over a straight write-through cache. This scheme needs a bus snooping mecha-nism for coherency and this will be described later.

The usual cache implementation involves adding dirty bits to the tag to indicate which cache lines or partial lines hold modified data that has not been written out to the main memory. This dirty data must be written out if there is any possibility that the information will be lost. If a cache line is to be replaced as a result of a cache miss and the line contains dirty data, the dirty data must be written out before the new cache line can be accepted. This increases the impact of a cache miss on the system. There can be further complications if memory management page faults occur. However, these aspects must be put into perspective — yes, there will be some system impact if lines must be written out, but this will have less impact on a wider scale. It can double the time to access a cache line, but it has probably saved more performance by removing multiple accesses through to the main memory. The trick is to get the balance in your favour.

Case 3: no caching of write cycles

In this method, the data is written through but the cache is not updated. If the previous data had been cached, that entry is marked invalid and is not used. This forces the processor to access the data from the main memory. In isolation, this scheme does seem to be extremely wasteful, however, it often forms the back-bone of a bus snooping mechanism.

This is a variation on the write-through policy. Writes are written out via a buffer to the main memory. This enables the processor to update the ‘main memory’ very quickly, allowing it to carry on processing data supplied by the cache. While this is going on, the buffer transfers the data to the main memory. The main advantage is the removal of memory delays during the writes. The system still suffers from coherency problems caused through multiple caches.

Another term associated with these techniques is write allocation. A write-allocate cache allocates entries in the cache for any data that is written out. The idea behind this is simple — if data is being transferred to external memory, why not cache it, so that when it is accessed again, it is already waiting in the cache. This is a good idea if the cache is large but it does run the risk of overwriting other entries that may be more useful. This problem is particularly relevant if the processor performs block transfers or memory initialisation. Its main use is within bus snooping mecha-nisms where a first write-allocate policy can be used to tell other caches that their data is now invalid. The most important need with these methods and ideas is bus snooping.