The MC68000 bus is fundamentally different to the buses used on the MC6800 and MC6809 processors. Their buses were synchronous in nature and assumed that both memory and pe-ripherals could respond within a cycle of the bus.

The MC68000 bus is fundamentally different to the buses used on the MC6800 and MC6809 processors. Their buses were synchronous in nature and assumed that both memory and pe-ripherals could respond within a cycle of the bus. The biggest drawback with this arrangement concerned system upgrading and compatibility. If one component was uprated, the rest of the system needed uprating as well. It was for this reason that all M6800 parts had a system rating built into their part number. If a design specified an MC6809B, then it needed 2 MHz parts and subsequently, could not use an ‘A’ version which ran at 1 MHz. If a design based around the 1 MHz processor and peripherals was upgraded to 2 MHz, all the parts would need replacing. If a peripheral was not available at the higher speed, the system could not be upgraded. With the increasing processor and memory speeds, this restriction was unacceptable.

The MC68000 bus is truly asynchronous: it reads and writes data in response to inputs from memory or peripherals which may appear at any stage within the bus cycle. Provided certain signals meet certain set-up times and minimum pulse widths, the proces-sor can talk to anything. As the bus is truly asynchronous it will wait indefinitely if no reply is received. This can cause similar symptoms to a hung processor; however, most system designs use a watchdog timer and the processor bus error signal to resolve this problem.

A typical bus cycle starts with the address, function codes and the read/write line appearing on the bus. Officially, this data is not valid until the address strobe signal AS* appears but many designs start decoding prior to its appearance and use the AS* to validate the output. The upper and lower data strobes, together with the address strobe signal (both shown as DS*), are asserted to indicate which bytes are being accessed on the bus. If the upper strobe is asserted, the upper byte is selected. If the lower strobe is asserted, the lower byte is chosen. If both are asserted together, a word is being accessed.

Once complete, the processor waits until a response ap-pears from the memory or peripheral being accessed. If the rest of the system can respond without wait states (i.e. the decoding and access times will be ready on time) a DTACK* (Data Transfer ACKnowledge) signal is returned. This occurs slightly before clock edge S4. The data is driven onto the bus, latched and the address and data strobes removed to acknowledge the receipt of the DTACK* signal by the processor. The system responds by removing DTACK* and the cycle is complete. If the DTACK* signal is delayed for any reason, the processor will simply insert wait states into the cycle. This allows extra time for slow memory or peripherals to prepare data. 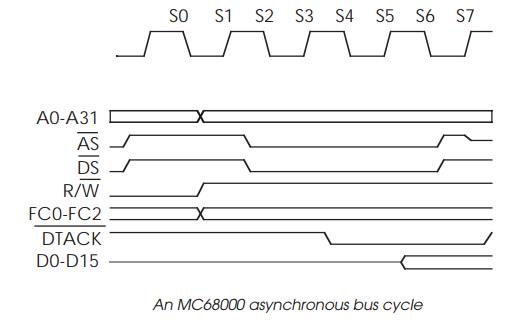 The advantages that this offers are many fold. First, the processor can use a mixture of peripherals with different access speeds without any particular concern. A simple logic circuit can generate DTACK* signals with the appropriate delays as shown. If any part of the system is upgraded, it is a simple matter to adjust the DTACK* generation accordingly. Many M68000 boards pro-vide jumper fields for this purpose and a single board and design can support processors running at 8, 10, 12 or 16 MHz. Secondly, this type of interface is very easy to interface to other buses and peripherals. Additional time can be provided to allow signal translation and conversion.