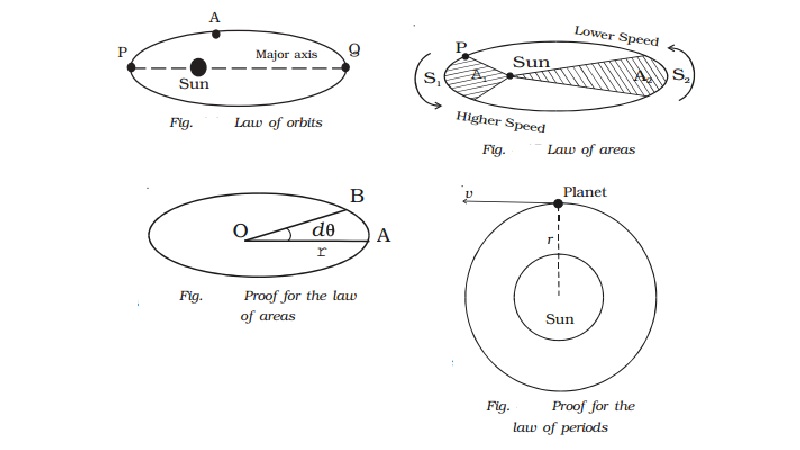 The first major theory, called the Geo-centric theory was developed by a Greek astronomer, Ptolemy. The Earth is considered to be the centre of the universe, around which all the planets, the moons and the stars revolve in various orbits. The great Indian Mathematician and astronomer Aryabhat of the 5th century AD stated that the Earth rotates about its axis. Due to lack of communication between the scientists of the East and those of West, his observations did not reach the philosophers of the West.

Nicolaus Copernicus, a Polish astronomer proposed a new theory called Helio-centric theory. According to this theory, the Sun is at rest and all the planets move around the Sun in circular orbits. A Danish astronomer Tycho Brahe made very accurate observations of the motion of planets and a German astronomer Johannes Kepler analysed Brahe's observations carefully and proposed the empirical laws of planetary motion.

(i) The law of orbits

(ii) The law of areas

The line joining the Sun and the planet (i.e radius vector) sweeps out equal areas in equal interval of times.

The orbit of the planet around the Sun is as shown in Fig.. The areas A1 and A2 are swept by the radius vector in equal times. The planet covers unequal distances S1 and S2 in equal time. This is due to  the variable speed of the planet. When the planet is closest to the Sun, it covers greater distance in a given time. Hence, the speed is maximum at the closest position. When the planet is far away from the Sun, it covers lesser distance in the same time. Hence the speed is minimum at the farthest position.

Proof for the law of areas

Consider a planet moving from A to B. The radius vector OA sweeps a small angle dθ at the centre in a small interval of time dt.

From the Fig., AB = rd θ. The small area dA swept by the radius is,

Dividing by dt on both sides

where ω is the angular velocity.

The angular momentum is given by L = mr2ω

Since the line of action of gravitational force passes through the axis, the external torque is zero. Hence, the angular momentum isconserved

(iii) The law of periods

planet and the Sun.

Proof for the law of periods

Let us consider a planet P of mass m moving with the velocity v around the Sun of mass M in a circular orbit of radius r. 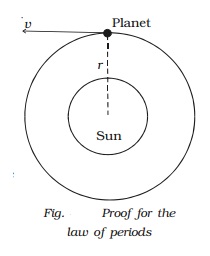 The gravitational force of attraction of the Sun on the planet is,

The centripetal force is, F = mv2/r

If T be the period of revolution of the planet around the Sun, then

GM is a constant for any planet