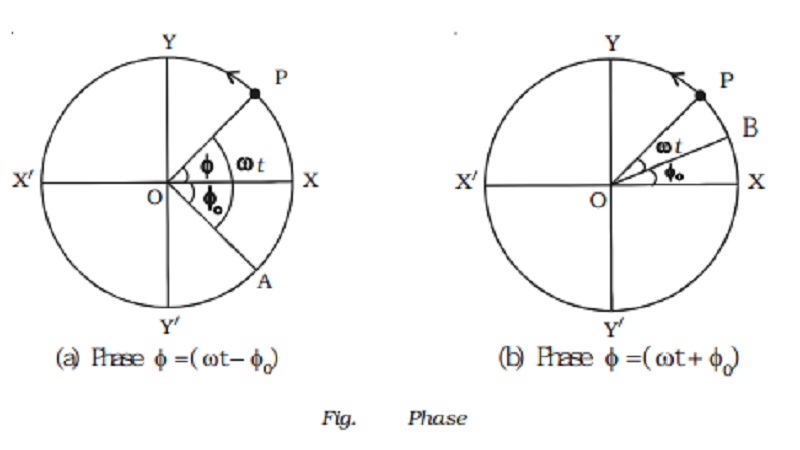 The time taken by a particle to complete one oscillation is called the time period T.

In the Fig., as the particle P completes one revolution with angular velocity ω, the foot of the perpendicular N drawn to the vertical diameter completes one vibration. Hence T is the time period .

These functions repeat when t is replaced by (t + T).

Above functions are examples of periodic function with time period T. It is clear that the motion repeats after a time T = 2π / ω where ω is the angular frequency of the motion. In one revolution, the angle covered by a particle is 2π in time T.

The number of oscillations produced by the body in one second is known as frequency. It is represented by n. The time period to complete one oscillation is 1 / n .

T = 1 n shows the time period is the reciprocal of the frequency. Its unit is hertz. ω = 2π n, is called as angular frequency. It is expressed in rad s−1.

The phase of a particle vibrating in SHM is the state of the particle as regards to its direction of motion and position at any instant of time. In the equation y = a sin (ωt + φo) the term (ωt + φo) = φ, is known as the phase of the vibrating particle. 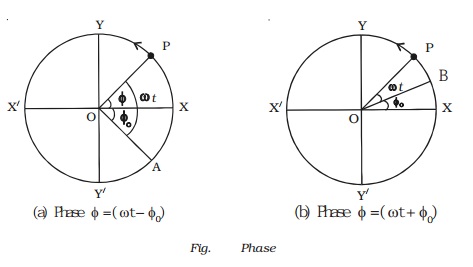 Here (ωt − φo) = φ is called the phase of the vibrating particle. (−φo) is initial phase or epoch.

If two vibrating particles executing SHM with same time period, cross their respective mean positions at the same time in the same direction, they are said to be in phase.

If the two vibrating particles cross their respective mean position at the same time but in the opposite direction, they are said to be out of phase (i.e they have a phase difference of π).

If the vibrating motions are represented by equations

We have discussed the SHM without taking into account the cause of the motion which can be a force (linear SHM) or a torque (angular SHM).

Some examples of SHM

1.     Horizontal and vertical oscillations of a loaded spring.

2.     Vertical oscillation of water in a U−tube

3.     Oscillations of a floating cylinder

4.     Oscillations of a simple pendulum