Hydrogen, third most abundant on the surface of the Universe, is being visualised as the major feature source of energy

Hydrogen, third most abundant on the surface of the Universe, is being visualised as the major feature source of energy

Hydrogen is the simplest atom which contains one electron and one proton. In contrast to other elements (except helium) its valence electron is directly in the sphere of action of the nucleus. It is invariably present in most of the compounds we come across in our daily life such as water, carbohydrate, proteins etc. As it has an unpaired electron, it is reactive and exists as a diatomic molecule (H2). However, the abundance of hydrogen gas in the earth’s atmosphere is very small.

3. It also acts as a reducing agent.

However, unlike alkali metals which have ionization energy ranging from 377 to 520 kJ mol-1, the hydrogen has 1,314 kJ mol-1 which is much higher than alkali metals.

Like the formation of halides (X-) from halogens, hydrogen also has a tendency to gain one electron to form hydride ion (H-) whose electronic configuration is similar to the noble gas, helium. However, the electron affinity of hydrogen is much less than that of halogen atoms. Hence, the tendency of hydrogen to form hydride ion is low compared to that of halogens to form the halide ions as evident from the following reactions: 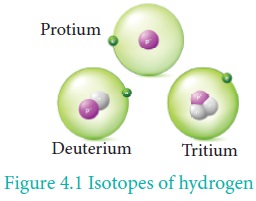 Deuterium, also known as heavy hydrogen, constitutes about 0.015 %. The third isotope, tritium is a radioactive isotope of hydrogen which occurs only in traces (~1 atom per 1018 hydrogen atoms). Due to the existence of these isotopes naturally occurring hydrogen exists as H2, HD, D2, HT, T2, and DT. The properties of these isotopes are shown in Table 4.1. 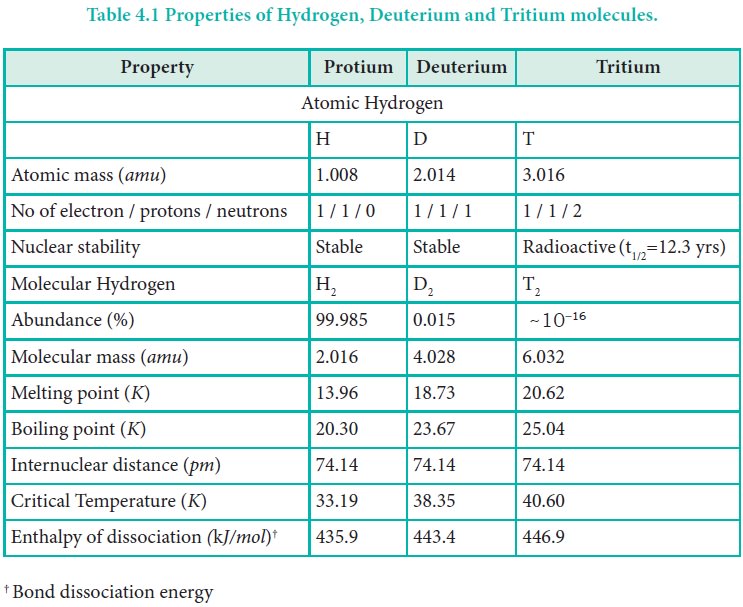 In the hydrogen atom, the nucleus has a spin. When molecular hydrogen is formed, the spins of two hydrogen nuclei can be in the same direction or in the opposite direction as shown in the figure. These two forms of hydrogen molecules are called ortho and para hydrogens respectively.

At room temperature, normal hydrogen consists of about 75% ortho-form and 25% para-form. As the ortho-form is more stable than para-form, the conversion of one isomer into the other is a slow process. However, the equilibrium shifts in favour of para hydrogen when the temperature is lowered. The para-form can be catalytically transformed into ortho-form using platinum or iron. Alternatively, it can also be converted by passing an electric discharge, heating above 800°C and mixing with paramagnetic molecules such as O2, NO, NO2 or with nascent/atomic hydrogen.