it has a non-polar structure.

Both in gas-phase and liquid-phase, the molecule adopts a skew conformation due to repulsive interaction of the OH bonds with lone-pairs of electrons on each oxygen atom. Indeed, it is the smallest molecule known to show hindered rotation about a single bond. 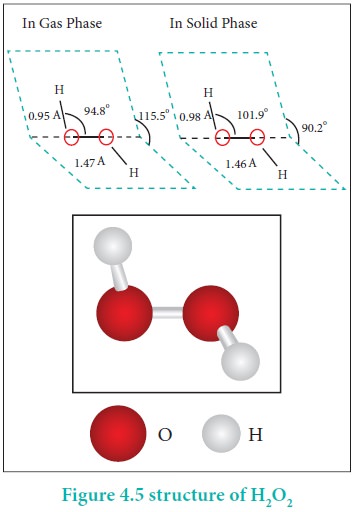 H2O2 has a non-polar structure. The molecular dimensions in the gas phase and solid phase differ as shown in figure 4.5. Structurally, H2O2 is represented by the dihydroxyl formula in which the two OH-groups do not lie in the same plane. One way of explaining the shape of hydrogen peroxide is that the hydrogen atoms would lie on the pages of a partly opened book, and the oxygen atoms along the spine. In the solid phase of molecule, the dihedral angle reduces to 90.2o due to hydrogen bonding and the O-O-H angle expands from 94.8 º to 101.9o.