Physical and Chemical Properties of Water

Water is a colourless and volatile liquid.

Water is a colourless and volatile liquid. The peculiar properties of water in the condensed phases are due to the presence of inter molecular hydrogen bonding between water molecules. Hydrogen bonding is responsible for the high melting and boiling points of water. Some of the physical parameters of water are listed in Table 4.2. 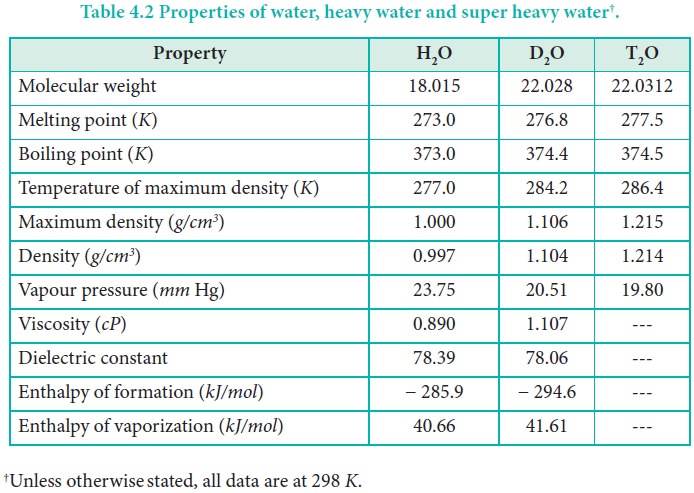 Water reacts with metals, non-metals and other compounds differently. The most reactive metals are the alkali metals. They decompose water even in cold with the evolution of hydrogen leaving an alkali solution.

The group 2 metals (except beryllium) react in a similar way but less violently. The hydroxides are less soluble than those of Group 1.

Some transition metals react with hot water or steam to form the corresponding oxides. For example, steam passed over red hot iron results in the formation of iron oxide with the release of hydrogen.

Lead and copper decompose water only at a white heat. Silver, gold, mercury and platinum do not have any effect on water. In the elemental form, the non-metals such as carbon, sulphur and phosphorus normally do not react with water. However, as we have seen earlier, carbon will react with steam when it is red (or white) hot to give water gas.

On the other hand, the halogens react with water to give an acidic solution. For example, chlorine forms hydrochloric acid and hypo chlorous acid. It is responsible for the antibacterial action of chlorine water, and for its use as bleach.

In a similar way, compounds of non-metals react with water to give acidic or alkaline solutions. For example, solutions of carbonates are slightly alkaline.

Many salts crystallized from aqueous solutions form hydrated crystals. The water in the hydrated salts may form co-ordinate bond or just present in interstitial positions of crystals.

BaCl2.2H2O – Both the water molecules are present in interstitial positions.

CuSO4.5H2O – In this compound four water molecules form co-ordinate bonds while the fifth water molecule, present outside the co-ordination, can form intermolecular hydrogen bond with another molecule. [Cu(H2O)4]SO4.H2O 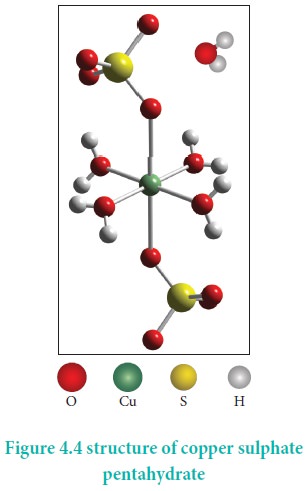