Generation of sinusoidal waves by a tuned LC circuit 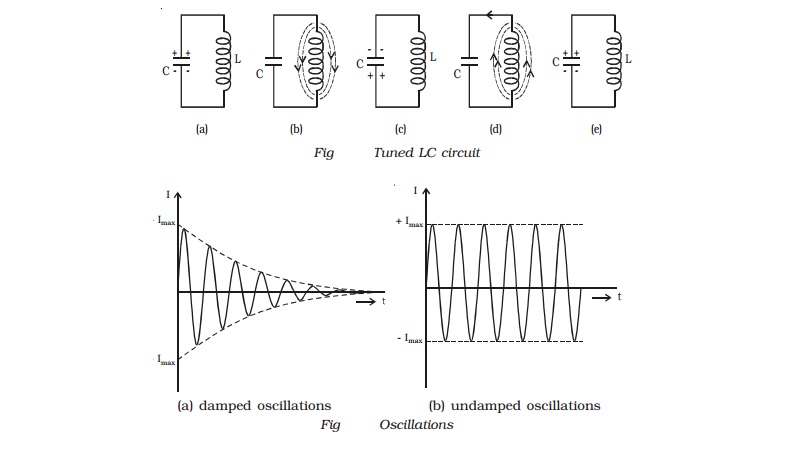 Generation of sinusoidal waves by a tuned LC circuit

If a capacitor of capacitance C and an inductor of inductance L are connected in parallel, then such a circuit represents an oscillatory circuit. 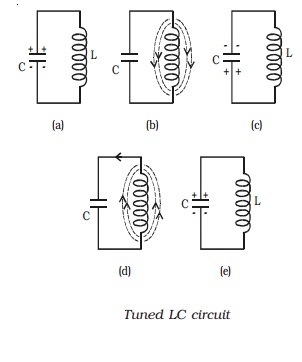 When the capacitor is completely discharged, the induced magnetic field begins to collapse, sending current in the same direction. The capacitor C is now charged with opposite polarity (Fig c). In this case, energy associated with magnetic field is converted into electrostatic energy. This energy is stored in the capacitor. Once the capacitor is completely charged, it begins to discharge in the reverse direction producing again a magnetic field across L in the opposite direction (Fig d). Again the magnetic field will collapse and will charge the capacitor. The circuit returns to the original state. (Fig e). This charging and discharging process results in oscillating current and hence electrical oscillations are set up in the LC circuit. When a LC circuit is used to store energy, it is called tank circuit. The frequency of oscillations is given by,

If there are no power losses in the LC circuit, then the electrical oscillations will continue for indefinite time. But, in practice, there is some power loss during each cycle of oscillation, as some resistance is always associated with a given LC circuit. Hence the amplitude of oscillations decreases gradually and becomes zero, when all the energy is consumed as losses. Therefore, damped oscillations are produced in the circuit (Fig a). Imax represents the maximum current flowing through the circuit.

In order to make the oscillations undamped, energy must be supplied to the circuit at the same rate, at which it is dissipated. The energy supplied should be in phase with oscillations set up in LC circuit. The applied energy should have the same frequency as that of  oscillations in the tank circuit. If these conditions are fulfilled, the circuit will produce continuous undamped oscillations (Fig b). 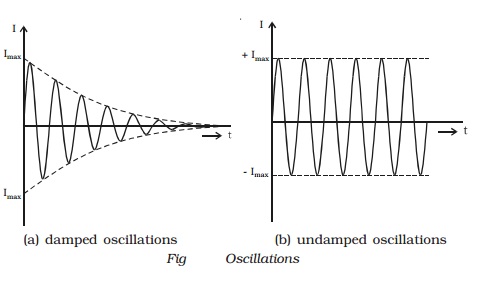