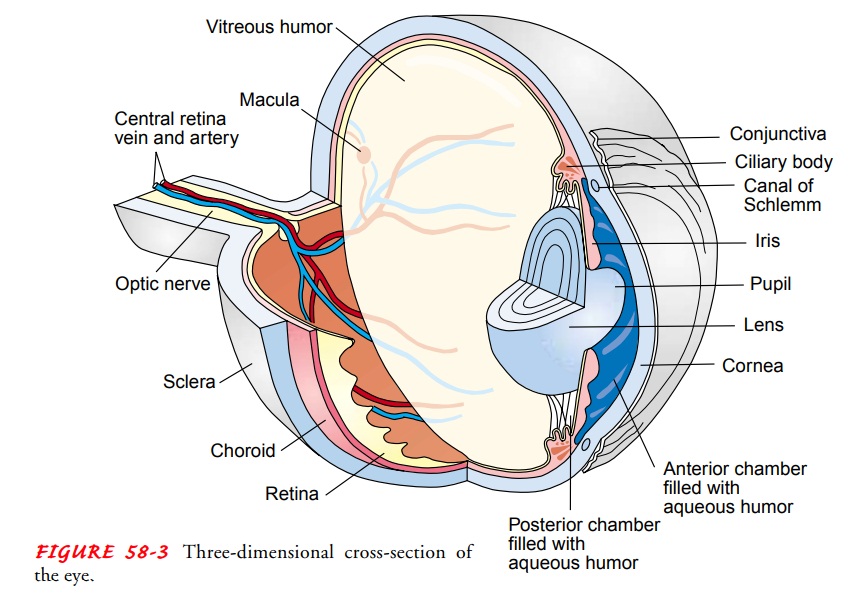 Unlike most organs of the body, the eye is available for external examination, and its anatomy is more easily assessed than many other body parts.

Unlike most organs of the body, the eye is available for external examination, and its anatomy is more easily assessed than many other body parts (Fig. 58-1). The eyeball, or globe, sits in a pro-tective bony structure known as the orbit. Lined with muscle and connective and adipose tissues, the orbit is about 4 cm high, wide, and deep, and it is shaped roughly like a four-sided pyramid, sur-rounded on three sides by the sinuses: ethmoid (medially), frontal (superiorly), and maxillary (inferiorly). 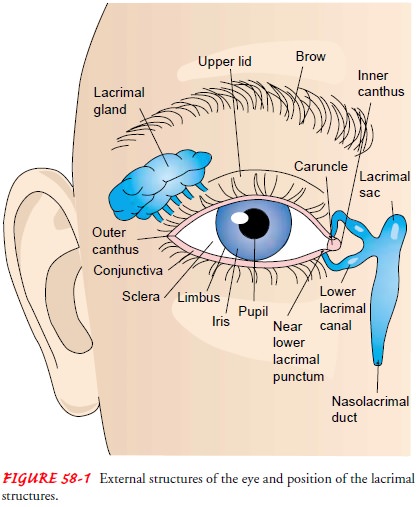 The optic nerve and the ophthalmic artery enter the orbit at its apex through the optic foramen. The eyeball is moved though all fields of gaze by the ex-traocular muscles. The four rectus muscles and two oblique mus-cles (Fig. 58-2) are innervated by cranial nerves (CN) III, IV, and VI. Normally, the movements of the two eyes are coordinated, and the brain perceives a single image. 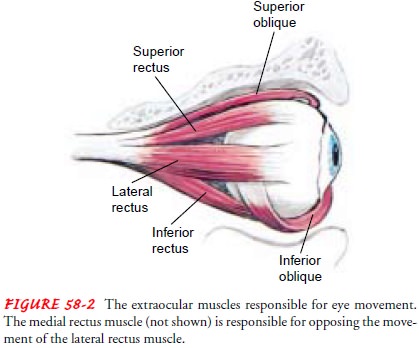 The eyelids, composed of thin elastic skin that covers striated and smooth muscles, protect the anterior portion of the eye. The eyelids contain multiple glands, including sebaceous, sweat, and accessory lacrimal glands, and they are lined with conjunctival material. The upper lid normally covers the uppermost portion of the iris and is innervated by the oculomotor nerve (CN III). The lid margins contain meibomian glands, the inferior and su-perior puncta, and the eyelashes. The triangular spaces formed by the junction of the eyelids are known as the inner or medial can-thus and the outer or lateral canthus. With every blink of the eyes, the lids wash the cornea and conjunctiva with tears.

Tears are vitally important to eye health. They are formed by the lacrimal gland and the accessory lacrimal glands. A healthy tear is composed of three layers: lipoid, aqueous, and mucoid. If there is a defect in the composition of any of these layers, the integrity of the cornea may be compromised. Tears are secreted in response to reflex or emotional stimuli.

The conjunctiva, a mucous membrane, provides a barrier to the external environment and nourishes the eye. The goblet cells of the conjunctiva secrete lubricating mucus. The bulbar con-junctiva covers the sclera, whereas the palpebral conjunctiva lines the inner surface of the upper and lower eyelids. The junction of the two portions is known as the fornix.

The sclera, commonly known as the white of the eye, is a dense, fibrous structure that comprises the posterior five sixths of the eye (Fig. 58-3). The sclera helps to maintain the shape of the eyeball and protects the intraocular contents from trauma. The sclera may have a slightly bluish tinge in young children, a dull white color in adults, and a slightly yellowish color in the elderly. Externally, it is overlaid with conjunctiva, which is a thin, transparent, mu-cous membrane that contains fine blood vessels. The conjunctiva meets the cornea at the limbus on the outermost edge of the iris. 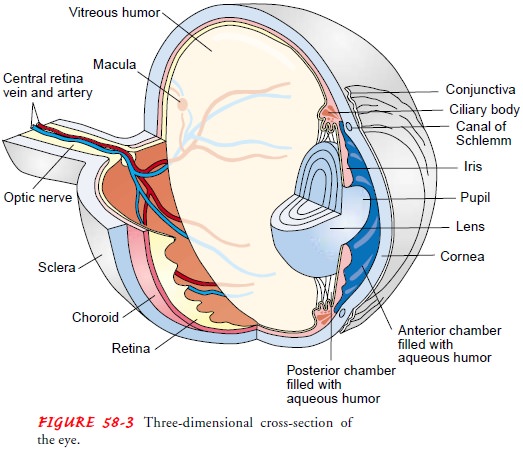 The cornea (Fig. 58-4), a transparent, avascular, domelike structure, forms the most anterior portion of the eyeball and is the main refracting surface of the eye. It is composed of five lay-ers: epithelium, Bowman’s membrane, stroma, Descemet’s mem-brane, and endothelium. The epithelial cells are capable of rapid replication and are completely replaced every 7 days.

Behind the cornea lies the anterior chamber, filled with a continually replenished supply of clear aqueous humor, which nourishes the cornea. The aqueous humor is produced by the cil-iary body, and its production is related to the intraocular pressure (IOP). Normal pressure is 10 to 21 mm Hg.

The uvea consists of the iris, the ciliary body, and the choroid. The iris, or colored part of the eye, is a highly vascularized, pig-mented collection of fibers surrounding the pupil. The pupil is a space that dilates and constricts in response to light. Normal pupils are round and constrict symmetrically when a bright light shines on them. About 20% of the population has pupils that are slightly unequal in size but that respond equally to light. Dilation and constriction are controlled by the sphincter and dilator pupil-lae muscles. The dilator muscles are controlled by the sympathetic nervous system, whereas the sphincter muscles are controlled by the parasympathetic nervous system.

Directly behind the pupil and iris lies the lens, a colorless and almost completely transparent, biconvex structure held in posi-tion by zonular fibers. It is avascular and has no nerve or pain fibers. The lens enables focusing for near vision and refocusing for distance vision. The ability to focus and refocus is called ac-commodation. The lens is suspended behind the iris by thezonules and is connected to the ciliary body. The ciliary body controls accommodation through the zonular fibers and the cil-iary muscles. The aqueous humor is anterior to the lens; posterior to the lens is the vitreous humor. All cells formed throughout life are retained by the lens, which makes the cell structure of the lens susceptible to the degenerative effects of aging. The lens con-tinues to grow throughout life, laying down fibers in concentric rings. This gradual thickening becomes evident in the fifth decade of life and eventually results in an increasingly dense core or nucleus, which can limit accommodative powers.

The choroid lies between the retina and the sclera. It is a vas-cular tissue, supplying blood to the portion of the sensory retina closest to it.

The ocular fundus is the largest chamber of the eye and con-tains the vitreous humor, a clear, gelatinous substance, com-posed mostly of water and encapsulated by a hyaloid membrane. The vitreous humor occupies about two thirds of the eye’s vol-ume and helps maintain the shape of the eye. As the body ages, the gel-like characteristics are gradually lost, and various cells and fibers cast shadows that the patient perceives as “floaters.” The vitreous is in continuous contact with the retina and is attached to the retina by scattered collagenous filaments. The vitreous shrinks and shifts with age.

In the disc, a physiologic depression or cup is present centrally, with the retinal blood vessels emanating from it. The retinal tissues arise from the optic disc and line the inner surface of the vitreous chamber. The retinal vessels also enter the eye through the optic nerve, branching out through the retina and forming superior and inferior arcades. The area of the retina responsible for central vision is the macula. The rest of the retina is responsible for pe-ripheral vision. In the center of the macula is the most sensitive area, the fovea, which is avascular and surrounded by the supe-rior and inferior vascular arcades. Two important layers of the retina are the retinal pigment epithelium (RPE) and the sensory retina. A single layer of cells constitutes the RPE, and these cells have numerous functions, including the absorption of light. The sensory retina contains the photoreceptor cells: rods and cones. Rods and cones are long, narrow cells shaped like rods or cones. The rods are mainly responsible for night vision or vision in low light, whereas the cones provide the best vision for bright light, color vision, and fine detail. Cones are distributed throughout the retina with their greatest concentration in the fovea. Rods are ab-sent in the fovea.

Good visual acuity depends on a healthy, functioning eyeball and an intact visual pathway (Fig. 58-5). This pathway is made up of the retina, optic nerve, optic chiasm, optic tracks, lateral genic-ulate bodies, optic radiations, and the visual cortex area of the brain. The pathway is an extension of the central nervous system.