cataract is a lens opacity or cloudiness.

cataract is a lens opacity or cloudiness (Fig. 58-9). Cataracts rank only behind arthritis and heart disease as a leading cause of disability in older adults. Cataracts affect nearly 20.5 million Americans who are 40 years of age or older, or about one in every six people in this age range. By age 80, more than half of all Amer-icans have cataracts. According to the World Health Organization, cataract is the leading cause of blindness in the world (Preshel & Prevent Blindness America, 2002). 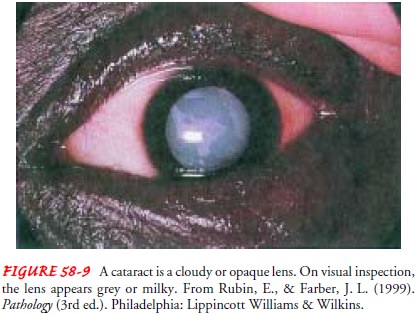 Cataracts can develop in one or both eyes at any age for a variety of causes (Chart 58-5). Visual impairment normally progresses at the same rate in both eyes over many years or in a matter of months. The three most common types of senile (age-related) cataracts are defined by their location in the lens: nuclear, cortical, and posterior subcapsular. The extent of visual impairment de-pends on the size, density, and location in the lens. More than one type can be present in one eye. 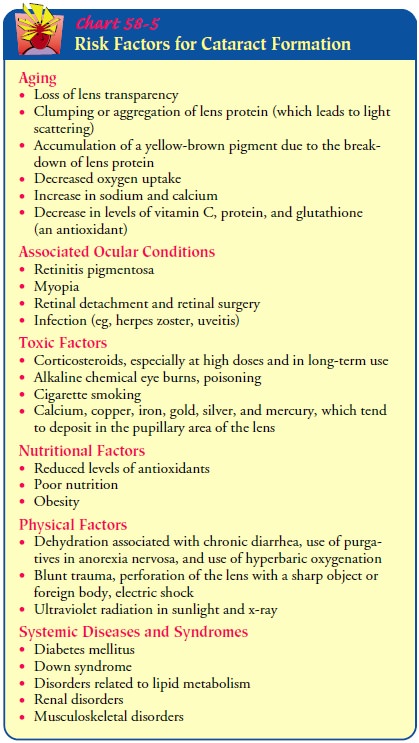 A nuclear cataract is associated with myopia (ie, nearsighted-ness), which worsens when the cataract progresses. If dense, the cataract severely blurs vision. Periodic changes in prescription eyeglasses help manage this problem.

A cortical cataract involves the anterior, posterior, or equato-rial cortex of the lens. A cataract in the equator or periphery of the cortex does not interfere with the passage of light through the center of the lens and has little effect on vision. Cortical cataracts progress at a highly variable rate. Vision is worse in very bright light. Studies show that people with the highest levels of sun-light exposure have twice the risk of developing cortical cataracts than those with low-level sunlight exposure (West et al., 1998).

Posterior subcapsular cataracts occur in front of the posterior capsule. This type typically develops in younger people and, in some cases, is associated with prolonged corticosteroid use, in-flammation, or trauma. Near vision is diminished, and the eye is increasingly sensitive to glare from bright light (eg, sunlight, headlights).

Fewer than 15% of people with cataracts suffer vision problems severe enough to require surgery. In general, if reduced vision from cataract does not interfere with normal activities, surgery may not be needed. However, in deciding when cataract surgery is to be performed, the patient’s functional and visual status should be a primary consideration. Surgery is performed on an outpatient basis and usually takes less than 1 hour, with the patient being dis-charged in 30 minutes or less afterward. Although complications from cataract surgery are uncommon, they can have significant effects on vision (Table 58-6). Restoration of visual function through a safe and minimally invasive procedure is the surgical goal, which is achieved with advances in topical anesthesia, smaller wound incision (ie, clear cornea incision), and lens design (ie, foldable and more accurate intraocular lens measurements). 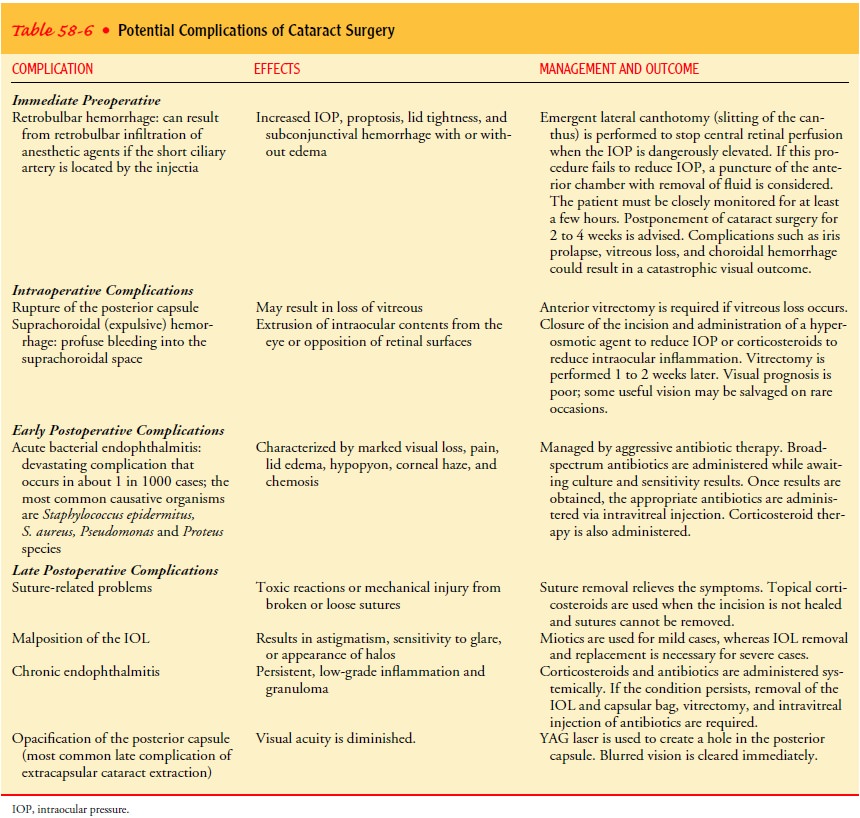 Topical anesthesia, such as lidocaine gel applied to the surface of the eye, eliminates the hazards of regional anesthesia, such as oc-ular perforation, retrobulbar hemorrhage, optic injuries, diplopia, and ptosis, and is ideal for patients receiving anticoagulants. More-over, patients can communicate and cooperate during surgery.

When both eyes have cataracts, one eye is treated first, with at least several weeks, preferably months, separating the two opera-tions. Because cataract surgery is performed to improve visual functioning, the delay for the other eye gives time for the patient and the surgeon to evaluate whether the results from the first surgery are adequate enough to preclude the need for a second operation. The delay also provides time for the first eye to recover; if there are any complications, the surgeon may decide to perform the second procedure differently.

From the late 1800s until the1970s, the technique of choice for cataract extraction was intra-capsular cataract extraction (ICCE). The entire lens (ie, nucleus, cortex, and capsule) is removed, and fine sutures close the inci-sion. ICCE is infrequently performed today; however, it is indi-cated when there is a need to remove the entire lens, such as with a subluxated cataract (ie, partially or completely dislocated lens).

Extracapsular cataract extraction (ECCE)achieves the intactness of smaller incisional wounds (less trauma to the eye) and maintenance of the posterior capsule of the lens, reducing postoperative complications, particularly aphakic reti-nal detachment and cystoid macular edema. In ECCE, a portion of the anterior capsule is removed, allowing extraction of the lens nucleus and cortex. The posterior capsule and zonular support are left intact. An intact zonular-capsular diaphragm provides the needed safe anchor for the posterior chamber intraocular lens (IOL). After the pupil has been dilated and the surgeon has made a small incision on the upper edge of the cornea, a viscoelastic substance (clear gel) is injected into the space between the cornea and the lens. This prevents the space from collapsing and facili-tates insertion of the IOL.

This method of extracapsular surgery usesan ultrasonic device that liquefies the nucleus and cortex, which are then suctioned out through a tube. The posterior capsule is left intact. Because the incision is even smaller than the standard ECCE, the wound heals more rapidly, and there is early stabi-lization of refractive error and less astigmatism. Hardware and software advances in ultrasonic technology—including new phaco needles that are used to cut and aspirate the cataract— permit safe and efficient removal of nearly all cataracts through a clear cornea incision that is as small or smaller than required for available foldable lenses. Ultimately, advances in technology will achieve an injectable IOL.

After removal of the crystalline lens, the pa-tient is referred to as aphakic (ie, without lens). The lens, which focuses light on the retina, must be replaced for the patient to see clearly. There are three lens replacement options: aphakic eye-glasses, contact lenses, and IOL implants.

Aphakic glasses are effective but heavy. Objects are magnified by 25%, making them appear closer than they actually are. Ob-jects are magnified unequally, creating distortion. Peripheral vi-sion is also limited, and binocular vision (ie, ability of both eyes to focus on one object and fuse the two images into one) is im-possible if the other eye is phakic (normal).

Contact lenses provide patients with almost normal vision, but because contact lenses need to be removed occasionally, the patient also needs a pair of aphakic glasses. Contact lenses are not advised for patients who have difficulty inserting, removing, and cleaning them. Frequent handling and improper disinfection increase the risk for infection.

Insertion of IOLs during cataract surgery is the usual approach to lens replacement. After ICCE, the surgeon implants an anterior chamber IOL in front of the iris. Posterior chamber lenses, gener-ally used in ECCE, are implanted behind the iris. ECCE and pos-terior chamber IOLs are associated with a relatively low incidence of complications (eg, hyphema, macular edema, secondary glau-coma, damage to the corneal endothelium). IOL implantation is contraindicated in patients with recurrent uveitis, proliferative di-abetic retinopathy, neovascular glaucoma, or rubeosis iridis. Like any device, IOLs can malfunction and cause complications.

The patient with cataracts should receive the usual preoperative care for ambulatory surgical patients undergoing eye surgery. According to the study on Medical Testing for Cataract Surgery, routine preoperative testing before cataract surgery does not im-prove health or clinical outcomes. Hence, the standard battery of preoperative tests should be prescribed only when they would have been indicated by the patient’s medical history (Schein et al., 2000).

To reduce the risk for retrobulbar hemorrhage (after retrobulbar injection), any anticoagulation therapy that the patient is receiv-ing is withheld, if medically appropriate. Aspirin should be with-held for 5 to 7 days, nonsteroidal anti-inflammatory medications (NSAIDs) for 3 to 5 days, and warfarin (Coumadin) until the prothrombin time of 1.5 is almost reached.

After recovery from anesthesia, the patient receives verbal and writ-ten instruction regarding how to protect the eye, administer med-ications, recognize signs of complications, and obtain emergency care. Activities to be avoided are identified in Chart 58-6. The nurse also explains that there is minimal discomfort after surgery and instructs the patient to take a mild analgesic agent, such as aceta-minophen, as needed. Antibiotic, anti-inflammatory, and cortico-steroid eye drops or ointments are prescribed postoperatively.

To prevent accidental rubbing orpoking of the eye, the patient wears a protective eye patch for 24 hours after surgery, followed by eyeglasses worn during the day and a metal shield worn at night for 1 to 4 weeks. The nurse in-structs the patient and family in applying and caring for the eye shield. Sunglasses should be worn while outdoors during the day because the eye is sensitive to light.

Slight morning discharge, some redness, and a scratchy feeling may be expected for a few days. A clean, damp washcloth may be used to remove slight morning eye discharge. Because cataract surgery increases the risk for retinal detachment, the patient must know to notify the surgeon if new floaters (ie, dots) in vision, flash-ing lights, decrease in vision, pain, or increase in redness occurs.

The eye patch is removed after the first follow-up appointment. Patients may experience blurring of vision for several days to weeks. Sutures left in the eye alter the curvature of the cornea, resulting in temporary blurring and some astigma-tism. Vision gradually improves as the eye heals. Patients with IOL implants have visual improvement faster than those waiting for aphakic glasses or contact lenses. Vision is stabilized when the eye is completely healed, usually within 6 to 12 weeks, when final corrective prescription is completed. Visual correction is needed for any remaining nearsightedness or farsightedness (even in pa-tients with IOL implants).