Ethosuximide was introduced in 1960 as the third of three marketed succinimides in the USA. Ethosuximide has very little activity against maximal electroshock but considerable efficacy against pen-tylenetetrazol seizures; it was introduced as a “pure petit mal” drug. 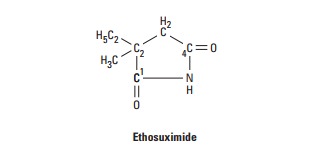 Ethosuximide has an important effect on Ca2+ currents, reducing the low-threshold (T-type) current. This effect is seen at therapeuti-cally relevant concentrations in thalamic neurons. The T-type Ca2+ currents are thought to provide a pacemaker current in thalamic neurons responsible for generating the rhythmic cortical discharge of an absence attack. Inhibition of this current could therefore account for the specific therapeutic action of ethosuximide. A recently described effect on inwardly rectifying K+ channels may also be significant.

As predicted from its activity in laboratory models, ethosuximide is particularly effective against absence seizures, but has a very narrow spectrum of clinical activity. Documentation of its effectiveness in human absence seizures was achieved with long-term electroencephalographic recording techniques. Data continue to show that ethosuximide and valproate are the drugs of choice for absence seizures and are more effective than lamotrigine.

Absorption is complete following administration of the oral dosage forms. Peak levels are observed 3–7 hours after oral administration of the capsules. Ethosuximide is not protein-bound. The drug is completely metabolized, principally by hydroxylation, to inactive metabolites. Ethosuximide has a very low total body clearance (0.25 L/kg/d). This corresponds to a half-life of approximately 40 hours, although values from 18 to 72 hours have been reported.

Therapeutic levels of 60–100 mcg/mL can be achieved in adults with dosages of 750–1500 mg/d, although lower or higher dos-ages and blood levels (up to 125 mcg/mL) may be necessary and tolerated in some patients. Ethosuximide has a linear relation-ship between dose and steady-state plasma levels. The drug might be administered as a single daily dose were it not for its adverse gastrointestinal effects; twice-a-day dosage is common.