Artificial or modified ribozymes have enormous potential in medicine and biotechnology. The ability to control the activity of a ribozyme would be very advantageous.

Artificial or modified ribozymes have enormous potential in medicine and biotechnology. The ability to control the activity of a ribozyme would be very advantageous. If a ribozyme were engineered to cleave mRNA that causes rampant growth of cancer cells, controlling its action could prevent cancer from spreading. Additionally, ribozymes could be engineered into genes used for gene therapy. By controlling the ribozyme, the clinician could modulate when and where the gene is expressed. Such control could be exerted by building riboswitches into the ribozymes and then controlling self-destruction by the presence or absence of a small effector molecule, as happens naturally in the glmS gene described earlier.

In order to engineer a ribozyme to cleave only in the presence of a certain effector molecule, a combination of modular design and in vitro selection is used. Modular design takes various domains from different ribozymes and merges them to create a new molecule. For example, the catalytic core of a particular hammerhead ribozyme can be genetically linked to the binding domain of another, changing the binding specificity of the original ribozyme (Fig. 5.33A). 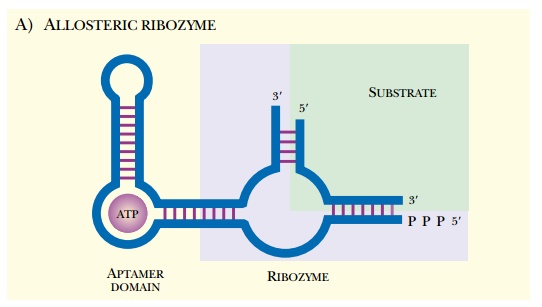 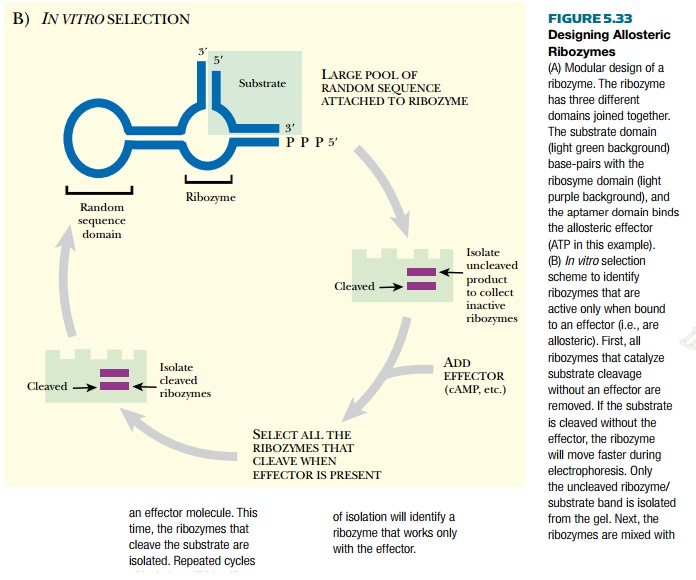 Artificial allosteric riboswitches have been selected by combining the ribozyme catalytic core with a pool of many different random sequences (see Fig. 5.33B). Some of the random sequences will, it is hoped, have the ability to bind the chosen effector and thus represent a pool of possible riboswitches. Some of the combinations will catalyze self-cleavage or substrate cleavage without regulation, and these must be eliminated. If the ribozyme construct cleaves itself, the products will move faster during electrophoresis. Therefore, the pool of possible riboswitch/ribozymes is electrophoresed, and the slower moving, uncleaved RNAs are isolated from the gel. Next, the uncleaved ribozymes are mixed with the chosen effector and incubated under cleavage-promoting conditions. This step is the positive selection step, and any ribozyme that undergoes cleavage in the presence of the effector is isolated. As before, the ribozymes are separated by gel electrophoresis, but this time the cleaved (shorter and faster) molecules are isolated. Cloning and sequencing of the isolated ribozyme constructs determines the sequence of the riboswitch domain.

Some effectors that researchers have used to control riboswitches include cyclic GMP, cyclic AMP, and cyclic CMP. Allosteric ribozymes have been artificially created that respond not only to small organic molecules such as cyclic AMP, but also to oligonucleotides, proteins, and even metal ions.