Riboswitches Are Controlled by Effector Molecules

Transcription is controlled primarily by protein factors. Nonetheless, in prokaryotes, conserved sequences have been identified that control gene expression at the RNA level.

RIBOSWITCHES ARE CONTROLLED BY EFFECTOR MOLECULES

Transcription is controlled primarily by protein factors. Nonetheless, in prokaryotes, conserved sequences have been identified that control gene expression at the RNA level. These sequences are an integral part of the messenger RNA molecules that they control and are called riboswitches. Unlike miRNAs or siRNAs, which work via base pairing, riboswitches bind small effector molecules, such as nutrients or cAMP. The riboswitches work by alternating between two different RNA secondary structures. In most cases, effector binding terminates mRNA transcription prematurely or prevents mRNA translation.

Riboswitches normally work by changing the stem and loop structure of the mRNA transcript. In attenuation riboswitches, the effector molecule binds to the mRNA as it is being transcribed. If the effector binds, changes in structure create a terminator loop, which causes the transcriptional machinery to fall off prematurely. The incomplete mRNA is degraded. When the effector is in short supply, then the mRNA is transcribed to completion (Fig. 5.31A). Alternatively, some riboswitches work through translational inhibition. Here the riboswitch controls whether or not protein translation occurs by sequestering the Shine-Dalgarno sequence. When the effector molecule is abundant, its binding changes the stem-loop structure so that the Shine-Dalgarno sequence is not accessible to the ribosomes (see Fig. 5.31B). 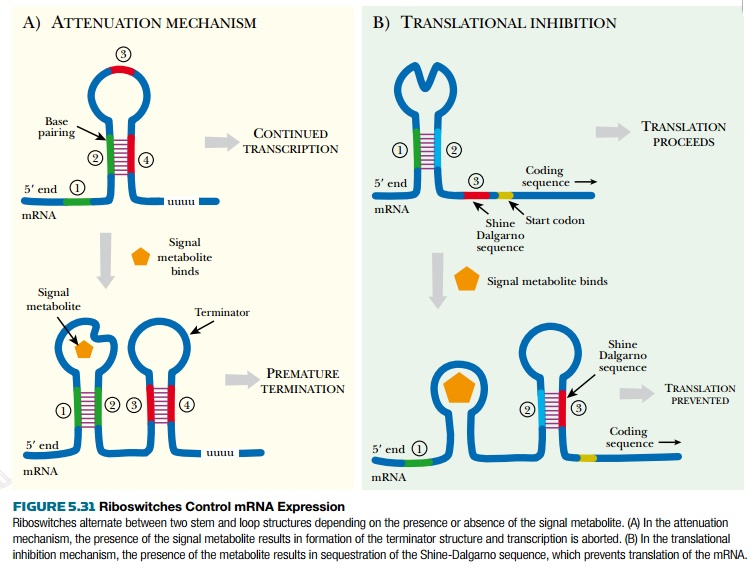 Recently, a novel riboswitch was identified in Bacillus subtilis that controls the expression of a biosynthetic gene (glmS) for a cell wall component (Fig. 5.32). As for other riboswitches, a product of the biosynthetic pathway controls whether or not the mRNA is expressed.

However, instead of hiding the Shine-Dalgarno sequence or creating a terminator loop, the change in RNA secondary structure creates a self-cleaving ribozyme. The glmS gene of B. subtilis codes for the enzyme glutamine fructose 6-phosphate amidotransferase, which converts fructose 6-phosphate plus glutamine into glucosamine 6-phosphate (GlcN6P). This is further converted into a component of the cell wall, UDP-GlcNAc. When this is abundant, it binds to glmS mRNA, altering the secondary structure. The new structure functions as a ribozyme that cuts the mRNA, preventing any further translation.

Other riboswitches have been identified that respond directly to thermal stress. For example, the rpoH gene of E. coli is involved in the heat shock response. In addition to other forms of regulation, the mRNA contains a thermosensor domain, which controls the amount of translation. At normal temperatures, the thermosensor has a stem-loop structure that prevents translation. When the heat increases, the stem-loop structure falls apart and translation can occur. 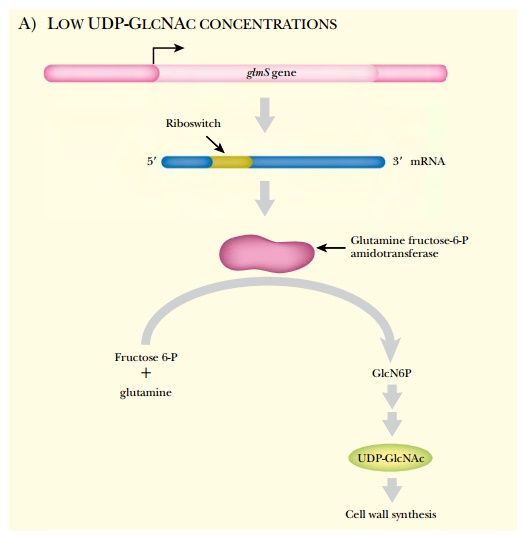 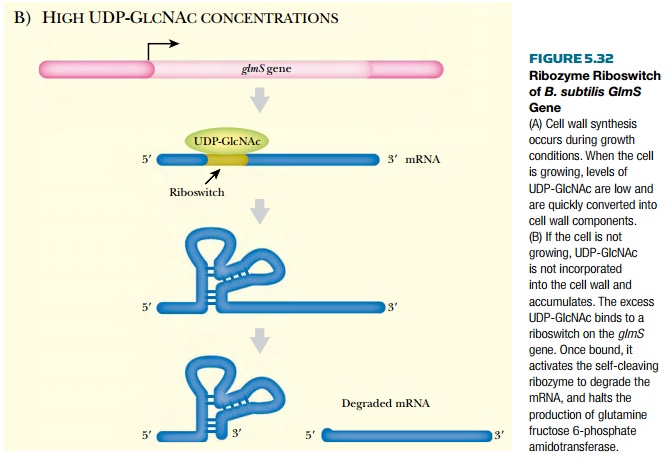