Ribozymes are RNA molecules that bind to specific targets and catalyze enzymatic reactions. Some ribozymes consist of RNA associated with proteins, but the RNA catalyzes the actual reaction.

Ribozymes are RNA molecules that bind to specific targets and catalyze enzymatic reactions. Some ribozymes consist of RNA associated with proteins, but the RNA catalyzes the actual reaction. Some ribozymes work like allosteric enzymes, that is, binding an effector molecule alters the ribozyme structure so that the ribozyme becomes competent to cleave its substrate. Ribozymes are naturally occurring, but biotechnology research has started to exploit their unique characteristics for medical and industrial applications.

There are eight known classes of ribozymes at present, with the distinct possibility that many more will be identified. Ribozymes are classified into large or small. The large ones range in size from several hundred nucleotides to 3000 nucleotides in length. Large ribozymes were the first identified, and the first of these were the group I introns of Tetrahymena. These are intron sequences found in pre-mRNA that are able to self-splice. They do not use splicing factors such as U1, U2, U4/U6 snRNA (aka snurps). Group I introns are common in fungal and plant mitochondria, in nuclear rRNA genes, in chloroplast DNA, in bacteriophage and eukaryotic viruses, and in the tRNA of chloroplasts and eubacteria. The important aspect of intron self-cleavage is the RNA structure. RNA is a linear polymer, but because of base-pairing between different regions, RNA also has a secondary structure. Multiple stem-loop structures fold into different configurations leading to a three-dimensional structure much like a protein (Fig. 5.20). The example shown is the second group I intron within the orf142 gene of bacteriophage Twort, which infects Staphylococcus aureus. The three-dimensional structure of group I introns brings the two exons close together, facilitating removal of the intron between them (Fig. 5.21). 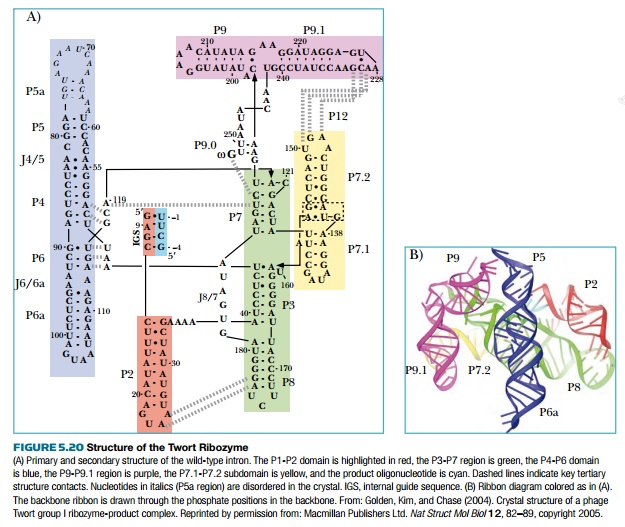 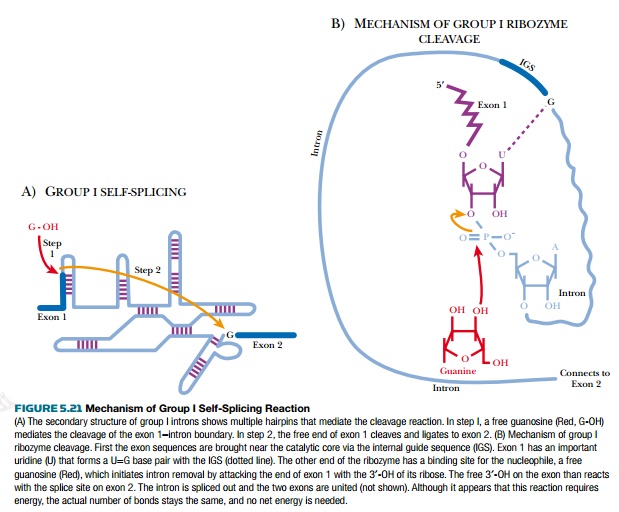 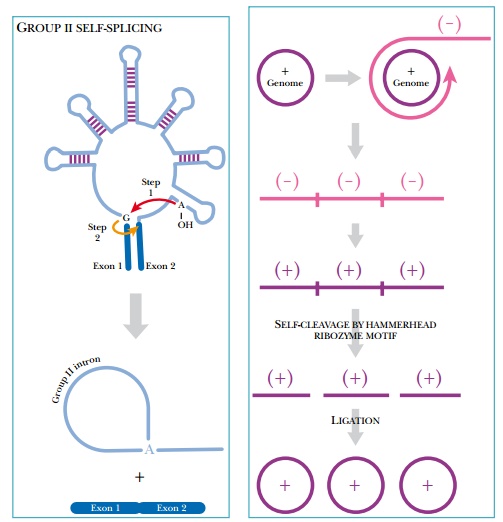 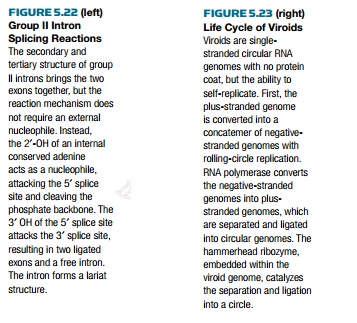 Group II introns are also self-splicing sequences found within genes. They are less common than group I introns, being found only in fungal and plant mitochondria, in plant chloroplasts, in algae, in eubacteria, and in chloroplasts of Euglena gracilis. These introns do not self-splice in vitro and require far from physiological conditions to work. The three-dimensional structure of the intron creates these abnormal conditions in vivo, affecting the microenvironment to create the correct ionic concentrations. The 3D structure of group II introns brings the two exons together, facilitating intron removal and exon ligation (Fig. 5.22).

Another naturally occurring large ribozyme is RNase P from bacteria. This is an RNA-protein complex, but the RNA component is the catalytic entity. RNase P cleaves the 5′ end of pre-tRNA molecules. RNase P can act on multiple substrates, unlike the group I and group II introns that naturally act only on themselves.