Home | | Biotechnology Applying the Genetic Revolution | In Vitro Evolution and in Vitro Selection of Ribozymes
Posted On :  06.06.2017 09:42 pm

In Vitro Evolution and in Vitro Selection of Ribozymes

It is also possible to generate new ribozymes with novel enzymatic capabilities from large pools of random RNA sequences.

IN VITRO EVOLUTION AND IN VITRO SELECTION OF RIBOZYMES

It is also possible to generate new ribozymes with novel enzymatic capabilities from large pools of random RNA sequences. This is worthwhile because small natural ribozymes are mostly limited to cleavage and ligation reactions. Using in vitro selection allows new ribozyme reactions to be identified from random nucleotide sequences (Fig. 5.28).

For example, a ribozyme that catalyzes the ligation of a particular sequence can be identified. This approach begins by synthesizing a set of random oligonucleotide sequences. However, these represent the pool of potential ribozymes rather than substrates as seen in RNA SELEX. Each random sequence is flanked by two known sequences. The 5′ end sequence is one substrate for the desired ligation reaction. The 5′ end also has a terminal triphosphate to energize ligation. The 3′ end has a sequence domain that binds a chosen effector molecule. This allows the enzyme reaction to be regulated. In addition, knowing the sequence at the two ends allows amplification of the total construct by PCR. 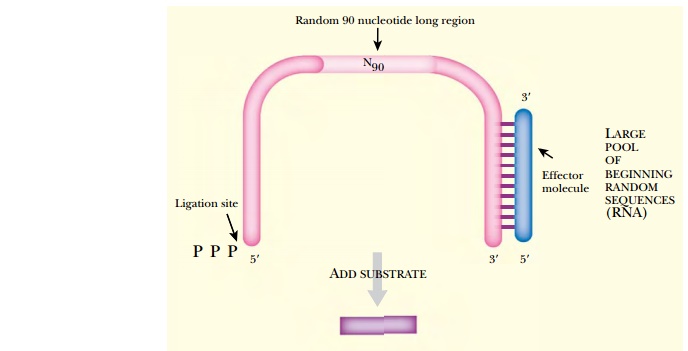 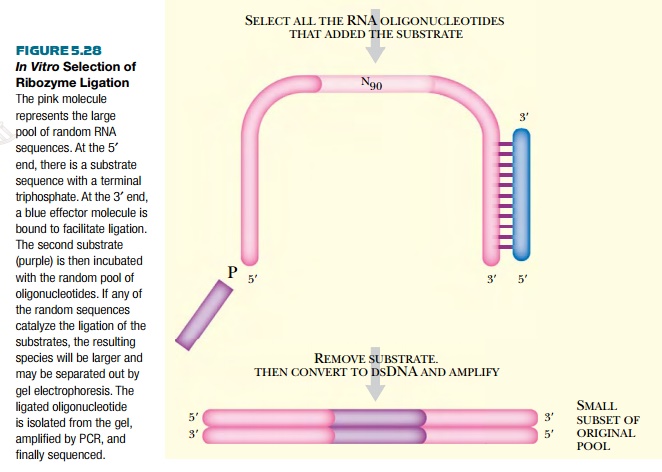 The other substrate for ligation is mixed with the potential ribozymes and incubated in conditions that favor ligation. If one of the random potential ribozyme sequences ligates the substrate to its 5′ end, the resulting RNA molecule (i.e., ribozyme plus ligation product) will run more slowly on an agarose gel. The slower molecules are isolated from the gel. The ribozyme suspect is then converted to DNA with reverse transcriptase. Finally, the DNA is amplified with PCR using primers that match the 5′ end and 3′ end of the original RNA constructs.

In vitro evolution enhances in vitro selection by adding a mutagenesis step after each cycle of selection (Fig. 5.29). This method begins with a pool of random oligonucleotides, as before. 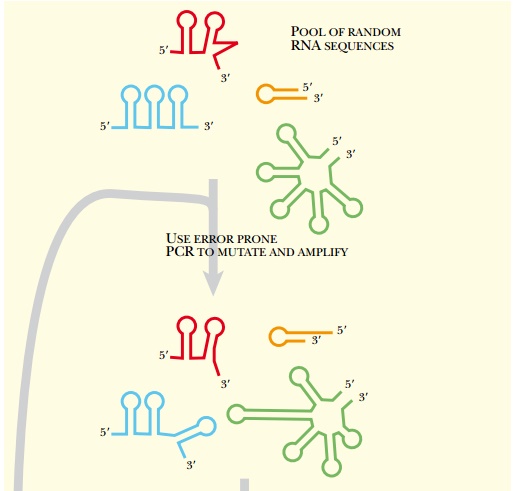 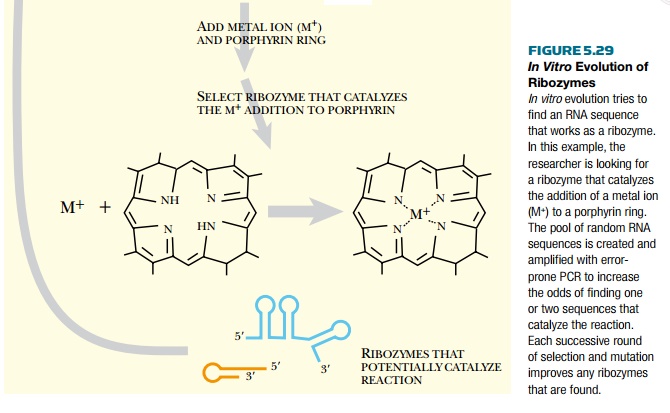 These sequences may be of any length, provided they are long enough to carry out the desired reaction. The pool of random sequences is then mutagenized. The most efficient method is to use error-prone PCR  to amplify the initial pool of sequences. The pool both becomes larger and gains even more different sequences. The next step selects for the specific sequence that carries out the desired reaction. For example, artificial ribozymes have been evolved to add metal ions to mesoporphyrin IX (see Fig. 5.29). The mutagenesis and selection steps can be repeated over and over to improve the ribozyme. Once an efficient ribozyme is obtained, the sequence is determined after converting the RNA into cDNA.

Artificial ribozymes have been made to carry out nucleophilic attacks at various centers, including phosphoryl, carbonyl, and alkyl halides. There is also an artificial ribozyme that can isomerize a 10-member ring structure. In each of these cases, the initial pools of oligonucleotides or ribozymes were selected for the ability to carry out the specific reaction. In both in vitro selection and in vitro evolution, the key to success is the selection step. It must be stringent enough that most of the nonfunctional RNA molecules are eliminated, but not so stringent that ribozymes with weak activity are eliminated too early.