Natural ribozymes normally act on only one specific substrate. Moreover, natural ribozymes are often degraded and so do not normally process more than one substrate molecule. An exception is RNase P, which can catalyze multiple cleavages of different tRNA molecules. One goal of biotechnology is to increase the number of substrates for the known ribozymes.

To identify new potential substrates for existing ribozymes, a procedure called RNA SELEX can be used. SELEX (Systematic Evolution of Ligands by EXponential enrichment) isolates new substrates for existing enzymes from a large (1015) population of random-sequence oligonucleotides (Fig. 5.27). First, the mixture of random oligonucleotides is chemically synthesized as single-stranded DNA. To make the RNA, the random oligonucleotides are converted into double-stranded DNA using a 5′ primer and Klenow polymerase. The 5′ primer contains the promoter sequence for T7 RNA polymerase, which is added to the pool of dsDNA to make multiple single-stranded RNA copies. The ribozyme of interest is then mixed with this large pool of ssRNA oligonucleotides, and those RNA molecules that bind to the ribozyme are isolated. In order to facilitate isolation, the ribozyme can be immobilized on beads or linked to biotin. The binding sequences can be directly identified, or they can be pooled and put through repeated cycles of selection, thus eliminating those that bound nonspecifically. In order to identify the new binding substrate, the RNA must be released from the ribozyme. It is then converted into cDNA using a 3′ primer and reverse transcriptase.

Because the actual number of specific binding molecules is low, these are amplified using PCR before sequencing.

The use of SELEX extends beyond ribozymes. It can be applied to drug design and delivery. The process can be applied to finding DNA binding substrates for different enzymes. In DNA SELEX, the initial pool of random-sequence oligonucleotides is not converted to mRNA with RNA polymerase. Instead, the oligonucleotides are used directly in substrate binding and selection. 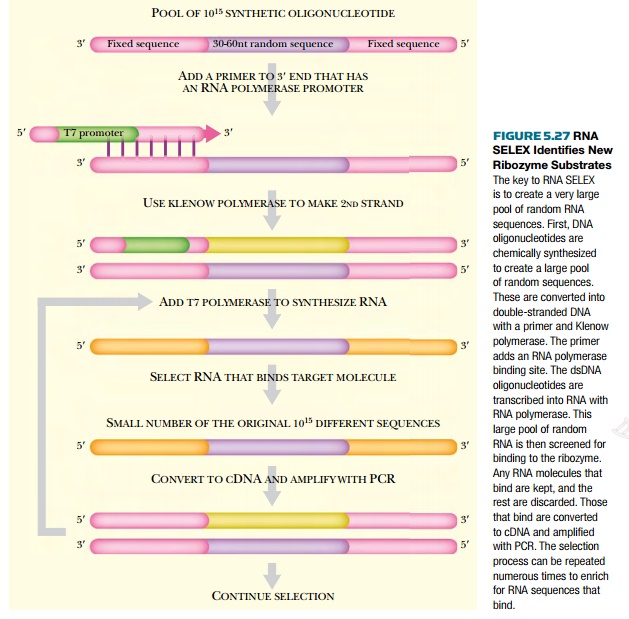