Engineered ribozymes are used to suppress the expression of genes, especially those that promote growth of cancers or those from pathogenic viruses such as human immunodeficiency virus (HIV).

Engineered ribozymes are used to suppress the expression of genes, especially those that promote growth of cancers or those from pathogenic viruses such as human immunodeficiency virus (HIV). To engineer such a molecule, a ribozyme catalytic core is combined with a region that recognizes the target gene. Often the target gene is recognized through antisense technology, thus combining the two strategies (Fig. 5.25). First, an appropriate region on the target mRNA is identified. The region must be relatively free of secondary structure and have no protein binding sites. Next, antisense RNA is synthesized to match the target mRNA. The antisense sequence is split, so that the 5′ half is in front of the ribozyme catalytic core, and the 3′ half is behind. When this chimeric ribozyme is mixed with target mRNA, the antisense regions base-pair with the target and the ribozyme cleaves the target mRNA. The two halves of the target mRNA are further degraded by other enzymes. 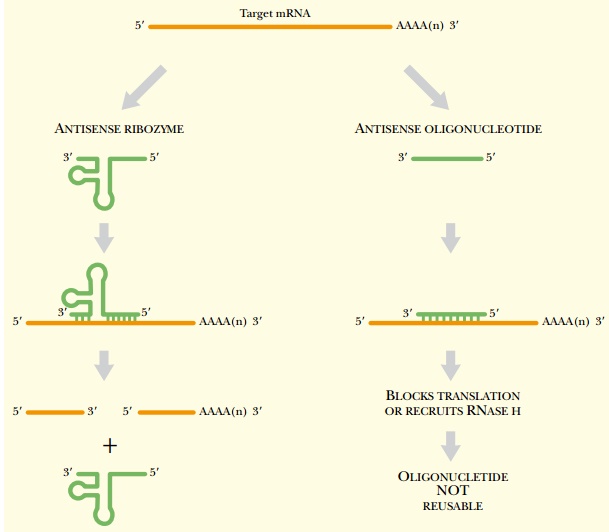 The engineered ribozyme can attack many target mRNA molecules because it is an enzyme, not merely an inhibitor. The addition of a ribozyme is much better than using antisense inhibition alone, because antisense constructs are degraded along with the target mRNA. 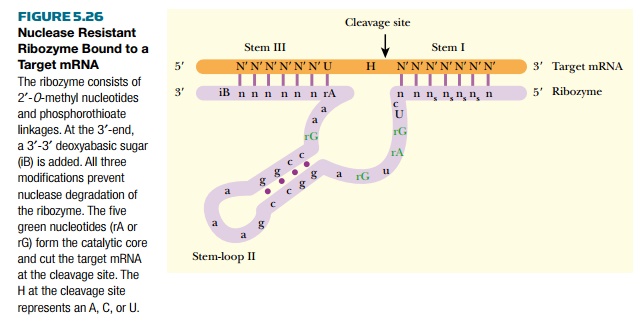 The ribozyme catalytic core used for the constructs just described is usually from either hairpin or hammerhead ribozymes (Fig. 5.26). Altering the ribozymes from group I introns, from group II introns, or from RNase P is difficult because of their large size and complex secondary and tertiary structure. Small ribozymes have a natural division between their catalytic centers and the sequences that specify their target. Thus, it is easy to manipulate the type of target the ribozyme will cleave. Hammerhead ribozymes have a lower propensity for ligation and are often used preferentially over hairpin ribozymes.