By inhibiting translation, RNAi provides the ability to remove a particular protein from an organism, without the need for genetic modification. RNAi thus provides a powerful tool to study the roles that particular proteins play in development.

By inhibiting translation, RNAi provides the ability to remove a particular protein from an organism, without the need for genetic modification. RNAi thus provides a powerful tool to study the roles that particular proteins play in development. The application of RNAi to studying C. elegans is especially well understood. Three different methods have been devised to get dsRNA constructs into C. elegans, and stimulate RNAi to block expression of a target gene (Fig. 5.14). The little worm has an uncanny ability to take up exogenous DNA or RNA. Worms can be fed Escherichia coli bacteria expressing the dsRNA of interest, and the worm takes up the dsRNA into its cells. Dicer then cleaves the dsRNA into small siRNAs that activate RISC to block the target mRNA. Another method to deliver dsRNA is simply bathing the worms in a solution of dsRNA. The exogenous dsRNA is absorbed into the worm, where it activates RNAi. A third method to induce RNAi is to inject worm eggs with dsRNA. The worm develops with the dsRNA inside, and RNAi is activated in all the cells. Bathing worms in dsRNA or feeding them dsRNA-expressing bacteria may be incomplete—some cells are not penetrated—yet because the signal can spread from one cell to the next, the method works. Surprisingly, the RNAi effect can pass from parent to offspring. The progeny of a worm that has a silenced gene will also silence the same gene. 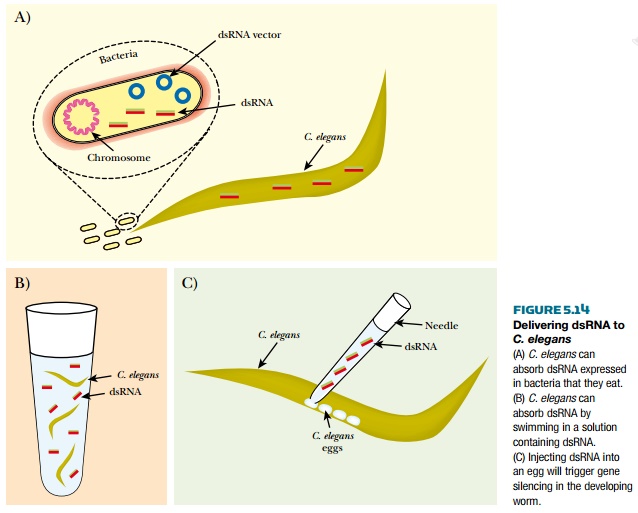 Delivering dsRNA to Drosophila is not quite as easy. The flies do not take up external dsRNA by eating it or absorbing it from solution. Drosophila requires the dsRNA to be microinjected directly into a developing egg. The dsRNA is absorbed into the cells as the embryo develops. The advantage of this method is the ability to knock out the protein of interest through all stages of development. Obviously, if the protein is essential for development, activating RNAi too early can stop development and kill the fly. Luckily, Drosophila has a feature not found in C. elegans. Fly cells can be cultured in vitro in nutrient medium. Because dsRNA can be transfected into the cultured cells, these cell lines can be used to study protein function using RNAi. Therefore, if RNAi kills the embryo during development, the corresponding protein can still be examined using cultured cell lines.