Getting antisense oligonucleotides into cells requires special techniques, because they do not cross cell membranes easily enough on their own to be effective. 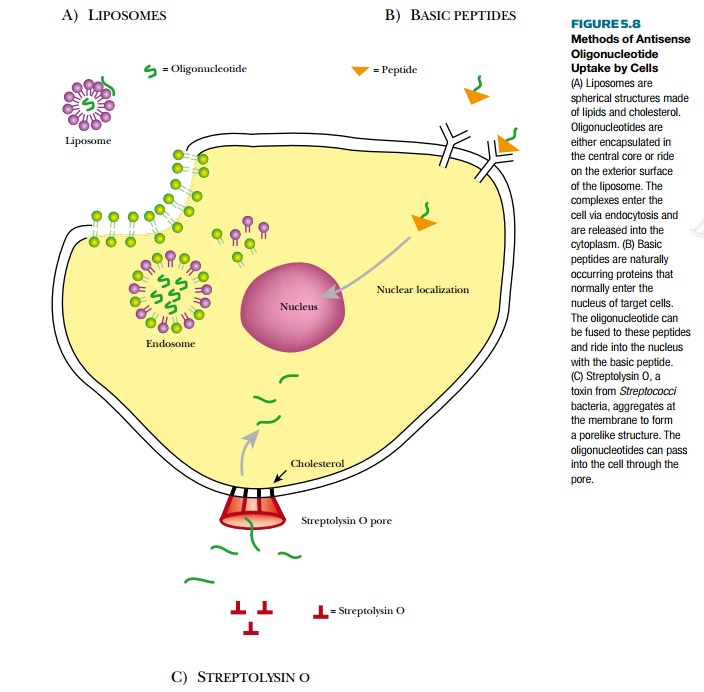 liposome, oligonucleotides and all, is engulfed by endocytosis. Some liposomes contain “helper” molecules that make the endosomal membrane unstable and release the liposome directly into the cytoplasm. Other delivery “vehicles” are cationic polymers, which include poly-L-lysine and polyethyleneimine. These operate via electrostatic interactions as discussed earlier, but they are toxic when taken into the cell; therefore, they are not used very often. 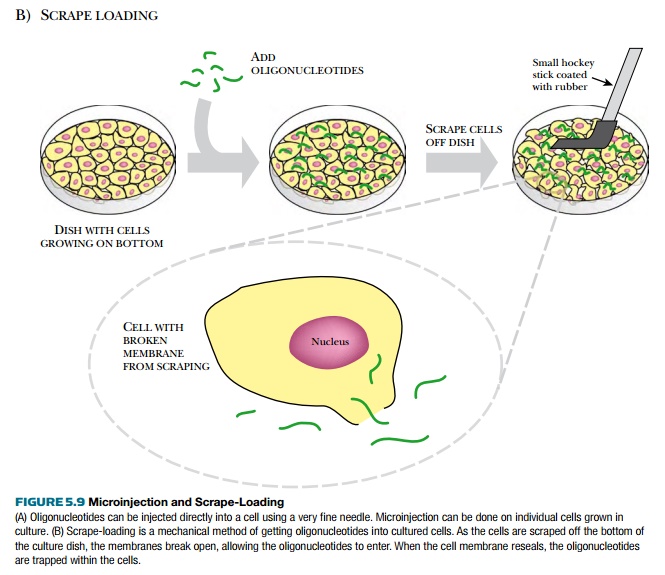 Other methods to get oligonucleotides into the cells require chemically or manually disrupting the membrane (see Fig. 5.8). Membrane pores can be generated by streptolysin O permeabilization (see Fig. 5.8C) or electroporation. Streptolysin O is a toxin from Streptococci bacteria that aggregates after binding to cholesterol in the membrane, forming a pore. The oligonucleotide passes through the pore and enters the cytoplasm directly. Antisense oligonucleotides can also be microinjected directly into each cell, but this method cannot be used for treating patients and is only useful for small-scale experiments on cultured cells (Fig. 5.9). Another mechanical method is called scrape-loading (see Fig. 5.9). Here, adherent cultured cells are gently scraped off the dish while the oligonucleotide bathes the cells. Removal of the cells probably creates small openings that allow the oligonucleotides to enter the cytoplasm.

Antisense oligonucleotides enter the target cell by endocytosis of oligonucleotide-filled liposomes, by rid-ing on basic peptides that normally enter the nucleus, by passing through pores created by streptolysin O, or by mechanical shearing.