RNAi has been used to study the entire genome in model organisms. An RNAi library containing about 86% of the predicted genes in the genome of C. elegans has been constructed in E. coli.

RNAi has been used to study the entire genome in model organisms. An RNAi library containing about 86% of the predicted genes in the genome of C. elegans has been constructed in E. coli. An RNAi library expresses each of the genes as dsRNA. E. coli carrying any particular gene can be used to feed C. elegans, which triggers RNAi for the gene of interest and allows the effect of removing each individual protein from the worm to be assayed. Using this library, more than 900 genes have been identified whose suppression kills the embryo or causes gross developmental defects. Most of the proteins encoded by the RNAi library target mRNA that had no known function before. These libraries demonstrate how RNAi can link a particular gene to a specific cellular process. Similar experiments in Drosophila have begun. An RNAi library of about 7200 conserved genes (about 91% of the predicted genes in the genome) has been constructed. So far the library has been used to identify proteins associated with cell growth and viability in Drosophila cell lines, but the library can be applied to many different processes.

In order to construct an RNAi library, the genes from the organism of interest are isolated as cDNA clones (Fig. 5.17). The cDNA clones are then amplified using PCR.

Because the genomes concerned have been sequenced, PCR primers that are specific for each gene are designed with special features. They are designed to add two different promoters at the ends of each gene. For example, the 3′ end would have a T7 polymerase promoter, and the 5′ end a T3 polymerase promoter. The PCR products are then cloned into a suitable vector. When the vector is present in a cell with both T7 and T3 RNA polymerase, both an antisense and a sense transcript are transcribed for each of the clones. The two strands spontaneously anneal to form dsRNA, which then activates RNAi.

For mammalian systems, RNAi libraries must be constructed with siRNAs or shRNAs rather than full-length dsRNA, because the full-length dsRNAs are toxic. These RNAi libraries are made by two different methods (Fig. 5.18). In the first method, short synthetic siRNAs are chemically synthesized for each of the genes that will be represented in the library. All of the siRNAs are pooled and cloned into the appropriate vector. The vector must have the promoters and terminators needed to express the siRNA inserts as double-stranded RNA. The promoters are usually two RNA polymerase promoters that transcribe the sense and antisense strands of the insert. As described earlier, these spontaneously anneal to make siRNA. The vector must also contain other appropriate sequences, such as an origin of replication for mammalian and bacterial cells, and antibiotic resistance genes for selecting cells carrying the vector.

A second approach to constructing a mammalian RNAi library involves the use of restriction enzymes to generate small shRNA fragments. Restriction enzyme-generated siRNA (REGS) libraries start with either single or multiple genes that are going to be represented in the library (see Fig. 5.18B). Whether a large or small sample of genes is used, the technique begins with double-stranded cDNAs. The library is cut with restriction enzymes that cut often and leave identical overhangs. This generates many different small fragments for each gene. Because each of the fragments is a different size, they must be trimmed to the same size. For this, the fragments are linked to a 3′ hairpin loop, which has a site for the restriction enzyme MmeI. This cuts precisely 20 nucleotides from the 3′ end of its recognition sequence, thus making each fragment the same length. 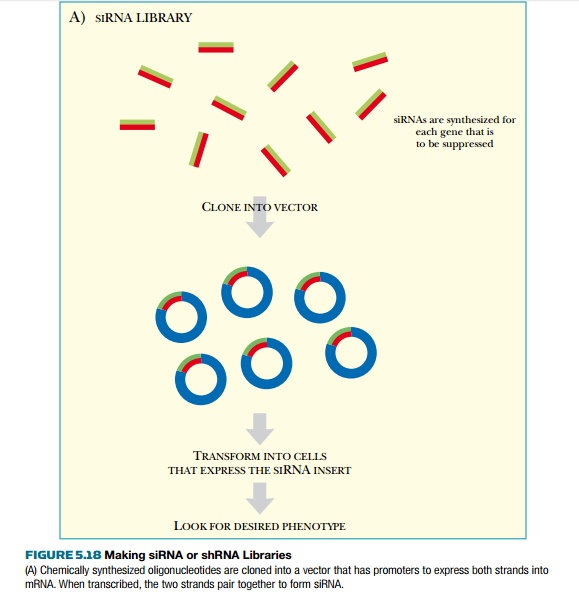 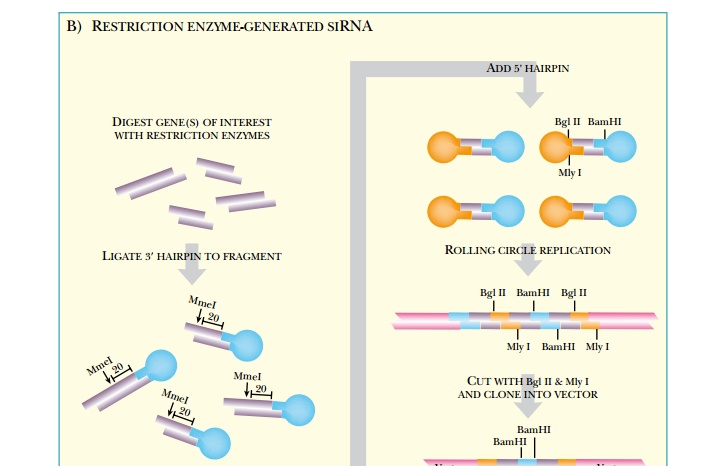 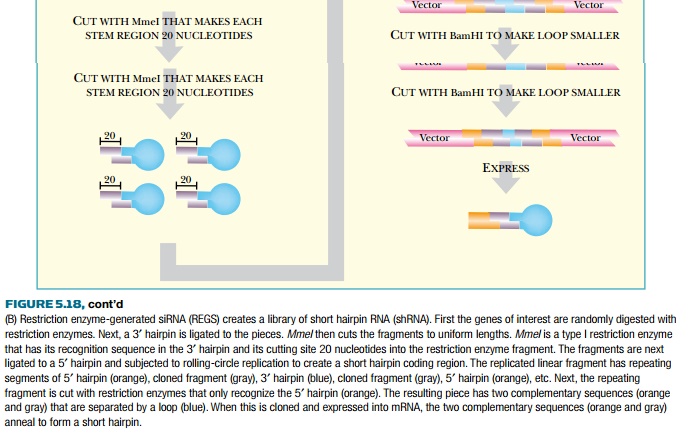 To make many siRNA copies of these random constructs, they are converted into double-stranded loops. First, a 5′ hairpin is ligated onto the end cut by MmeI. A viral DNA polymerase (from φ29) then converts the loop into dsDNA. This polymerase can separate the strands in double-stranded regions and so synthesizes a second strand for the entire circle. Since φ29 DNA polymerase displaces dsDNA, it continues to circle around and around making a long concatemer for each loop, as in rolling circle replication. The concatemer is digested with BglII and MlyI, to generate two complementary gene fragments connected by the 3′ loop. The 3′ loop is shortened by digestion with BamHI, and then the two fragments are ligated together. The final product is cloned into a vector that will transcribe the insert as a single strand of RNA. Finally, the two complementary sequences base-pair to form a short hairpin that is processed into siRNA by Dicer.

The RNAi libraries can be analyzed either with multiwell plates or live cell microarrays (Fig. 5.19). The multiwell plates use a barcode sequence on the shRNA in order to identify which clone corresponds to which gene. A barcode or zipcode sequence is approximately 20 nucleotides long and is unique to each clone. Each clone can be identified by this sequence rather than sequencing the entire gene insert. To analyze the library, it is transformed into a large number of cells that are inoculated into the wells of a multiwell plate. A defined number of

cells go into each well, so that only one siRNA is found in each well. The cells are then analyzed for any noticeable symptoms. For those showing effects, the siRNA is identified by the zipcode sequence. Another method for screening a siRNA or shRNA library is to spot each clone onto slides in a microarray. Live cells are then added and take up the siRNA or shRNA at these locations. The change in cell phenotype over a spot corresponds to a particular siRNA. 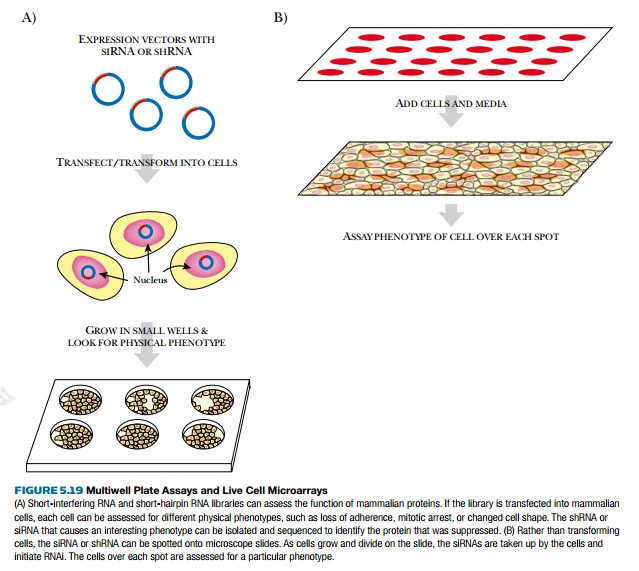 If each protein in a genome is studied for detectable phenotypes via RNAi, a phenotype catalogue can be constructed. For example, many genes/proteins involved with cell membrane division will arrest cells with a bridge structure during cell division. An unknown protein that causes the same phenotype in an RNAi screen would potentially belong to the same family of proteins. These proteins are said to have the same phenotypic signature. Databases have already been devised for C. elegans (http://nematode.bio.nyu.edu:8001) and Drosophila (http:// www.flyRNAi.org) where this type of information is compiled to share with other scientists.