The world is full of infectious microorganisms, all looking for a suitable host to infect. Bacteria, viruses, and protozoans are constantly attempting to gain entry into our tissues.

The world is full of infectious microorganisms, all looking for a suitable host to infect. Bacteria, viruses, and protozoans are constantly attempting to gain entry into our tissues. If nothing was done about these attempts at invasion, no human could survive. Fortunately, cells of the immune system patrol the internal tissues, the bloodstream, and the body surfaces, both outside and inside, protecting the entire organism from attack. Any foreign macromolecules that are not recognized as being “self” will be regarded as signs of an intrusion and will trigger an immune response. Invading microorganisms have their own distinctive proteins, which differ in sequence and therefore in 3-D structure from those of the host animal. In particular, those molecules exposed on the surfaces of invading microorganisms will attract the attention of the immune system. These foreign molecules are referred to as antigens, and the immune system molecules that recognize and bind to them are known as antibodies (Fig. 6.1). 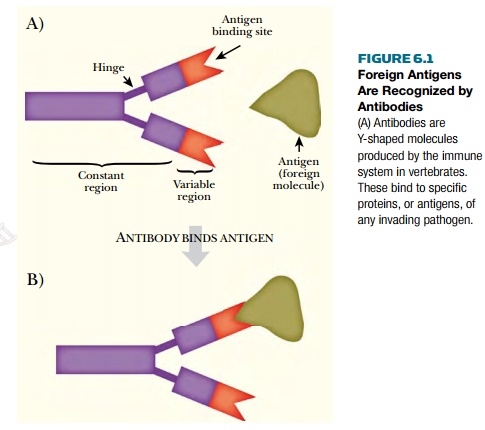 Although we often speak as if the body makes antibodies in response to invasion by a foreign antigen, this is rather misleading. In fact, long before infection, the immune system generates billions of different antibodies. Each B cell of the immune system has the capability to make just one of these. The immune system keeps a few B cells on standby for each of its colossal repertoire of antibodies. This happens before encountering the antigens and without knowing which antibodies will actually be needed later. If enough different antibodies are available, at least one or two should match an antigen of any conceivable shape, even if the body has never come into contact with it before. 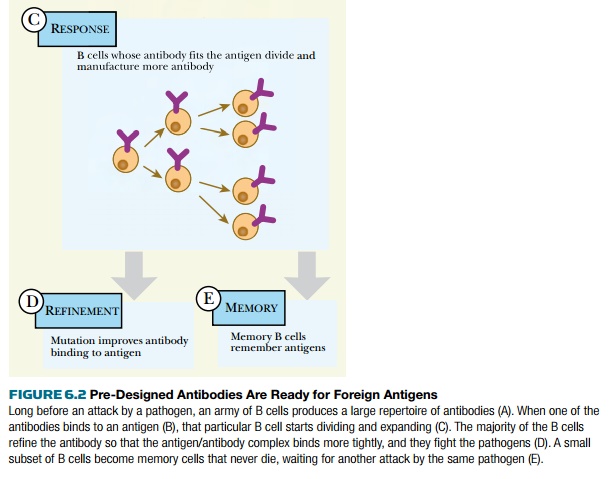 Eventually, a foreign antigen appears (Fig. 6.2). Among the billions of predesigned antibodies, at least one or two will fit the antigen reasonably well. Those B cells that make antibodies that recognize the antigen now divide rapidly and go into mass production. Thus the antigen determines which antibody is amplified and produced. Once a matching antibody has bound invading antigens, the immune system brings other mechanisms into play to destroy the invaders.

Sometime later there is a stage of refinement during which those antibodies that bound to the invading antigen are modified by mutation to fit the antigen better. In addition, the immune system keeps a record of antibodies that are actually used. If the same invader ever returns, the corresponding antibodies can be rushed into action, faster and in greater numbers than before. Vaccines exploit this capacity by stimulating the immune system to store the antibodies that recognize and destroy a pathogenic virus such as smallpox. Yet the vaccines cause no disease symptoms themselves (see later discussion).