As explained in the last section, fluorescent antibodies are used to find the location of intracellular proteins. Fluorescent antibodies are also able to bind to surface antigens. Many cells of the immune system have specific antigens on their surface that distinguish them from others. Each immune cell can have over 100,000 antigen molecules on their surface. These surface antigens characterize the different types of immune cells and are systematically named by assigning them a cluster of differentiation (CD) antigen number. The antigens were mostly identified before their physiological function was known. For example, CD4 antigens are associated with T-helper cells, and CD8 with killer T cells. Monoclonal antibodies are available to label many CD antigens, especially the most common.

Fluorescence activated cell sorting (FACS) involves the mechanical separation of a mixture of cells into different tubes based on their surface antigens (Fig. 6.18). Because the antibody attaches to the outside of the cell, the cell does not have to be prepared like above. In this example, helper T cells and killer T cells can be separated from other white blood cells based on the presence of CD4 or CD8 surface antigens. First, the cell suspension is labeled with monoclonal antibodies 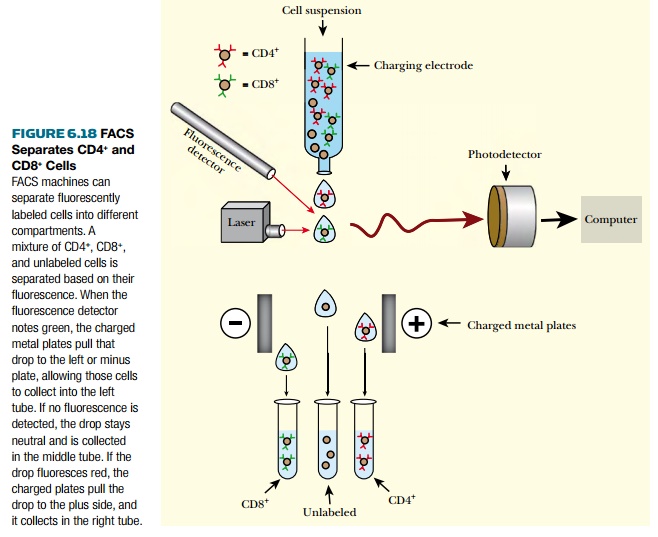 to the surface antigens of interest. In this example, antibodies to CD4 and CD8 are used. Both antibodies have fluorescent labels that are different for the two antibodies. The labeled cell suspension is loaded into a charging electrode. Drops of liquid containing only one cell are released to the bottom, and the fluorescence detector notes whether or not the drop of liquid is labeled for CD4 or CD8 by the color of its fluorescence. If the drop has an antigen, an electrical charger pulls or pushes the droplet to the right or left, separating the two antigens into separate tubes. If the drop has no antigen in it, it gets no electrical charge and goes into a third tube. Usually two different antibodies are used, but some of the newer FACS machines can sort up to 12 different fluorescently labeled antibodies and can sort up to 300,000 cells per minute.

Flow cytometry is a related technique to analyze fluorescently labeled cells. As with FACS, cells are labeled with monoclonal antibodies to cell-surface antigens. The antibodies are conjugated to a variety of different fluorescent labels, and each antibody is detected based on its fluorescence.

The cells are loaded into a charging electrode and released in small droplets. During flow cytometry, the cells are not sorted and saved; instead the sample of cells is measured and discarded. As the cells pass the detector, the computer records the fluorescence and plots the number of cells with each of the fluorescent labels. These are plotted with a small dot representing each of the cells (Fig. 6.19). 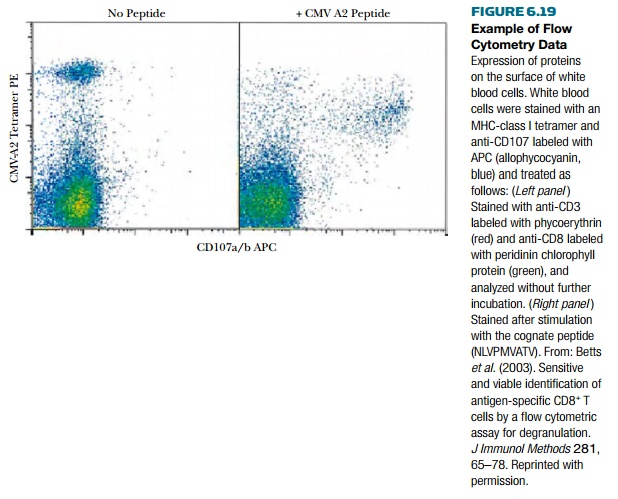