The term antigen refers to any foreign molecule that provokes a response by the immune system. In practice, most antigens are proteins made by invading bacteria or viruses.

The term antigen refers to any foreign molecule that provokes a response by the immune system. In practice, most antigens are proteins made by invading bacteria or viruses. In particular, glycoproteins, which carry carbohydrate residues, and lipoproteins, which carry lipid residues, generate strong immune responses, that is, they are highly antigenic. Other macromolecules can also work as antigens. Polysaccharides are often found as surface components of infiltrating germs and may act as antigens. Even DNA can be antigenic under certain circumstances. 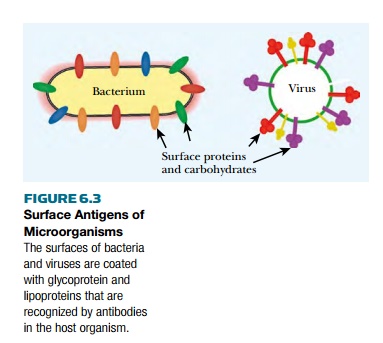 Not surprisingly, the antigens exposed on the surface of an alien microorganism will usually be detected first by the immune system (Fig. 6.3). Later in infection, Virus especially after the cells of some invaders have been disrupted by the immune system, molecules from the interior of the infectious agent may be liberated and also act as antigens. 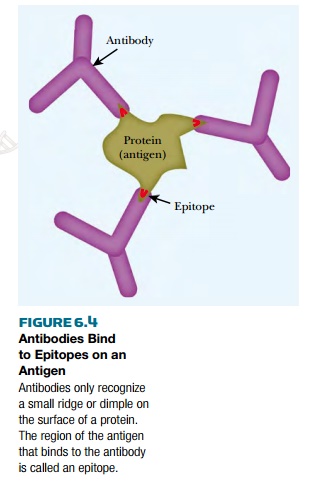 The immune system mediates immunity to various infectious agents through specific immunity or acquired immunity. Acquired immunity can be subdivided into humoral immunity and cell-mediated immunity. Humoral immunity is mediated by antibodies, or immunoglobulins, in the blood plasma, which are produced by B cells. Cell-mediated immunity is mediated by antigen-specific cells called T lymphocytes, which are divided into TH or T helper cells, and TC or T cytotoxic cells. Antibodies generally bind to whole proteins, whereas T cell receptors bind to fragments of protein. When an antibody binds to a protein, it recognizes a relatively small area on the surface of the protein, such as dimples or projections sticking out from the surface. Such recognition sites are known as epitopes (Fig. 6.4). Because intact proteins are large molecules, they may have several epitopes on their surfaces. Consequently, several different antibodies may be able to bind the same protein, although not usually simultaneously, because antibodies are themselves large molecules.

T cells work in the same manner but recognize only antigens expressed on the surface of other body cells, particularly macrophages, cells infected with a virus, or antibody-making B cells, as opposed to the microorganism itself. T cells recognize these other cells via cell surface receptor proteins called the class I and class II major histocompatibility complexes (class I and class II MHCs). Class I MHCs activate TH cells, and class II MHCs activate TC cells. MHC receptors are encoded by a family of genes that are different for every person. These may be used to distinguish people, and must be matched in organ transplantation to prevent rejection. Another name for the MHC receptors are human leukocyte antigens (HLAs).