Natural antibodies consist of an antigen binding site joined to an effector region that is responsible for activating complement and or binding to immune cells.

Natural antibodies consist of an antigen binding site joined to an effector region that is responsible for activating complement and or binding to immune cells. From a biotechnological viewpoint, the incredibly high specificity with which antibodies bind to a target protein is useful for a variety of purposes. Consequently, antibody engineering uses the antigen binding region of the antibody. These are manipulated and are attached to other molecular fragments.

To separate an antigen binding site from the rest of the antibody, gene segments encoding portions of antibody chains are subcloned and expressed in bacterial cells. Bacterial signal sequences are added to the N terminus of the partial antibody chains, which results in export of the chains into the periplasmic space. Here the VH and VL domains fold up correctly and form their disulfide bonds. The antibody fragments used include Fab, Fv, and single-chain Fv (scFv) (Fig. 6.12). In a Fab fragment, an interchain disulfide bond holds the two chains together. However, the Fv fragment lacks this region of the antibody chains and thus is less stable. This led to development of the single-chain Fv fragment in which the VH and VL domains are linked together by a short peptide chain, usually 15 to 20 amino acids long. This is introduced at the genetic level so that a single artificial gene expresses the whole structure (VH-linker-VL or VL-linker-VH). A tag sequence (such as a His6-tag or FLAG-tag) is often added to the end to allow detection and purification. Such an scFv fragment is quite small, about 25,000 in molecular weight.

Such scFv fragments are attached to various other molecules by genetic engineering. The role of the scFv fragment is to recognize some target molecule, perhaps a protein expressed only on the surface of a virus-infected cell or a cancer cell. A variety of toxins, cytokines, or enzymes may be attached to the other end of the scFv fragment, to provide the active portion of the final recombinant antibody. In principle, this approach provides a way of delivering a therapeutic agent in an extremely specific manner. At present the clinical applications of engineered antibodies are under experimental investigation. 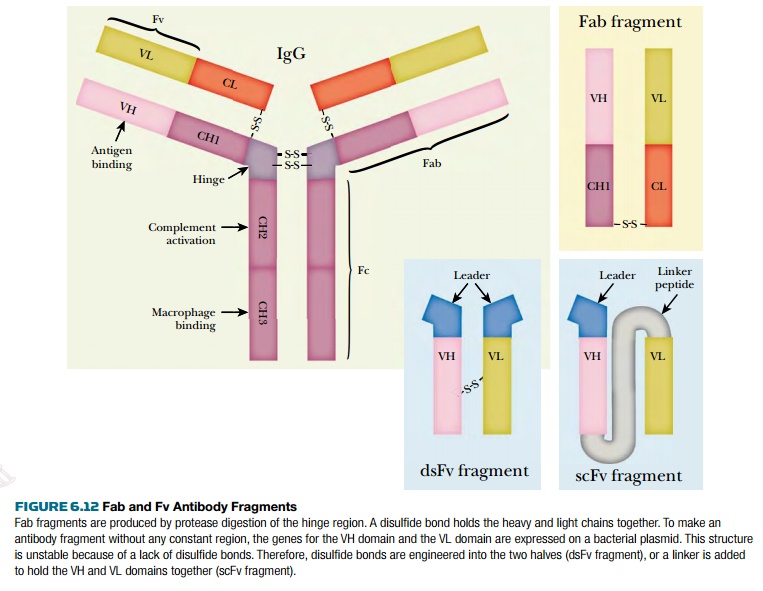 The antigen binding regions used in antibody engineering may be derived from characterized monoclonal antibodies. Alternatively, a library of DNA segments encoding V-regions may be obtained from a pool of B cells obtained from an animal or human blood sample. Such a library should in theory contain V-regions capable of recognizing any target molecule. Using a human source avoids the necessity for the complex humanization procedures described earlier. However, in this case it is necessary to screen the V-region library for an antibody fragment that binds to the desired target molecule. This may be done by the phage display procedure outlined. The library of V-region constructs is expressed on the surface of the phage, and the target molecule is attached to some solid support and used to screen out those phages carrying the required antibody V region.