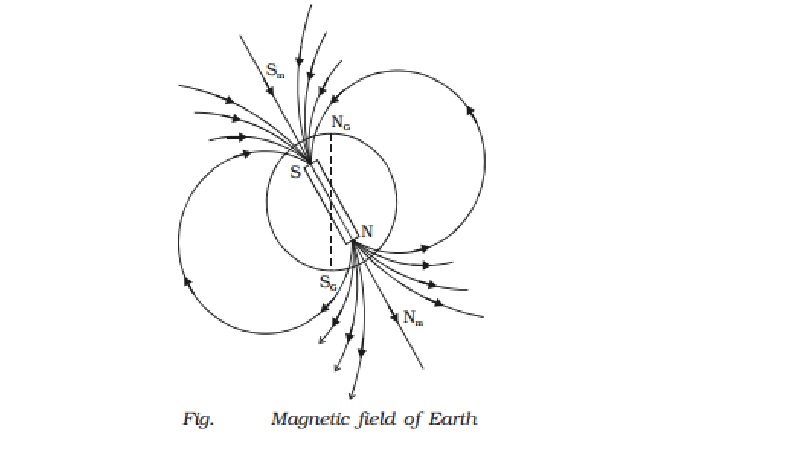 A freely suspended magnetic needle at a point on Earth comes to rest approximately along the geographical north - south direction. This shows that the Earth behaves like a huge magnetic dipole with its magnetic poles near its geographical poles.

The word magnetism is derived from iron ore magnetite (Fe3O4), which was found in the island of magnesia in Greece. It is believed that the Chinese had known the property of the magnet even in 2000 B.C. and they used magnetic compass needle for navigation in 1100 AD. But it was Gilbert who laid the foundation for magnetism and had suggested that Earth itself behaves as a giant bar magnet. The field at the surface of the Earth is approximately 10-4 T and the field extends upto a height of nearly five times the radius of the Earth. 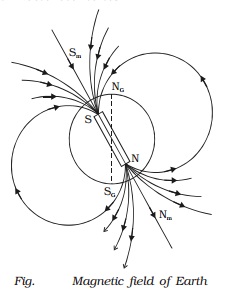 The Earth?s magnetic field at any point on the Earth can be completely defined in terms of certain quantities called magnetic elements of the Earth, namely

(i) Declination or the magnetic variation θ.

(ii) Dip or inclination δ and

Causes of the Earth?s magnetism

(i) Magnetic masses in the Earth.

(ii) Electric currents in the Earth.

(iii)Electric currents in the upper regions of the atmosphere.

However, it is believed that the Earth?s magnetic field is due to the molten charged metallic fluid inside the Earth?s surface with a core of radius about 3500 km compared to the Earth?s radius of 6400 km.

(vi)The force of attraction or repulsion between two magnetic poles is given by Coulomb?s inverse square law.

Note : In recent days, the concept of magnetic poles has been completely changed. The origin of magnetism is traced only due to the flow of current. But anyhow, we have retained the conventional idea of magnetic poles in this chapter. Pole strength is denoted by m and its unit is ampere metre.