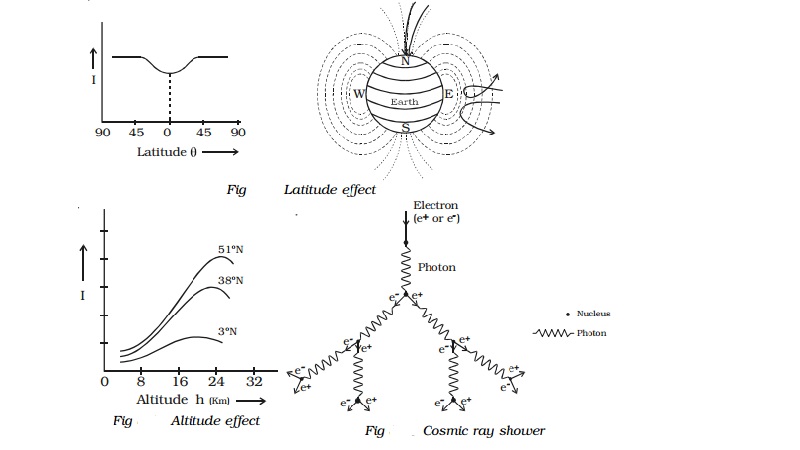 The study of cosmic rays started with gold leaf electroscope experiment. It was found that if a properly insulated and charged gold leaf electroscope is left to itself, the charge leaks gradually, which happened in all the places on the land, mines and sea. Ionising radiation coming from the outer space is the reason for leakage of charges.

The study of cosmic rays started with gold leaf electroscope experiment. It was found that if a properly insulated and charged gold leaf electroscope is left to itself, the charge leaks gradually, which happened in all the places on the land, mines and sea. Ionising radiation coming from the outer space is the reason for leakage of charges. The ionising radiation many times stronger than γ-rays entering the earth from all the directions from cosmic or interstellar space is known as cosmic rays. The name, cosmic rays was given by Millikan.

The secondary cosmic rays are produced when primary cosmic rays interact with gases in the upper layers of the atmosphere. They are made up of particles like α-particles, protons, electrons, positrons, mesons, photons, etc. in different proportions.

The decrease in cosmic ray intensity at the earth's equator is explained to be due to the earth's magnetic field. The charged particles approaching the earth near the poles travel almost along the direction of the magnetic lines of force. They experience no force and easily reach the surface of the earth and hence maximum intensity at poles. But the charged particles that approach at the equator have to travel in a perpendicular direction to the field and are deflected away. Only particles with sufficient energy can reach the equator, while the slow particles are deflected back into cosmos and hence minimum intensity at the equator.

The study of variation of cosmic ray  intensity  (I)  with  altitude  (h)  is known as  altitude  effect,  which  is represented in Fig 8.12. It is seen that  I the  intensity  increases  with  altitude and reaches a maximum at a height of about 20 km. Above this height there is a fall in intensity. The experimental results are similar at different places of the earth.

When a detecting device is used to study cosmic ray intensities, it is observed that the intensity rises momentarily to several times its normal value, which indicates sudden burst of radiation.

The cascade theory of cosmic ray shower shows that the shower production involves two processes, radiative collision and pair production (Fig. 8.13). An energetic electron or positron present in cosmic rays loses energy, when it collides with the nuclei of atoms in earth's atmosphere. This energy loss appears as high energy photon. This photon interacts with an atomic nucleus and produce an electron position pair. The electron and positron, so produced have sufficient energies to produce more photons on interaction with nuclei, which are further capable of bringing about pair production. The result is the generation of a large number of photons, electrons and positrons having a common origin like a shower and hence it is known as cosmic ray shower. Themul-tiplication will continue until the Initial energy becomesdivided and the individual Energy of the particles fall below the 'critical energy' when Photon emission and  pair produc-tion can no longer occur.

Pair production and annihilation of matter

The conversion of a photon into an electron−positron pair on its interaction with the strong electric field surrounding a nucleus is called pair production.

The converse of pair production in which an electron and positron combine to produce a photon is known as annihilation of matter.