Questions · What is the diagnosis? · How should this woman be managed?

PAIN AND FEVER IN PREGNANCY

A woman aged 26 years is referred by her general practitioner. She is 36 weeks’ gestation in her fourth pregnancy, having had one miscarriage and two term vaginal deliveries.

In this pregnancy she has been seen twice in the day assessment unit, the first time at 31 weeks for an episode of vaginal bleeding for which no cause was attributed. The second time was at 35 weeks after she awoke with damp bed sheets. No liquor had been detected on speculum examination at the time and she was discharged. For the last 2 days she has been feeling generally unwell with a fever, decreased appetite and a headache as well as abdominal discomfort. She reports the baby moving less than normal for the last few days, with approximately 8–10 movements per day.

She has not noticed any vaginal bleeding but her discharge has been more than normal and there is an offensive odour to it.

Her temperature is 37.8°C, blood pressure 106/68 mmHg and heart rate 109/min. On abdominal palpation symphysiofundal height is 34 cm and the fetus is cephalic with 3/5 palpable. There is generalized uterine tenderness and irritability. On speculum examina- tion the cervix is closed and a green/grey discharge is seen within the vagina. 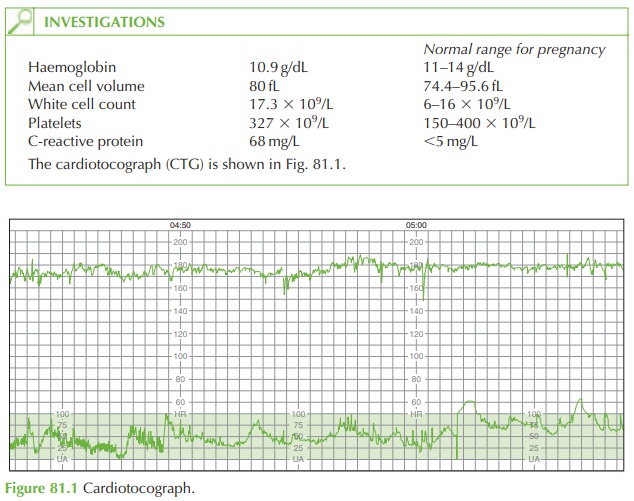 The diagnosis is of chorioamnionitis secondary to prolonged preterm rupture of mem- branes. Although spontaneous rupture of membranes was not confirmed at the previous attendance at 35 weeks, it seems probable that in fact this did occur at that time. Ascending organisms have thus colonized the uterus and resulted in infection. The result is a maternal systemic reaction causing her symptoms: tachycardia, tenderness, leuco- cytosis, and raised C-reactive protein.

The fetus is also affected as shown by the fetal tachycardia.

Chorioamnionitis is a significant cause of both fetal and maternal morbidity and mortal- ity, and should be treated as an obstetric emergency.

Management should be instigated immediately. Initial microbial specimens should be obtained from high vaginal swab and maternal blood cultures.

The baby needs delivery by induction of labour – women with chorioamnionitis often labour rapidly. Risks of Caesarean section in the presence of infection are significant in terms of bleeding, uterine atony and disseminated intravascular coagulopathy. However continuous CTG should be employed and immediate Caesarean section performed if it deteriorates.

Steroids (to prevent potential respiratory distress syndrome) are contraindicated in this woman as they may increase the severity of infection.

After delivery, the baby will need to be reviewed by the paediatrician and given a septic screen and course of intravenous antibiotics.