Questions · Describe and classify the CTG. · What are the possible causes for this CTG pattern? · What should be your subsequent management?

A midwife is concerned about a cardiotocograph (CTG) on the labour ward. The woman is 42 years old and had an elective Caesarean section 3 years ago for twins. After counselling, she decided to opt for a vaginal delivery in this pregnancy. She is now 38 weeks 1 day’s gestation and presented to the labour ward an hour ago. She was found to have contrac- tions, three in 10 min lasting 50 s each. There was no reported rupture of membranes.

At the time of arrival, examination revealed a symphysiofundal height of 39 cm, cephalic presentation and 3/5 palpable abdominally. Vaginal examination revealed intact mem- branes with the head 1 cm above the ischial spines, occipitoanterior position and the cervix 5 cm dilated.

She was commenced on continuous CTG monitoring (because of the previous Caesarean section), which showed an initial baseline rate of 135/min, good variability, accelerations and no decelerations. 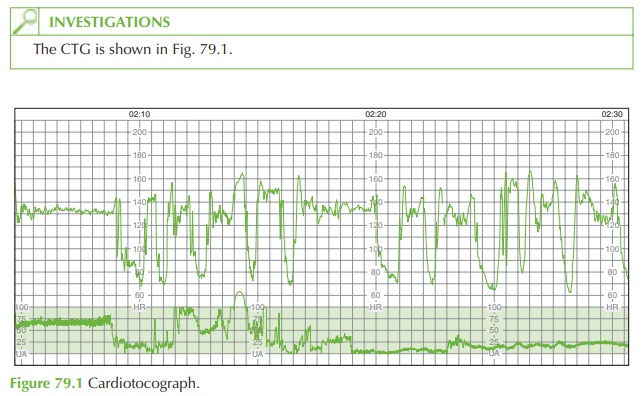 This CTG is unsatisfactory because the tocometer is not registering contractions.

The presence of variable decelerations with no other suspicious features leads to the clas- sification of this CTG as non-reassuring.

In this situation, the recent history of spontaneous rupture of membranes indicates imme- diate vaginal assessment to rule out cord prolapse as the cause of the suddenly abnormal CTG. This would be a classic presentation for cord prolapse, though the condition itself is very rare.

Much more commonly variable decelerations are caused by cord compression (by the uterine wall or, for example, by the fetal hand)

If, as is normally the case, the cord is not palpable and the baby is not easily deliverable by instrumental delivery, then further assessment of fetal wellbeing is required as the abnor- mality of the CTG has already lasted 20 min. This should be by fetal blood sampling (FBS).

In this case FBS gave the following result: pH: 7.23

With a pH between 7.20 and 7.25, it is reasonable to manage the woman expectantly and repeat the FBS in 30 min. This was done and the second result was:

At this stage the woman was fully dilated and pushing involuntarily, and the baby was delivered spontaneously soon after the sample was taken.

In this case the fetal blood pH was relatively reassuring despite the dramatic appearance of the CTG. It is possible to avoid Caesarean section in such cases with appropriate use of FBS. It should be remembered that FBS is contraindicated in certain conditions such as maternal HIV, hepatitis or potential fetal-bleeding disorders. 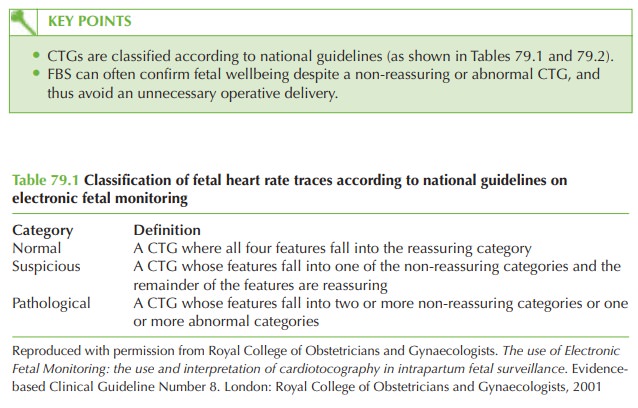 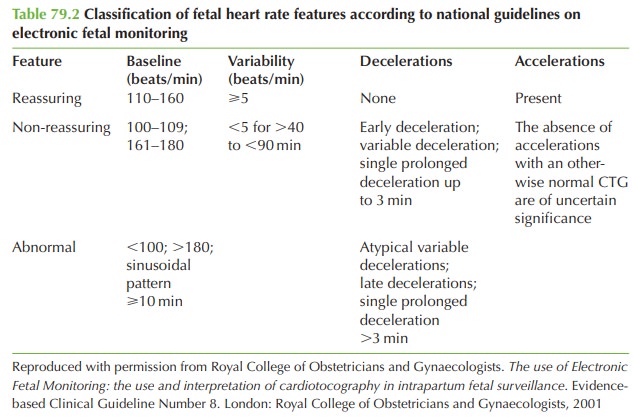