Questions · How do you interpret the examination and CTG findings? · What factors are associated with this pattern of labour? · How would you manage this woman?

A 36-year-old nulliparous woman at term started having uterine tightenings yesterday morning. These were intermittent initially and she managed to cope with a hot bath and paracetamol, but they have now become increasingly painful and frequent. This morning she came in because she had ruptured membranes at home an hour and a half ago. She has continued to notice normal fetal movements.

Since arrival the blood pressure, temperature and heart rate have been within the normal range and the liquor has remained clear. She has been examined several times and the findings of each examination are shown in Table 87.1. After the examination at 14.15 a syntocinon infusion was commenced. 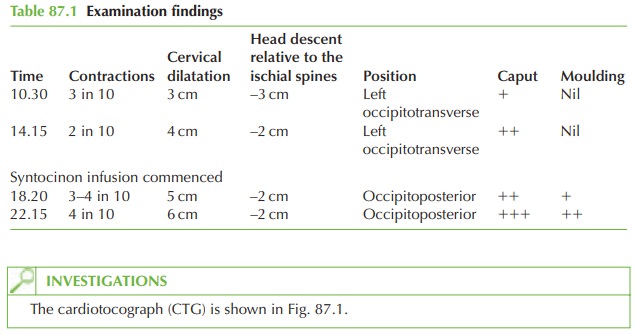 The examination findings show failure to progress in the first stage in labour. Once labour has been established, the cervix is expected to dilate at approximately 1 cm/h. In this case, despite attempted augmentation with an oxytocic (syntocinon), there has only been 3 cm dilatation in almost 12 h.

This situation is most common in nulliparous women and is termed primary dysfunctional labour. Other associations are malposition (commonly the occipitoposterior position) and increased fetal size (cephalopelvic disproportion).

Maximum contractions have been achieved (4 in 10 min) with the oxytocic for several hours, and there are increasing signs of obstruction (caput and moulding of the fetal head). In view of this the only management option available is to perform an emergency Caesarean section.

The CTG is normal, but without intervention, the likely scenario is for fetal compromise to occur. Therefore once the decision has been made to proceed with Caesarean section, oxy- tocin should be discontinued to reduce the effect of the prolonged contractions on the baby. Delivery should be arranged within 30 min of the decision being made.

The important points in arranging delivery by emergency Caesarean section in this case are: