Questions · What is the likely diagnosis? · How would you manage this patient? · What are the possible further complications in this patient?

A 31-year-old woman is admitted with contractions at 40 weeks’ gestation. This is her fourth pregnancy, having had two terminations approximately 10 years ago and an elect- ive Caesarean section for breech presentation 3 years ago.

During this pregnancy she has had an amniocentesis because of a high estimated risk for Down’s syndrome at 11–14-week scan. However a normal karyotype was found and subse- quent fetal echocardiography was normal. In view of her previous Caesarean section she was seen by the obstetric consultant in the antenatal clinic at 28 weeks to discuss mode of deliv- ery. After counselling, a plan was agreed for a vaginal delivery.

She was admitted with spontaneous rupture of membranes after which she had begun to contract irregularly. The contractions became stronger and more regular over the next 2 h after admission and she requested an epidural. Vaginal examination was performed and the cervix was found to be 4cm dilated. The head was in the occipito transverse position, 1 cm above the level of the ischial spines. There was a small amount of caput and moulding.

An epidural was sited and an indwelling urinary catheter inserted. Three hours later the woman reported more severe pain which did not disappear between contractions. At that time approximately 200mL of fresh blood was seen coming from the vagina.

The heart rate is 105/min and blood pressure 105/58 mmHg. The woman feels warm and well perfused. The abdomen is soft and the uterus is also soft but very tender, with easy palpation of fetal parts. On vaginal examination the cervix is 6 cm dilated and the fetal head feels high in the pelvis and poorly applied to the cervix. The catheter contains blood-stained urine. 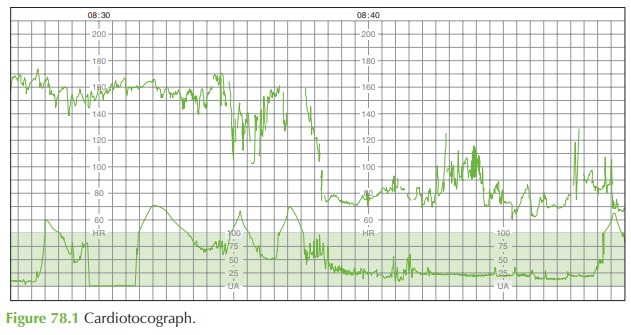 The emergency theatre team, senior obstetrician and paediatrician should be summoned and the woman transferred to theatre immediately for laparotomy, which may need to be under general anaesthetic as the epidural is unlikely to be adequate for laparotomy within a few minutes.

At laparotomy, the fetus should be delivered from the abdomen and the placenta removed. It may be possible to repair the uterine defect. However, if bleeding is substantial then other measures may need to be employed such as a B-Lynch haemostatic suture or even hysterectomy.

If the uterus is preserved, then any future pregnancies should be very closely monitored with elective delivery by Caesarean section at 37 weeks’ gestation. 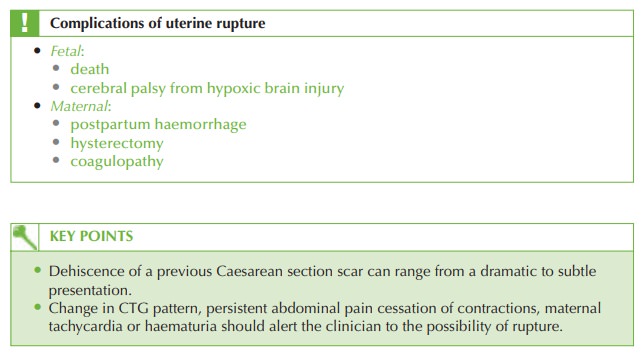