Questions · Describe the CTG · What is the likely diagnosis? · How would you confirm the diagnosis and manage this situation?

A 22-year-old woman is admitted to the labour ward for induction of labour at 39 weeks’ gestation. This is her first ongoing pregnancy, having had a first-trimester miscarriage 13 months previously. She booked at 9 weeks and had normal booking blood tests, and 11–14-week scan and 21-week anomaly scan did not show any obvious fetal abnor- mality. Blood pressure and urinalysis have always been normal.

At her 32 week midwife appointment she reported feeling very uncomfortable abdom- inally, and the midwife measured the symphysiofundal height to be 36 cm. A further ultra- sound scan was therefore requested whish showed normal fetal growth but increased liquor volume. She had been reviewed in the antenatal clinic and was tested for gesta- tional diabetes with glucose tolerance test but this was normal. Subsequent examinations had again confirmed an increased symphysiofundal height, and further ultrasound scan at 36 weeks again showed normal growth, no fetal abnormality and markedly increased liquor volume. The fetal movements had always been normal.

A decision had been made for induction of labour at 40 weeks because the woman had become so uncomfortable and breathless.

On palpation the fetus was cephalic with the head 4/5 palpable abdominally. Cardio- tocograph (CTG) was reassuring; 2 mg of prostaglandin gel had been inserted into the posterior fornix of the vagina and CTG monitoring continued for a further 20 min.

The woman then mobilized and contractions started within an hour. She requested an epidural for analgesia and while this was being prepared CTG monitoring was com- menced. At this stage, spontaneous rupture of membranes occurred with a very large vol- ume of clear liquor soaking the bed sheets. 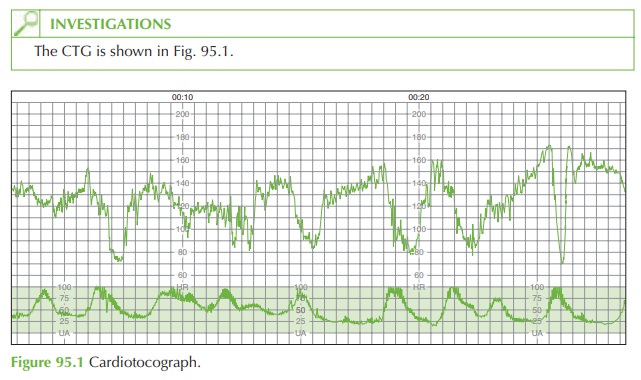 The CTG shows deep variable decelerations. The sudden CTG deterioration after rupture of membranes in a woman with polyhydramnios suggests the likelihood of prolapse of the cord. Other possible diagnoses are placental abruption or fetal head compression from precipitate labour. The diagnosis is easily confirmed with vaginal examination. A loop of umbilical cord will be palpated in the vagina and will be pulsatile.

This is an obstetric emergency and the emergency bell should be activated with the senior midwife, theatre team, senior obstetrician, paediatrician and anaesthetist sum- moned immediately.

The important management steps are:

·              the woman should be rotated into the ‘all-fours position’ (head lower than buttocks), which will facilitate relieving the weight of the baby and abdomen from the prolapsed cord

·              she should be transferred to theatre immediately for Caesarean section

·              intravenous access should be obtained, and a general anaesthetic administered, using a rapid sequence induction with cricoid pressure

·              the examiner should only remove their fingers from the presenting part in the vagina when the uterus has been opened and the baby is being delivered.