She feels well in herself except for swollen legs. She denies any headache or blurring of vision.

She has oedema to the mid calves and her fingers are swollen such that she cannot remove her rings. Abdominal palpation is non-tender and the symphysiofundal height is 39 cm. Reflexes are normal. 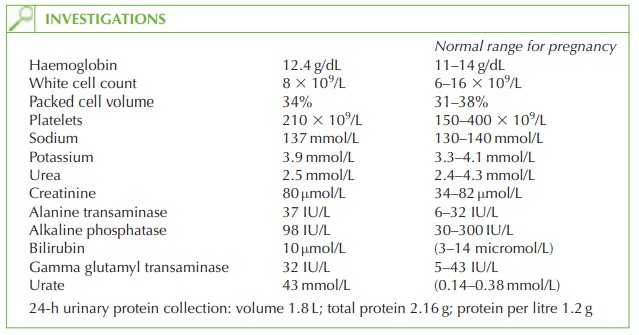 The haemoglobin and packed cell volume suggest mild haemoconcentration. The platelet count is normal for pregnancy, though low for a non-pregnant person. Electrolytes are within the normal range but the creatinine is higher than normal for pregnancy. Alkaline phosphatase is always raised in pregnancy due to its production by the placenta. However the alanine transaminase is abnormal.

A normal urate value correlates with gestational age (the urate level should not be more than the number of weeks gestation) and therefore the level of 43 mmol/L is high. Finally, the 24-h urinary protein measurement, performed to quantify the degree of proteinuria, has shown a significantly raised result.

This woman thus has pregnancy-induced hypertension (PIH) with proteinuria, abnormal liver function and raised serum creatinine and urate. This is known as pre-eclampsia. The condition commonly occurs in asymptomatic women and the severity of symptoms often does not correlate with the disease severity.

No further maternal investigations are needed but fetal wellbeing needs to be assessed by cardiotocograph and ultrasound assessment for fetal growth and liquor volume in view of the association between pre-eclampsia and intrauterine growth restriction.

Induction of labour as soon as possible is indicated, as the fetus is beyond 37 weeks and delay might increase the likelihood of fulminating pre-eclampsia in the mother or fetal compromise, including placental abruption. There is no indication for Caesarean section unless induction is unsuccessful or fetal compromise occurs before or during labour. Close monitoring of blood pressure is imperative during and after labour, as many eclamptic fits occur postnatally.

She remained in hospital for 5 days postpartum for blood pressure monitoring, during which time her blood results returned to normal. Postnatally she was converted to oral labetalol for 6 weeks, after which blood pressure was normal, and treatment discontinued.