31. Give the general characteristics of organic compounds?

● They are convalent compounds of carbon.

● They are insoluble in water and readily soluble in organic solvent such as benzene, toluene, ether, chloroform etc.......

● Many of the organic compounds are inflammable (except CCl4)

● They possess low boiling and melting points due to their convalent nature.

● They are characterised by homologous series.

32. Describe the classification of organic compounds based on their structure. 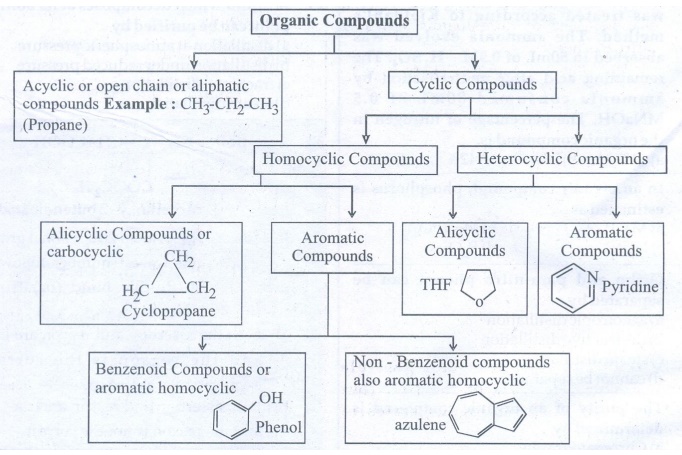 33. Write a note on homologous series.

Homologous series : A series of organic compounds each containing a characteristic functional group and the successive members differ from each other in moleculr formula by a CH2 group is called homologous series. Eg Alkanes : Methane (CH4), Ethane (C2H6), Propane (C3H8) etc...

● Compounds of the homologous series are represented by a general formula Alkanes CnH2n+ 2 Alkenes CnH2n , Alkynes CnH2n- 2 and can be prepared by general methods.

● They show regular graduation in physical properties but have almost similar chemical property.

A functional group is an atom or a specific combination of bonded atoms that react in a characteristic way irrespective of the organic molecule in which it is present. 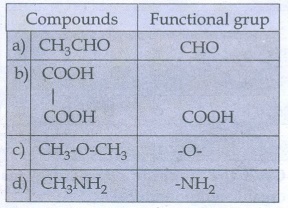 35. Give the general formula for the following classes of organic compounds

36. Write the molecular formula of the first six members of homologous series of nitro alkanes.

37. Write the molecular and possible structural formula of the first four members of homologous series of carboxylic acids. 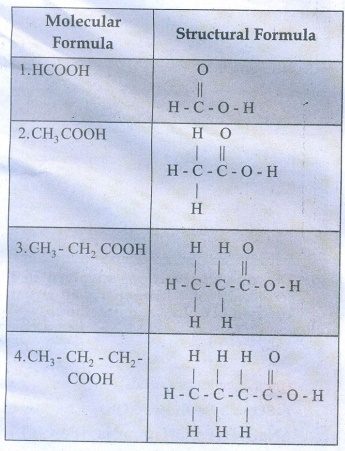 38. Give the IUPAC names of the following compounds. 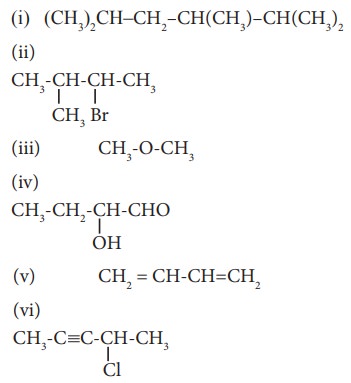 39. Give the structure for the following compound.

40. Describe the reactions involved in the detection of nitrogen in an organic compound by Lassaigne method.

41. Give the principle involved in the estimation of halogen in an organic compound by carius method.

A known mass of the organic compound is heated with fuming HNO3 and AgNO3. C, H & S get oxidized to CO2, H2O & SO2 and halogen combines with AgNO3 to form a precipitate of silver halide.

The ppt of AgX is filtered, washed, dried and weighed. From the mass of AgX and the mass of the organic compound taken, percentage of halogens are calculated.

42. Give a brief description of the principles of i) Fractional distillation ii) Column Chromatography

● This is one method to purify and separate liquids present in the mixture having their boiling point close to each other.

● A thermometer is fitted in the fractionating column near the mouth of the condenser.

● This will enable to record the temperature of vapour passing over the condenser.

● The process of separation of the components in a liquid mixture at their respective boiling points in the form of vapours and the subsequent condensation of those vapours is called fractional distillation.

● The process of fractional distillation is repeated, if necessary.

● This method finds a remarkable application in distillation of petroleum, coal-tar and crude oil.

● This is the simplest chromatographic method carried out in long glass cloumn having a stop cock near the lower end.

● This method involves separation of a mixture over a column of adsorbent (Stationery phase) packed.

● In the column a plug of cotton or glass wool is placed at the lower end of the column to support the adsorbent powder.

● The mixture to be separated is placed on the top of the adsorbent column. Eluent which is a liquid or a mixture of liquids is allowed to flow down the column slowly. Different components depending upon the degress to which the componenets are adsorbed and complete separation takes place.

● The most readily adsorbed substances are retained near the top and others come down to various distances in the column.

● A strip of paper acts as an adsobent. This method involves continoues differential portioning of components of a mixture between stationary and mobile phase.

● A strip of chromatographic paper spotted at the base with the solution of the mixture is suspended in a suitable solvent which act as the mobile phase.

● The solvent rises up and flows over the spot. The paper selectively retains different components according to their different partition in the two phases where a chromatogram is developed.

● The spots of the separated colored compounds are visible at different heights from the position of initial spots on the chromatogram.

● The spots of the separated colorless compounds may be observed either under ultraviolent light or by the use of an appropriate spray reagent.

This type of Isomers have same molecular formula but differ in their bonding sequence.

|→ a) Chain or nuclear or skeletal isomerism 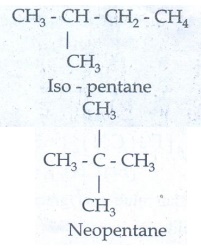 Isomers with the same molecular formula and carbon skeleton but differ in the position of substituent or functional group or an unsaturated linkage.

2) Some organic compounds such as glucose have the ability to rotate the plane polarized light and they are said to be optically active compounds and this property of a compound is called optical activity.

3) The optical isomer, which rotates the plane of the plane polarised light to the right or in clock wise direction is said to be dextrorotatary (dexter means right) denoted by the sign (+).

4) Where as the compound which rotates to the left or anticlock wise is said to be leavo rotatory (leavues means left) denoted by sign(-).

46. Briefly explain geometrical isomerism in alkene by considering 2- butene as an example.

● Geometrical isomers which have different arrangement of groups or atoms around a c=c. This isomeris occur due to restricted rotation of double bonds, or about single bonds in cyclic compounds.

● The cis isomer is one in which two similar groups are on the same side of the double bond.

● The trans isomer is that in which the two similar groups are on the opposite side of the double bond.

49. 0.32 g of an organic compound, after heating with fuming nitric acid and barium nitrate crystals is a sealed tube game 0.466 g of barium sulphate. Determine the percentage of sulphur in the compound.

50. 0.24g of an organic compound gave 0.287 g of silver chloride in the carius method. Calculate the percentage of chlorine in the compound.

51. In the estimation of nitrogen present in an organic compound by Dumas method 0.35 g yielded 20.7 mL of nitrogen at 150 C and 760 mm pressure. Calculate the percentage of nitrogen in the compound

1. Give two example for each of the following type of organic compounds. 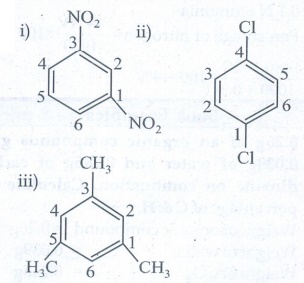 4. Write all the possible isomers of molecular formula C4H10O and identify the isomerism found in them. 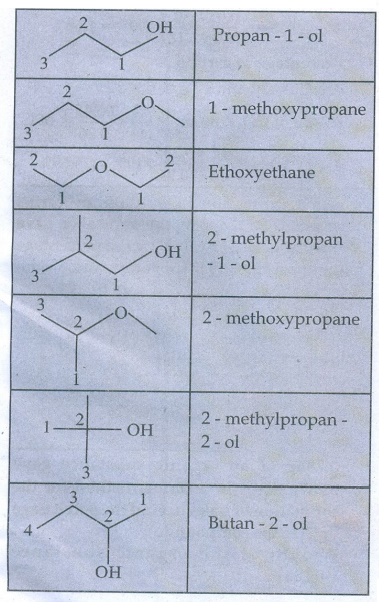 6. 0.16g of an organic compound was heated in a carius tube and H2SO4 acid formed was precipitated with BaCl2 . The mass of BaSO4 was 0.35g. Find the percentage of sulphur.

10. 0.3g of an organic compound on kjeldahl’s analysis gave enough ammonia to just neutralize 30 ml of 0.1 N H2SO4. Calculate the percentage of nitrogen is the compound.